A New Silence – The Obituaries of William Saroyan

Forty-one years ago, William Saroyan passed away at the age of 72. His star had faded significantly, but he was still being published, still in demand for speaking engagements and interviews, even if he rarely granted them. His illness was widely reported, especially following reports of an April 22nd stroke. This report may or may not have been accurate, though it was announced the following day that Saroyan was suffering from prostate cancer. The coverage of his illness included the Fresno Bee’s long-time columnist Eli Setencich’s beautiful piece called “Not Dying, Aram” which serves as both a tribute to his friend as well as a pre-obituary. Saroyan had not had a best-selling book in several years, though the final book he released during his lifetime, Obituaries, had been well-received, with United Press International critic Donald Thackrey saying, “It will be nominated for the National Book Critics Circle award – and deservedly.”

Saroyan finally expired on May 18, 1981. His final weeks had been an emotional roller coaster for William and his immediate family (much of which is detailed in son Aram’s book Last Rites) and the final breath seemed to have stoked the fire of his fame again, even if only briefly. There were dozens of obituaries written, appearing in hundreds of publications. 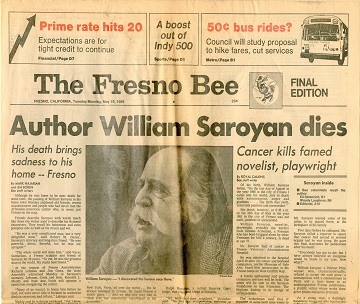 It should be no surprise that the Fresno Bee, Saroyan’s hometown paper, ran the most thorough coverage. The May 19, 1981, edition carried many tributes, some written by friends, others by staff writers. The entire upper half of the front page was dedicated to Saroyan’s passing, under the banner headline, “Author William Saroyan Dies.” The coverage inside featured three long pieces, including an uncredited editorial and a series of photos of Saroyan from across the years. This was the most coverage Saroyan’s death received at the beginning, though tributes to him would show up regularly in the Bee over the decades that followed. Several of these were from Setencich, and another notable piece, Mark Najarian’s “Soviet Armenians mourn ‘brilliant son’,” noted that the local Armenian community leaders had been receiving communications from Armenians offering their condolences.

“We are consoled only with the thought that his second life, which is immortality, starts,” Najarian reported one telegram read.

Saroyan had been good friends with San Francisco columnist Herb Caen, a legend whose career had begun in the 1930s. A venerable member of the journalism profession, he published many articles covering his exploits with Saroyan, and his piece “Gray Day in May” covered the passing. Caen recounted their friendship, begun in a San Francisco that had ceased to exist; a city where restaurant Omar Khayham’s and Izzy Gomez’s bar were powerful landmarks for their class of people. Caen noted in the piece,

"The first phone call I received yesterday morning brought the news that he had died of cancer at the age of 72 in the Veteran’s Hospital at Fresno. Although he had achieved a reasonably great age, it didn’t seem right. It is hard to think of Bill Saroyan dead – he was always so full of life. No one else seems to have so much of it, or enjoy it more."

Many other notable friends wrote important pieces for major papers, including author Herb Gold for the LA Times on the 24th of May, 1982, entitled, “He Had the Time of His Life: an Appreciation of William Saroyan.” It opens with a line that Saroyan himself might have approved of: “The daring young man has jumped off the trapeze.” This was in addition to a near full-page obituary of Saroyan that extolled him as a “California writer”*- in a piece that covered both his life and works. Written by Bill Secter, a Times staff writer, it is one of the deepest looks at Saroyan in a major market American newspaper.

The Sacramento Bee ran a long article by Fresno Bee reporter Royal Calkins called “Hardships Dominant in Saroyan’s Life” that detailed many of the issues that faced Saroyan throughout his times. It opens with a sentence quoting Saroyan that he certainly would have approved of as a tribute:

“Of his birth William Saroyan wrote ‘On the last day of August in the year 1908 in the city of Fresno I came into the world sick to death with astonishment anger and gladness — The birth was swift, relatively painless and unrecorded.’”

Tributes were written by his friends and admirers, including then-President Ronald Reagan, who penned a piece to be read at the Los Angeles celebration honoring his life.

It is a great pleasure to join with you in this tribute to "William Saroyan – A Celebration of His Life and Works.”
The son of Armenian refugees, Saroyan overcame hardship and poverty to become one of the great authors of this century. His timeless writings, which affectionately tell of average people struggling against the adversities of life, continue to arouse warmth and empathy in the hearts of audiences the world over.
Mr. Saroyan - a Californian – remained deeply tied to his special heritage. He dedicated his second volume of stories to the "English tongue, the American earth, and the Armenian spirit." William Saroyan was certainly the fiery embodiment of all three.
This nation is richer for his great talent and for his deep understanding of the human spirit and the world in which we live. His works, among the finest in American literature, will live forever as an important part of the cultural history of this nation.

The New York Times ran a substantial obituary, a portion of which appeared on the lower right-hand corner of the front page. The Washington Post provided a nearly-1500-word obituary. The two major American newswire services, the Associated Press (AP) and United Press International (UPI) each wrote 500-word obituaries that dozens of papers excerpted at various lengths. Several papers, including Newsday, which had a long-standing habit of running reviews for every Saroyan play that opened in New York, and the Boston Globe, ran Secter’s obituary from the LA Times on May 19th, and many other papers did the same on the 20th, 21st, and 22nd.

The obituaries that ran delved into his story writing, his playwriting, and his personal issues with gambling and finances. In addition to the spotlight and feature pieces written in the LA Times, in the obituary section they ran a tradition obit – “Author William Saroyan; he stressed life’s dearness.” The piece emphasized the breadth of his work, mentioning his stories, plays, and songwriting, as well as his unhappy time in the military, gambling and tax issues, and his near mania to record the last years of his life.

Television news covered Saroyan’s passing as well. All three major American networks devoted time, with CBS allotting a full minute, an amount equal to that of writer Truman Capote, artist Thomas Hart Benton, and playwright Tennessee Williams. The coverage varied, with CBS including a brief clip of Saroyan speaking. Bay Area news coverage was slightly more detailed, though this footage has yet to surface after several months of searching. It’s believed that footage was used from one of Saroyan’s appearances on Evening Magazine from the late 1970s in a CBS report on his life. 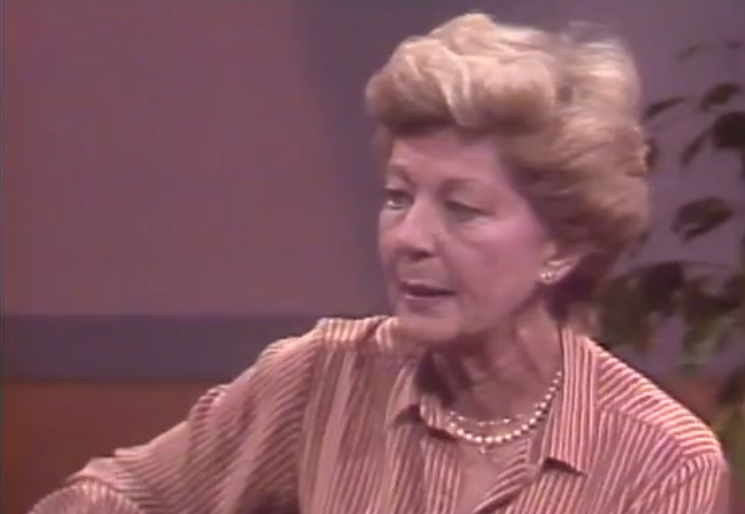 Television star Harriett Nelson appeared on KQED’s program Over Easy a little over a month after Saroyan’s death, paying a strangely beautiful tribute to him.

"Well, it was the night that William Saroyan died, and I was sitting there having my dinner by myself, which is not the happiest thing in the whole world, to sit and eat dinner by yourself. And it was on television and they came on, said that Saroyan had died. And I thought, oh, what a loss. You know, what a wonderful mind, we're going to miss him so. And then they said that his last words were that he knew it was inevitable, but he thought he was going to be the exception. Wonderful mind. At a time like that, he could think of something like that to say. And I laughed out loud. And it was the first time I laughed out loud in six years."

Often, when a major figure in arts and letters dies, the poets come out to speak in their own poetic language. California’s Poet Laureate Charles Garrigus wrote a poem called For William Saroyan, first appearing in the Fresno Bee on May 21st, 1981. 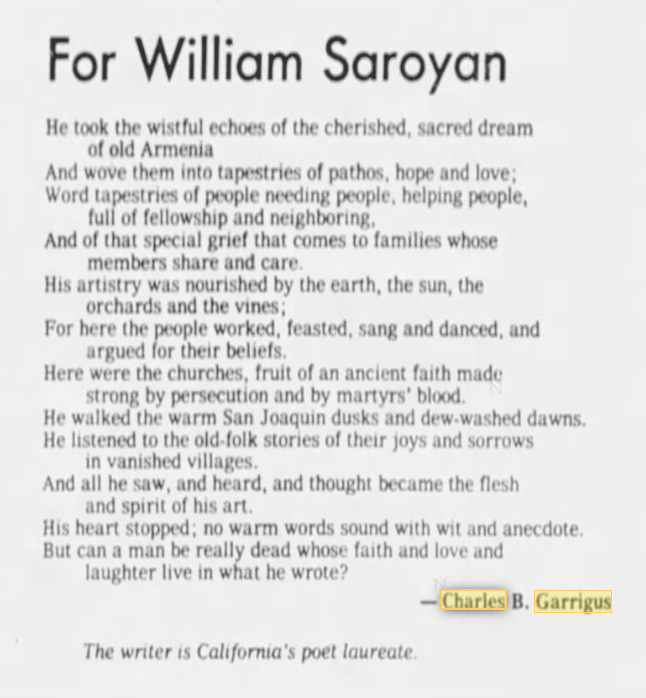 He took the wistful echoes of the cherished, sacred dream of old Armenia and wove them into tapestries of pathos, hope and love;
Word tapestries of people needing people, helping people, full of fellowship and neighboring,
And of that special grief that comes to families whose members share and care.
His artistry was nourished by the earth, the sun, the orchards and the vines;
For here the people worked, feasted, sang and danced, and argued for their beliefs.

Here were the churches, fruit of an ancient faith made strong by persecution and by martyrs’ blood.
He walked the warm San Joaquin dusks and dew-washed dawns.
He listened to the old-folk stories of their joys and sorrows in vanished villages.
And all he saw, and heard, and thought became the flesh and spirit of his art.
His heart stopped, no warm words sound with wit and anecdote.
But can a man be really dead whose faith and love and laughter live in what he wrote?

The most poignant poetic tribute to Saroyan was written by his cousin and dearest friend, Archie Minasian. A painter of both houses and remarkable watercolors, as well as Saroyan’s favorite barber. Their correspondence, much of which is collected in William Saroyan & Archie Minasian: The Complete Correspondence, 1929–1981, lasted decades. When Saroyan passed, Minasian composed a poem that appeared in Selected Poems that paid final tribute to his dear cousin.

Soon they will be off
In the morning sky
And he will be with them.

The coverage of William Saroyan’s passing faded from newspapers, initially caught up in the endless news cycle that included the assassination attempt on Pope John Paul II, the Atlanta Child Murders conclusion, the break-up of MGM/UA, the first public announcement of the AIDS virus, the death of Saroyan’s friend George Jessell, and on and on. Magazines such as Time and Newsweek dedicated small space to announcing his passing, and many of the magazines that had once been the leading locations for his prose, including Playboy and the Saturday Evening Post, had little to no coverage at the time. Saroyan’s memory would be rekindled over the next few years, with magazines reprinting old pieces they’d once run or submissions they’d held on to.  Another re-birth of sorts began with the 1982 publication of Last Rites by his son Aram, followed by two biographies about William, and several adaptations of Saroyan’s works, including the musical version of The Human Comedy. The effect was a posthumous life of a character, as much as that of a writer. Perhaps William would have wanted it that way.