He was Willie to his family, Bill to his friends, and William to the public. A man of various talents and personas, his readers knew him through his semi-autobiographical short stories, but the private man remained known only to his family and close friends.

Born in 1908, the fourth child of a poor Armenian immigrant family, Saroyan grew up in a community that managed to escape the genocide in Armenia. Surrounded by love but not much food, the family struggled to build a new life in the agricultural community of Fresno. At three years old, Saroyan lost his father, Armenak, to a burst appendix. His mother, Takoohi, found work in San Francisco and moved her four children to an orphanage in Oakland where they spent the next five years until returning to Fresno in 1916. After ten years working and saving money in Fresno, the Saroyans moved to San Francisco, where his mother and sister, Cosette, lived until their deaths, and where William lived for many years on and off. Saroyan used the rich collection of characters in both Fresno and San Francisco to delight readers and ultimately analyze the human condition. Although Saroyan was born in California, he carried with him the trauma of the Armenian Diaspora, viewing his world through two striking lenses that were each unusual to the American public.

In 1934, twenty-six-year-old Saroyan debuted on the American literary landscape with the short story collection, The Daring Young Man on the Flying Trapeze and Other Stories, garnering accolades and positive reception from critics. His writing – unconventional, rhythmic, confidently fresh - excited a country in the depths of the Depression. At a time when his Salinas Valley contemporary John Steinbeck was writing about the gritty realities of working life in California, Saroyan presented a hopeful view of humanity, highlighting the California that was a haven for hard-working immigrants who, while they struggled, also celebrated life in their adopted land. Until his death in 1981, Saroyan wrote about his lived experiences, harnessing stories from his own life and the lives of his family, imbuing his stories with the surprising combination of authenticity and parable. A pacifist and iconoclast, Saroyan’s draft into the army during World War II did not suit him and led to resentment and depression, somewhat poisoning the sense of wonder and innocence he had developed in his writing before the war. His marriage to Carol Marcus in 1943 and subsequent role of father to Aram and Lucy Saroyan were uneasy periods in Saroyan’s life as well, ultimately leading to divorce and occasional estrangement from his children. He spent the last years of his life splitting time between an apartment in Paris and a house in Fresno, where he died of prostate cancer at the age of 72. 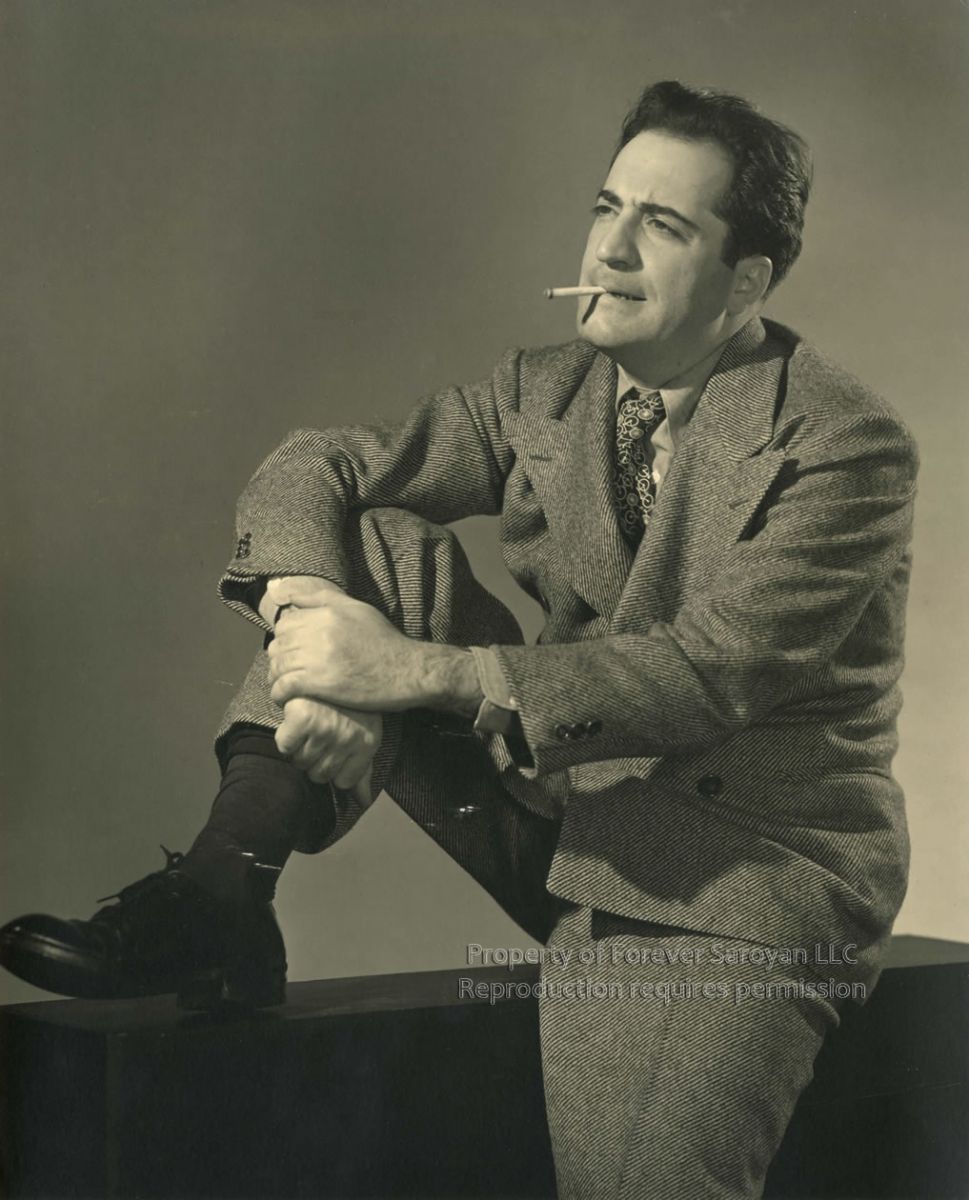 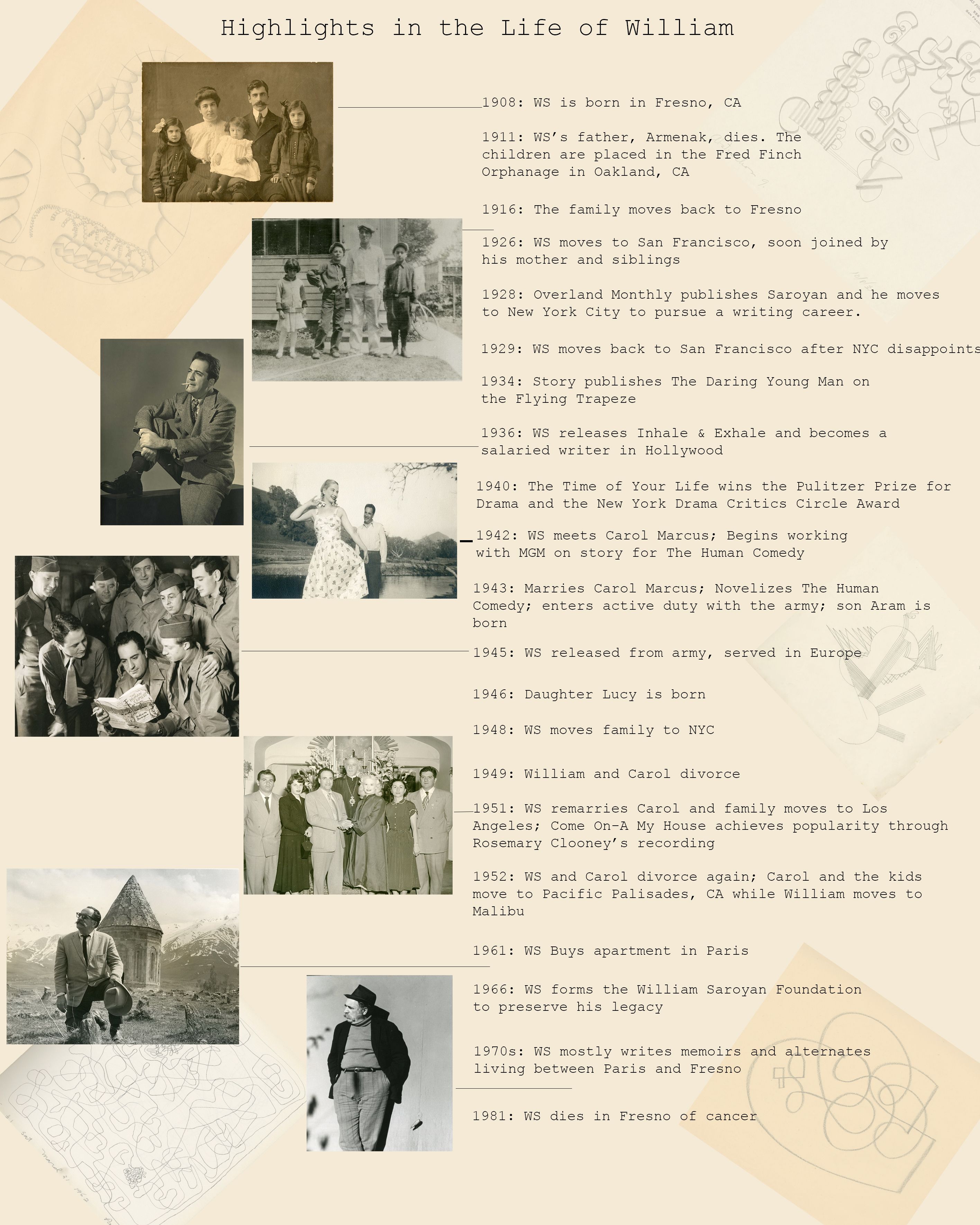 William Saroyan In His Own Words 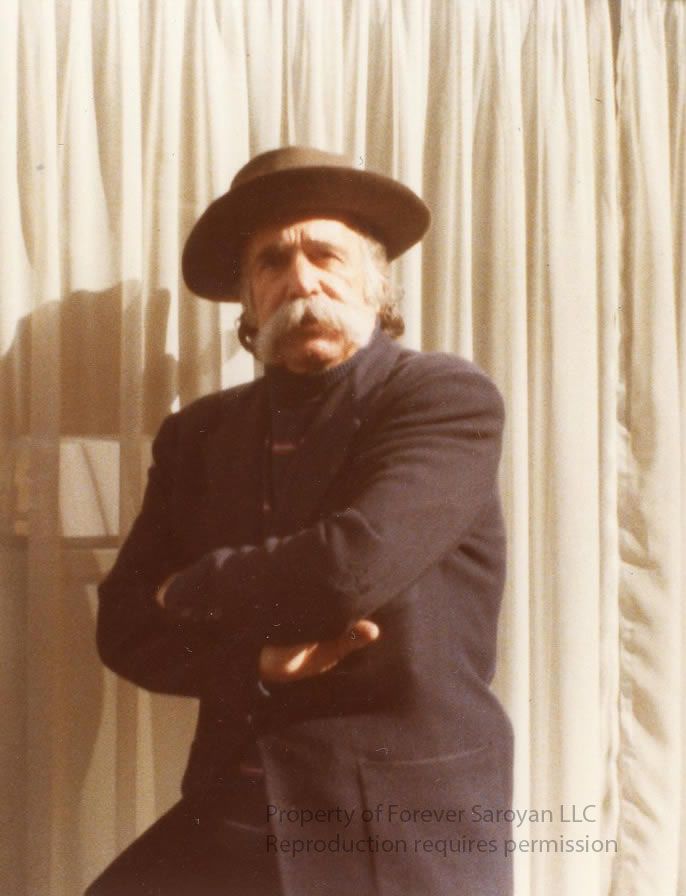 Saroyan’s Origin Story, "The Grapes"
Excerpted in its entirety from The Saroyan Special, 1948

According to the story, I came about among weeds and broken glass, while the bell of a Southern Pacific freight locomotive tolled in the hot August night from just across H Street, in Fresno, California.

My father was on a vineyard in Sanger, twelve miles east, trying to gather the pieces together of a preacher without a pulpit and a poet without a reader.

My mother was hushed and angry in the unlighted ramshackle house, because now here was one more, making four, two daughters born in Bitlis, in 1899 and in 1902, a son born in Erzeroum in 1905, and now another son, in 1908, myself.

You've read this sort of thing before. So I was born. So what? Who wasn't? Who cares about that? Get along to the story.

But then this is the story, this is always at least the beginning of it, and at the same time it is also always the one thing that is there all through the rest of it, because once you are born, that's it, you've got it, you've had it, you are the one you are, you are not anybody else just born.

I was the last of four, although nobody was sure there weren't to be any more, or that my father was less than three years from the end of putting on and taking off his shoes. And there was Fresno, a railroad town, nothing like Boston, New York, Charleston, New Orleans, Chicago, Denver, or San Francisco. A nothing place, with eleven thousand people, streets A to U from west to east, and from south to north with names like San Benito, Santa Clara, Ventura, Mono, Mariposa, Caliveras, Divisadero, Tulare, and so on: Spanish, Mexican, Indian. And there, all through the town, were the Armenians, from Bitlis, Van, Moush, Harpoot, Erzeroum, Trabizone, and Diarbakir. Fresno meant Ash Tree in Spanish, but I didn't find out until years later, and I have never knowingly seen an ash tree. The meaning of California was unknown, and how it came to be put upon that enormous area of land on the Pacific coast was also unknown. The year 1908 was the year after 1907 and the year before 1909. August 31st was the last day of the 8th month of the year. It was all nothing and nowhere, but I was there, I had just arrived, and there was no telling what it meant.

My mother's mother, Lucy Garoghlanian, widow of Minas Saroyan, was in the house, silent and not especially pleased about having given her daughter to a Presbyterian preacher who wrote poems. Every mother has always got to believe her daughter might very well have married a man of another order entirely. Who wants a son-in-law who is forever astonished by the human race and never able to understand a problem and solve it immediately? Here was America, for instance, and there was my father, but the man simply wasn't inventing automobiles, buying and selling horses, telling lies, cheating, or in any other way demonstrating a natural-born ability to be a success. The kind of man Lucy Garoghlanian, then less than forty, wanted for her daughter Takoohi, then less than twenty-five, was a man of wealth-that is, a crook from away back, with a nice crooked father-and now it was too late, four kids too late, two girls and two boys. For what? Poverty?

My father's mother, Hripsime, was not allowed in the house, most likely because she was the mother of this man who wasn't rich. She waited for word in her own nearby house, Hripsime der Hovanessian, widow of Petrus Saroyan.

Minas and Petrus, although both named Saroyan, were not related, Petrus having become a Saroyan by adoption. I don't know what his father's name had been but it certainly hadn't been Saroyan, and so there it is at the outset, the problem of the name.

By rights my family name should be the name of the father of my paternal grandfather, Petrus. It doesn't really matter, though, because it would have been a name something like Saroyan: Krikorian, Avakian, Hovsepian, Muradian, and so on.

My mother said: "Cosette, Zabel, Henry, and now what strange name is he going to give to this one?"

He came in from Sanger on a bicycle the following day and gave him the strange name of William, after his friend Dr. William Stonehill of New York, also a Presbyterian preacher, deceased three months. He wrote the name, place, and date in the family Bible, and years later I read it in English, and studied the same stuff written again in Armenian. So that was it, then, was it? William Saroyan and so on and so forth, may God love him or some such thing. And then he rode the bicycle back to Sanger, to the vineyard of his mother's sister's boys, the Muradian brothers, his cousins, where he was trying to get the hang of being a worker on a vineyard at harvest time. I suppose he was picking grapes, and I hope every now and then he was stopping to eat some.

The best thing about the whole place was the grapes: the vineyards, the vines, the leaves, and the grapes. If anything means anything to me grapes do.

In London, in 1944, I used to pay a British pound for a bunch of grapes. I ate the grapes and remembered Fresno, my father long dead, my mother at last in a brand-new home of her own in San Francisco. In those days a British pound was worth about five dollars, and the only grapes to be had in London were from hothouses. I took Shaw a bunch of muscats and a bunch of ribiers, a yellow melon, and other fruit and vegetables, but Shaw was a real comic cut-up when he wanted to be, and he didn't get the idea of the basket of fruit and vegetables. He thought it was the occasion for another famous Shaw witticism, or whatever you might care to call a bright saying by an old man.

"Why does everybody in America think I need food? I have all I want. I can't possibly use any more. I'll have to give the stuff to the neighbors. I don't need it." (Well, now, why don't you just settle down quietly and let the matter rest a moment, and after I get out of here, why don't you just pick up a bunch of muscats and just pluck one grape from the bunch and put it into your big loud mouth and eat it and not feel you have always got to be a great comic cut-up, because the fact is, you need grapes, you need them badly.)

"Well, I know you don't eat meat, so I brought stuff you do eat, that's all. No harm meant.”

If he had to be a comic cut-up, so did I. I was the greatest comic cut-up in the history of Emerson School. What comparable reputation did he have? I didn't mention, but not on purpose, that Takoohi Saroyan stood and held the edge of an open door at the time of the birth, so I'm mentioning it now, as it may be of interest to somebody. The midwife was an old woman called Ohskoh , a distant relative who enjoyed a great light-hearted reputation and knew her work well, knew women, knew kids getting themselves out, what to do, when to do it, how to do it, and not let it get to be any thing like a big deal of any kind. She spoke softly all the time, not about what was happening, but about people, long since born and lately foolish. She gossiped, laughed softly, put her hands over the hands of the woman getting the child out of her, and soon it was all over, and there he was.

Outside, the weeds fought the heat, the broken glass cooled a little among the weeds, the locomotive bell tolled, and a hobo just off the train from San Francisco walked silently past the house.

'I’m a poet, a preacher, I speak and read and write English, I can take a pulpit and give an extemporaneous sermon that people can never forget, what am I doing picking grapes on a hot vineyard twelve miles east of a desolate town called Fresno? What in the world brought me to Fresno?"

Whatever it was, that's where I began-in the ramshackle house on H Street with the smell of the kerosene lamps mingling with the smell of flypaper. Had I perhaps done it? Had I sent him nine thousand miles from Bitlis to H Street in Fresno?

Does the father decide, or does the son? Or does no one?