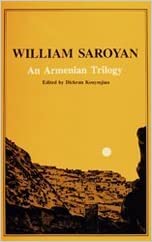 Starting in 1973, William Saroyan began what has come to be known as An Armenian Trilogy. In these three plays, Saroyan reflects on the Armenian diaspora, the nature of Armenian-ness, and his own set of life experiences. It is a deeply personal set of plays, largely unknown today, and some of Saroyan's most evocative writing for the stage.

In the 1986 publication of An Armenian Trilogy, editor Dickran Kouymjian describes the play's setting:

The action in the original scenes one through seven (Act One) takes place in the Holy Trinity Armenian Apostolic Church in Fresno, still on the corner of Ventura and M Street in the heart of what was once the Armenian town of Saroyan's youth. He called it the Red Brick Church because of the building material used to erect it in 1914. Act Two, scenes eight through twenty-one, takes place just across Ventura in the Armenian Patriotic Club, called until recent years the Asbarez Club after the Armenian newspaper of that name moved to Los Angeles in 1974.

The first play, Armenians recreates the author's native Fresno circa 1921. Homelessness, angst, radical doubt­- the leitmotifs belong to literary modernism. One character's speech recalls Gayev in Chekhov's The Cherry Orchard: "Again we have failed . We cannot even talk together about the same thing. Our minds wander. Well, all the same, I say long live Armenia ." As in Chekhov, characters assert strong positions and in the same breath withdraw them.
In Armenians all characters but one endure this psychic immobility which matches their claustrophobic sur­roundings. That one character-the Reverend Knadjian, modeled on the minister who gave books to the young Saroyan-confesses a rather peculiar habit.
"I write history. Well at any rate I write what I have felt, and of course I also invent out of these things a kind of truth which I feel is greater than factual truth. Armenian truth."

Armenians (Also called The Armenians) had its premiere at the Diocese of the Armenian Church in America in the Haig Kavookjian Armenian Arts Center in New York City on October 22nd, 1974. The show was directed by Ed Setrakian.

The following piece was originally published in the January 1975 issue of The Armenian Church, and later included in the 1986 publication of An Armenian Trilogy, edited by Dickran Kouymjian.

ARMENIANS BY WILLIAM SAROYAN
Program Note by the Author 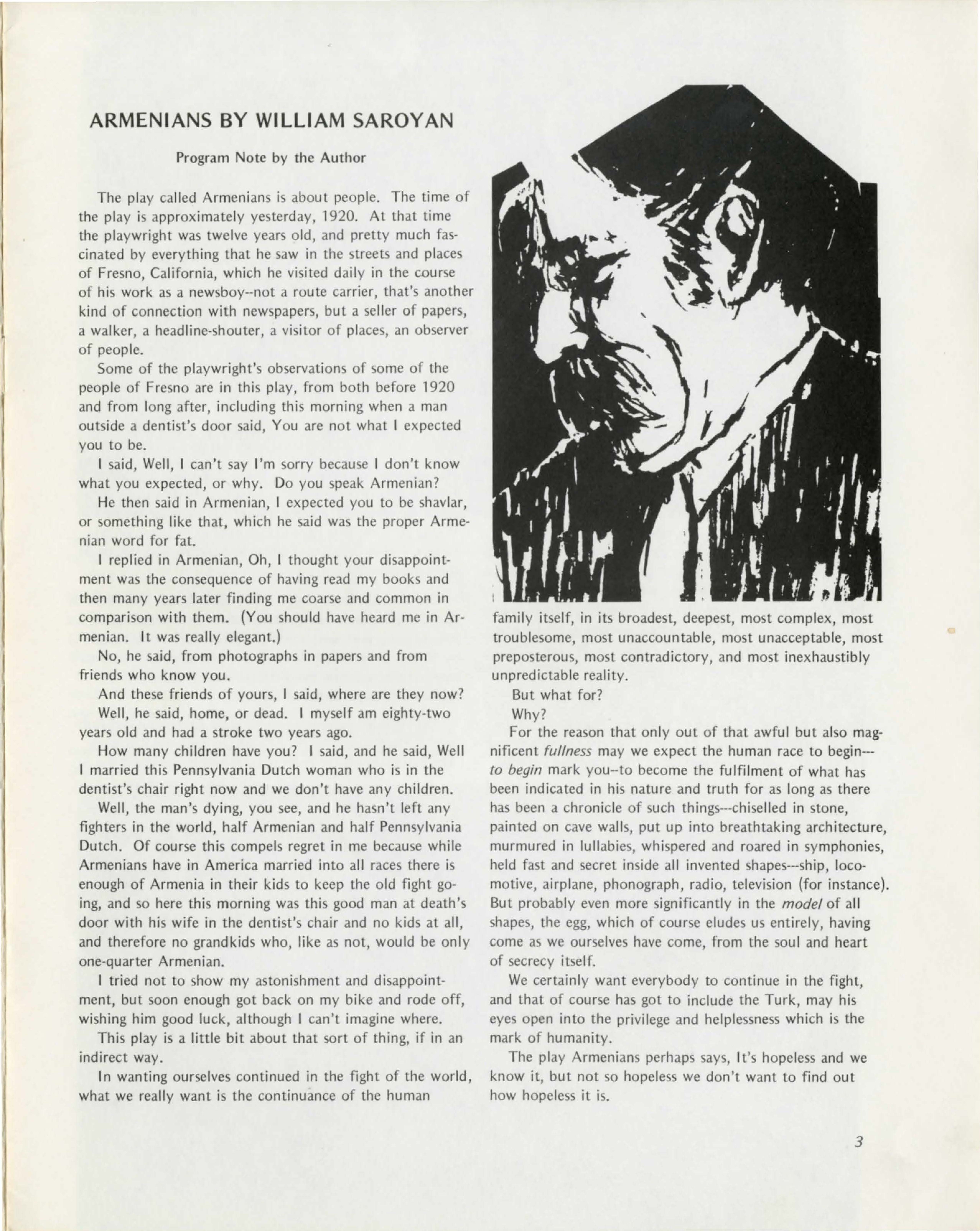 The play called Armenians is about people. The time of the play is approximately yesterday, 1920. At that time the playwright was twelve years old, and pretty much fascinated by everything that he saw in the streets and places of Fresno, California, which he visited daily in the course of his work as a newsboy-not a route carrier, that's another kind of connection with newspapers, but a seller of papers, a walker, a headline-shouter, a visitor of places, an observer of people.

Some of the playwright's observations of some of the people of Fresno are in this play, from both before 1920 and from long after, including this morning when a man outside a dentist's door said, You are not what I expected you to be.

I said, Well, I can't say I'm sorry because I don't know what you expected, or why. Do you speak Armenian?

He then said in Armenian, I expected you to be shavlar, or something like that, which he said was the proper Armenian word for fat.

I replied in Armenian, Oh, I thought your disappointment was the consequence of having read my book and then many years later finding me coarse and common in comparison with them. (You should have heard me in Armenian. It was really elegant.)

No, he said, from photographs in papers and from friends who know you.

And these friends of yours, I said, where are they now?

Well, he said, home, or dead. I myself am eighty-two years old and had a stroke two years ago.

How many children have you? I said, and he said, Well I married this Pennsylvania Dutch woman who is in the dentist's chair right now and we don't have any children.

Well, the man's dying, you see, and he hasn't left any fighters in the world, half Armenian and half Pennsylvania Dutch. Of course this compels regret in me because while Armenians have in America married into all races there is enough of Armenia in their kids to keep the old fight going, and so here this morning was this good man at death's door with his wife in the dentist's chair and no kids at all, and therefore no grandkids who, like as not, would be only one-quarter Armenian.

I tried not to show my astonishment and disappointment, but soon enough got back on my bike and rode off, wishing him good luck, although I can't imagine where.

This play is a little bit about that sort of thing, if in an indirect way.

In wanting ourselves continued in the fight of the world, what we really want is the continuance of the human family itself, in its broadest, deepest, most complex, most troublesome, most unaccountable, most unacceptable, most preposterous, most contradictory, and most inexhaustibly unpredictable reality.

For the reason that only out of that awful but also magnificent fullness may we expect the human race to begin- to begin mark you- to become the fulfilment of what has been indicated in his nature and truth for as long as there has been a chronicle of such things- chiselled in stone, painted on cave walls, put up into breathtaking architecture, murmured in lullabies, whispered and roared in symphonies, held fast and secret inside all invented shapes---ship, locomotive, airplane, phonograph, radio, television (for instance). But probably even more significantly in the model of all shapes, the egg, which of course eludes us entirely, having come as we ourselves have come, from the soul and heart of secrecy itself.

We certainly want everybody to continue in the fight, and that of course has got to include the Turk, may his eyes open into the privilege and helplessness which is the mark of humanity.

The play Armenians perhaps says, It's hopeless and we know it, but not so hopeless we don't want to find out how hopeless it is. 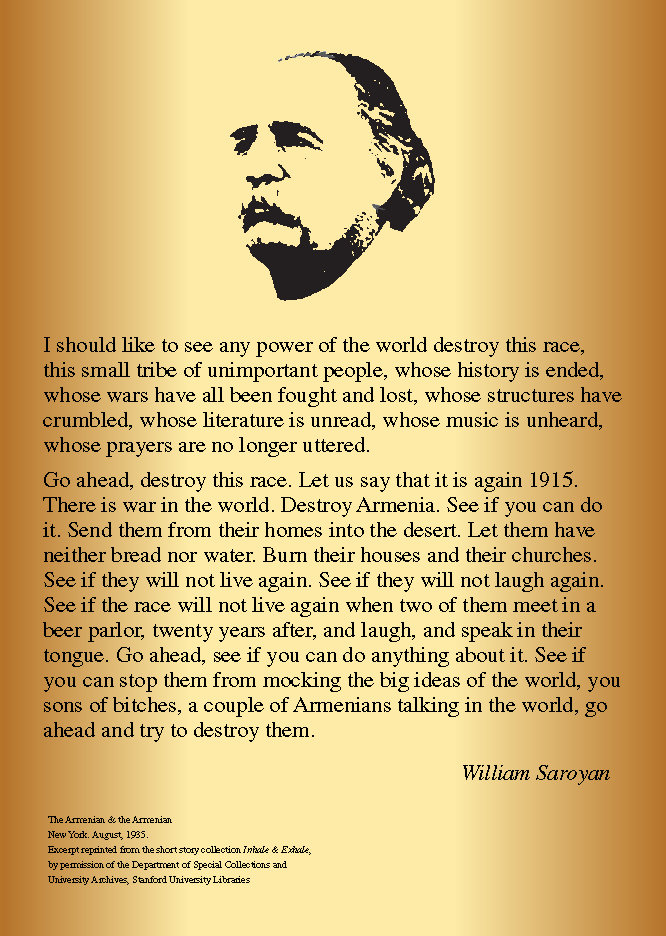