\Welcome back to the Place of Places, a chapter by chapter analysis of William Saroyan’s 1972 memoir, Places Where I’ve Done Time. Today we go back to the Attic Room, Fred Finch Orphanage, Oakland, 1912. 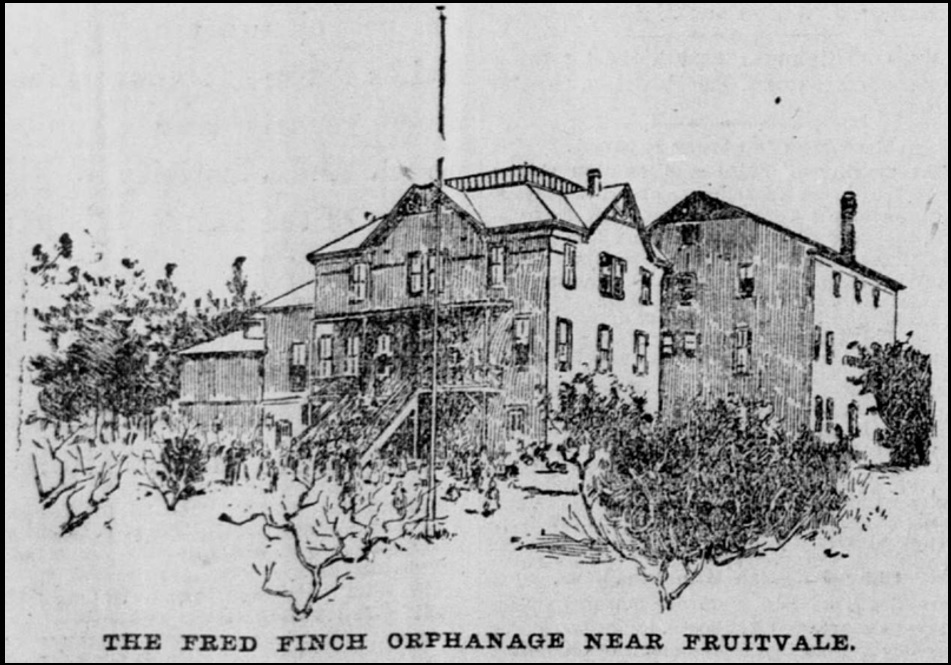 This is a heartbreaking chapter. Four-year-old Willie is struck with an illness at the Fred Finch Orphanage. He is quarantined and isolated in the attic, with nothing to distract him from his fever and discomfort. It’s Christmas Eve and he can hear the other children singing O Holy Night. All he wants is his mother, who is working as domestic help at a house on Laguna Street across the bay in San Francisco. But she doesn’t come to him, quite probably doesn’t even know he is ill.

It sounds like the stuff of nightmares. Relegated to a room that wasn’t really a room, the attic, and hearing the sounds of children singing, reminding him of angels whisking him off to death. A woman wordlessly came in to check on him, offering no comfort. But he decides to live on:

“That night was one of the longest I have ever lived through. I might have died. I knew something deadly wrong had happened to me, but at that time I did not believe, I refused to believe that anything could kill me. At the same time I knew everything could, anything could – it happened every day, and it could happen to me – but I refused to believe that it could or would… I fell into delirious, painful sleep but hated it so deeply that I woke up almost instantly and waited awake, and then around daybreak I knew I had come through, and now at last I fell into real sleep – alone, and proud, and alive –now more alive than ever.” 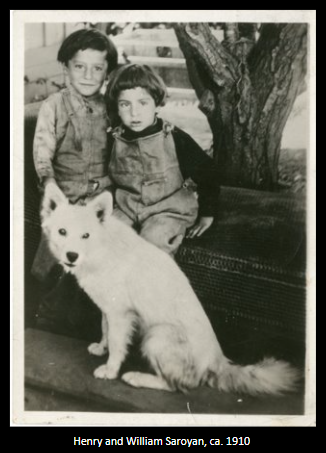 The five years he spent at the orphanage were developmentally difficult for him. Although his siblings also lived there, he didn’t always have access to them, and what he really needed and wanted was his mother, who visited briefly on weekends but who was drifting away from him as their communication began to falter. At the orphanage he only learned English, and so he didn’t understand the conversations she would have with his older sisters in Armenian, and her English was broken.

This chapter is about two major themes in his works: mothers and death. The concepts of motherhood and fatherhood were incredibly important to him. Not knowing his father beyond stories, he looked to other father figures in his life, like his uncles. But the absence of his father troubled him his whole life and made him outcast among the children in Fresno. Eventually, he wanted to become a father to truly understand the role. Equally, motherhood was important to him. He observed his own mother, his grandmother Lucine, and many other women in his life, and felt the significance of the role. Though he met Carol when she was little more than a child, he made sure she could bear him children before marrying her. He had expectations of her that matched the mothers he had known – people who cooked, cleaned, kept house, raised the family, were in some way the spiritual leaders of the family. Carol didn’t grow up like this and struggled to live up to those expectations. However, her mother was also of enormous importance in her life.

When Saroyan calls his mother “The Great One” in this chapter he’s being both very serious and a little snide. What he wanted the mothers in his life to be, none of them could fully live up to. Here, his mother couldn’t hear his cries from across the bay, and she wasn’t there to comfort him in the way he would expect the prototypical mother would and should. Instead, he felt abandoned by her at the orphanage and at other times in life. His relationship with his mother was at times strained. She worked constantly at the canneries in Fresno and also had to raise four children without their father. When Bill spent money on a typewriter as a child, she was furious, assuming there would be no money in writing. For years after that she was still not happy about his choice not to work a traditional, reliable job. Once he made good money as a writer, he bought her the house in San Francisco and continued to send money to her and his sister for their daily expenses. She was proud of him, but it took time, and he sought her approval. 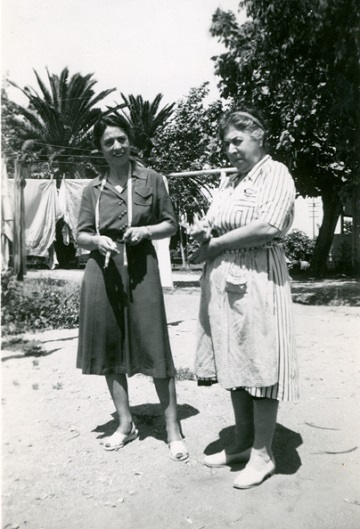 When his mother dropped her children off at the orphanage and he began to cry, she apparently responded, “No, you are a man now, and men do not cry.” So, he stopped crying. But he didn’t feel any less hurt and confused, at three years old. Once he began telling these stories about the orphanage, starting with The Bicycle Rider in Beverly Hills in 1952, the floodgates opened and his own personality development became clear to him and to others. Aram writes in his biography, William Saroyan, “If his orphanage experience had effected a kind of psychological freeze, there is evidence from Saroyan’s earliest history after the orphanage of a personal emphasis on speed, of a delight in accelerated physical mobility in general, that might be regarded as a compensation for the immobilization of his deeper reality.”

We’ve discussed the Fred Finch Orphanage in other chapters. It was a place that he considered very important in his development. Aram writes, “It may also be possible that this suppression of grief by the power of his will – initiated at the orphanage and then presumably sustained throughout Saroyan’s five years there – created that habit of extraordinary discipline which in the grown man would produce an enormous quantity of literature, a great deal of it written with unprecedented speed.” Aram explains in Last Rites that he believed his father had to become emotionally frozen in order to survive when his father and then mother abandoned him. It was Aram’s feeling that falling love with Carol thawed some of that emotional ice, which upset Bill and made him unpredictable and that he blamed Carol for this.

In this chapter, his mastery over his fear, pain, and disorientation is something to be proud of. He was evidently taught as a three-year-old that emotions were to be overcome and controlled. There in the orphanage attic, he powered through the painful emotions, writing, “I was alone, and it would never be known that I cried, but I refused. For I did not feel I was really alone as long as I was there. I was still there, changed, in trouble, burning, desperate, but I was still myself, and I lived by the law and preference that I would look after myself.”

This chapter is also about death and his complicated relationship to it. Aram suggested that being sent to the orphanage was its own kind of death -- the death of the family, the death of hope -- that was the cause of his inability to love intimately later in life. Here in this chapter Saroyan tells us that he was struggling with the concept of death as he lay feverish in the attic. This obsession followed him throughout his life, with some of his memoirs named Not Dying, Life and Death and Escape to the Moon, I Used to Believe I Had Forever Now I’m Not So Sure, and of course, Obituaries. And though he is known for celebrating life, as in the famous quote, “In the time of your life, live,” his whole career had been consumed with philosophizing about death. He wanted to understand the death of his father and he wanted to understand how he could make himself immortal through his writing legacy.

The Human Comedy centers on a missing father lost to an early death and the death of sons in war. The mother in the story tells her son, “‘You shall know your father better as you grow and know yourself better,’ she said. ‘He is not dead, because you are alive. Time and accident, illness and weariness took his body, but already you have given it back to him, younger and more eager than ever. I don’t expect you to understand anything I’m telling you. But I know you will remember this—that nothing good ever ends. If it did, there would be no people in the world—no life at all, anywhere. And the world is full of people and full of wonderful life.’” 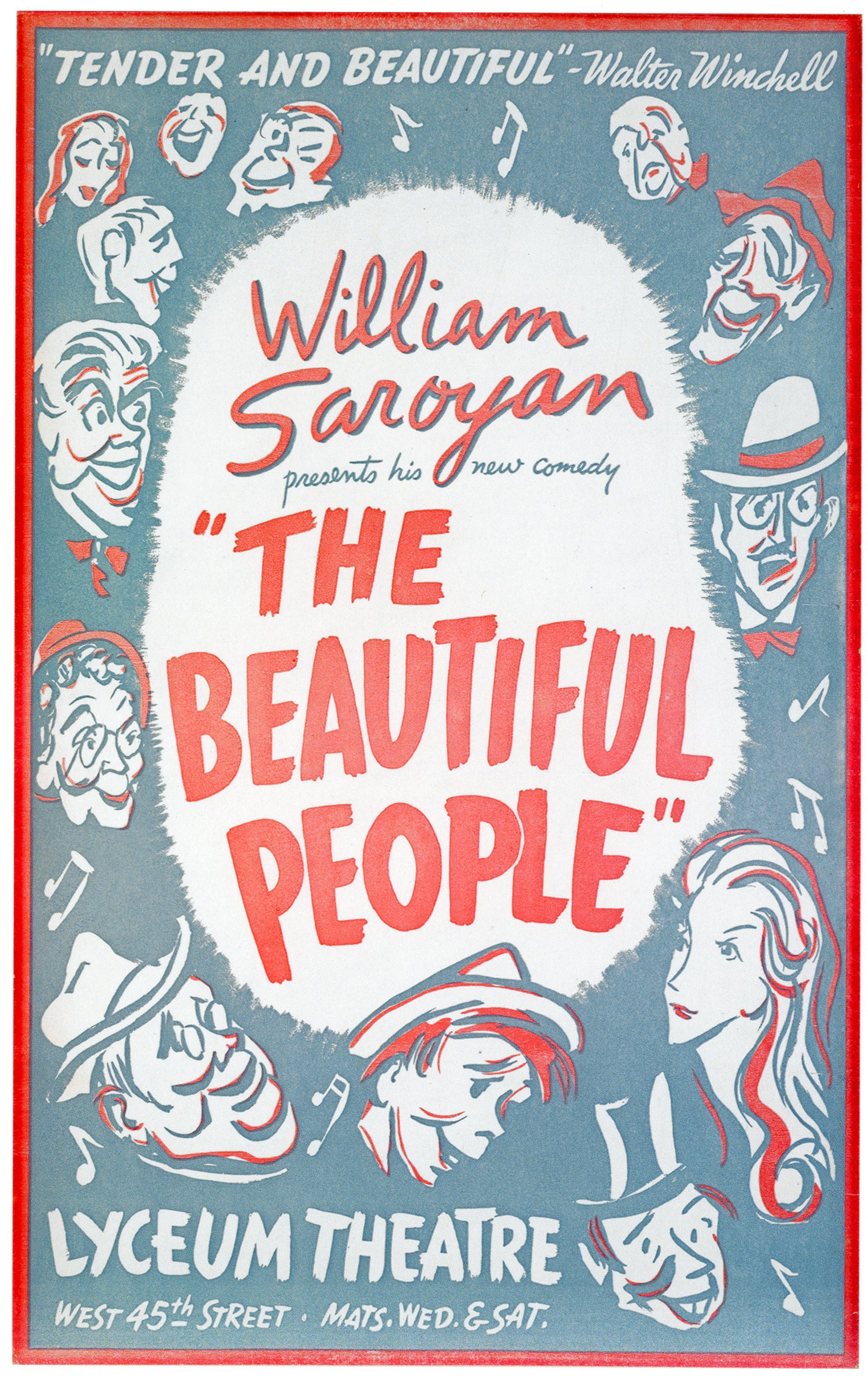 He became interested in the duality of life and death, how one couldn’t exist without the other. In The Beautiful People, he wrote, “Sooner or later everybody’s got to know that death is with us from the first breath we take.”

His early works were full of morbid curiosity and dying protagonists. In his early short stories from the 1930s, we possibly find him at his most philosophical, unburdened by the heaviness of full adulthood. In “The Gay and Melancholy Flux,” published in his sophomore effort, Inhale and Exhale in 1936, he writes, “Therefore, while is the world. I mean, word, not world, though either will do. While is the holy word. The word of God and man and earth and universe. While one thing, another. While sun and warmth, darkness and cold. While decay, growth. While laughter, weeping. While death, life. While everything, nothing. While nothing, everything. While now, never. Forever and forever.”

Later in his memoirs, he considered why this theme pervaded his works: “I have thought about death all of my life, most likely because my father died before I was three. I didn't like that. As the years go by I continue to dislike it, even though I am now fifteen years older than my father was when he died” (Here Comes There Goes You Know Who). And in the same book he writes, “I love death, I have always loved it, I have always hated it, but there is something between death and myself that is very close, closer than anything else I have with anything else, but I hate the idea of losing the sun. I want to go along with death, but I don’t want to leave the sun.”

Clearly, he had a confusing relationship with the concept of death from a young age. But this also led to an interest and perhaps fear of immortality. As previously mentioned, The William Saroyan Foundation was set up as a way to ensure his literary immortality when he believed his family would allow his legacy to shrivel. He considered art the ultimate way to live on past physical life. In The Bicycle Rider in Beverly Hills, he writes, “Every day was an adventure, a new chance to draw nearer to that great state of health which approximates immortality, where the senses are so finely alive."

This short moment on Christmas Eve in the attic of the orphanage contained the ingredients that would make a literary career, and it’s told with pathos for the child he was. In his telling, the version he wants us the readers to know, the boy overcame his longing for The Great One (his mother) and the specter of death itself. Even on his deathbed, his final quote to the Associated Press was, “Everybody has got to die, but I have always believed an exception would be made in my case. Now what?” When you read Saroyan’s works, if you haven’t noticed these themes before, pay attention to their prevalence throughout his 50 years of publishing. 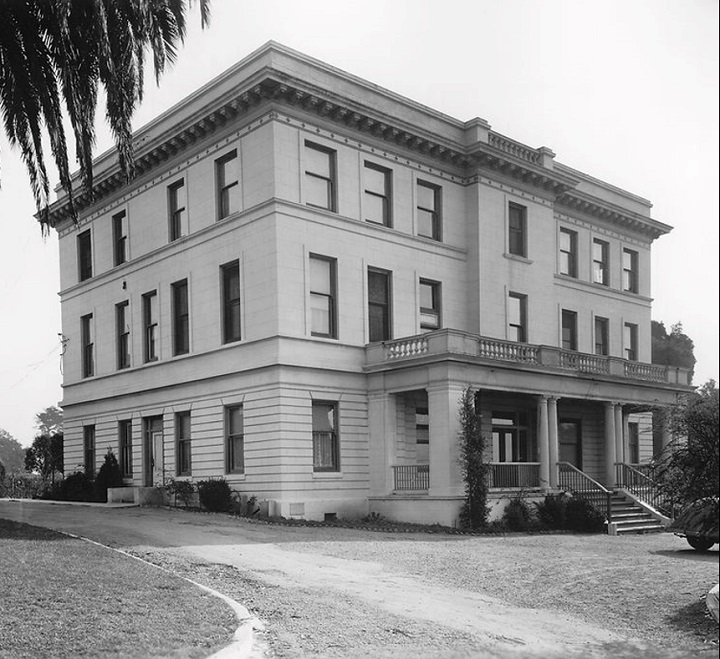