Welcome to Forever Saroyan presents - Three Times Three. This week we're looking at the story, “Baby” and it opens with a very accurate statement. – “I tried to do too much in this one.” This statement is interesting because 1) he absolutely did, and he spends most of the introduction explaining why trying to do too much always fails and how it's sometimes a personal flaw. He sees himself as not being an old enough writer to really understand when to pull back, which is a fascinating idea.

The story itself is interesting, and certainly flawed because it is largely without form, though It is highly structured, broken into a number of smaller chapters, only one of which seems to have a somewhat traditional narrative. It's that small section that shows Saroyan’s understanding of his own writing, and how he never let a single story stay a single story.

Section nine, opens as the previous eight sections with something of a think piece.

“All things exist. Revelation is the only thing. Deep within the seed is beginning and end. The wondrous world of coming go. The moment of now, yesterday is eternity lost. It's an interesting point, but that's what most of this story is. It's very philosophical. But then we get to a point where we're actually told a story. Writing nowhere on my bicycle I reached eternity. I rolled deeply into the universe and found it godly emptiness, full of all things unknown, unseen and shaped. All things of the world to be tomorrow, breathe coldly from the void. And today, a mirage of glory to come. What afternoon I delivered a death message to the mother of a jockey. I wrote to her house on Railroad Avenue, knowing the message, Mother, your son is dead. He was a good jockey. He brought in a lot of winners. He rode like a gentleman. He was loved by trainers and touts alike. Today in Chicago, he fell from his mount and was crushed under the hooves of seven horses, your son, John.

This is a remarkable left turn from the rest of this piece, which is not particularly interested in telling the story. It's telling a story in general, but here there are a couple of interesting points. First, it's that this long segment about him not wanting to deliver the message, but it being part of his job as a telegram, messenger boy. It does get very, very emotional and you kind of see him going through the stages of grief. There is 100% denial, there is bargaining, sorrow, you name it, all of it’s in here. And he delivered the message, of course. Devotees of Saroyan will know that this is a direct parallel to one of the early chapters of The Human Comedy. There, Homer McCauley is delivering messages and has to deliver the note that in World War Two, one of the women's sons has been killed. So different contexts, but the idea is the same. And even to the point where he says the following – 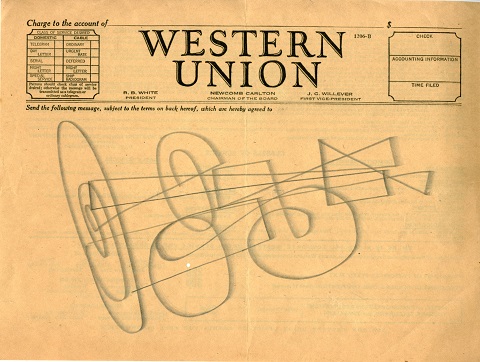 “Mrs. Krek, I said, it says here Johnny is dead. I couldn't cry, but God Almighty, she was crying, and my heart was breaking. It may be mistaken, Mrs. Krec. I said, sometimes they make a mistake. Maybe another boy was killed and they thought it was Johnny. But says Johnny, I’ll go back to the office and ask them to find out for sure. You can just go in and lie down and I'll make sure to find out for sure.

She took me by the hand and showed me a lot of old photographs of the boy. He was little guy with a pinched face who looked very sad, even when he was a baby.”

This is so much like the chapter in The Human Comedy where Homer delivers the message and it's interesting that he returned to this idea. It's more interesting that he embedded this story, this emotional, lovely story between such a chapter of literally just philosophical thought.

Here's a portion that actually gives you an interesting view.

Can you believe city subway skyscrapers ship bridge locomotive? Can you dream the dream of native and contemporary unreality and make it real? Can you believe mob? The parade of the living across the world is the life of man a life on earth or a life within the dreaming heart of the universe? Within darkness of desperate and lonely dream? Can you believe what is laughingly called civilization? The purpose of life? Is this the earth of man.

That is a very typical paragraph for this entire story, and I think one of the reasons he put it here. This very simple story, that is very beautifully executed, was dealing with the bigger ideas by inserting a moment of relatable reality, right in the middle. He gives himself the room to express emotional connection between humans because the rest of the story is about bigger connections. This section is about smaller connections, gentler, truer connections, and that that may be why he went with that idea.

Thank you for listening to Forever Saroyan Presents - Three Times Three. We'll be back after the New Year with another episode. That one will be “The Beggars” so stay tuned.