Saroyan and the Grabhorn Press: A Lasting Friendship 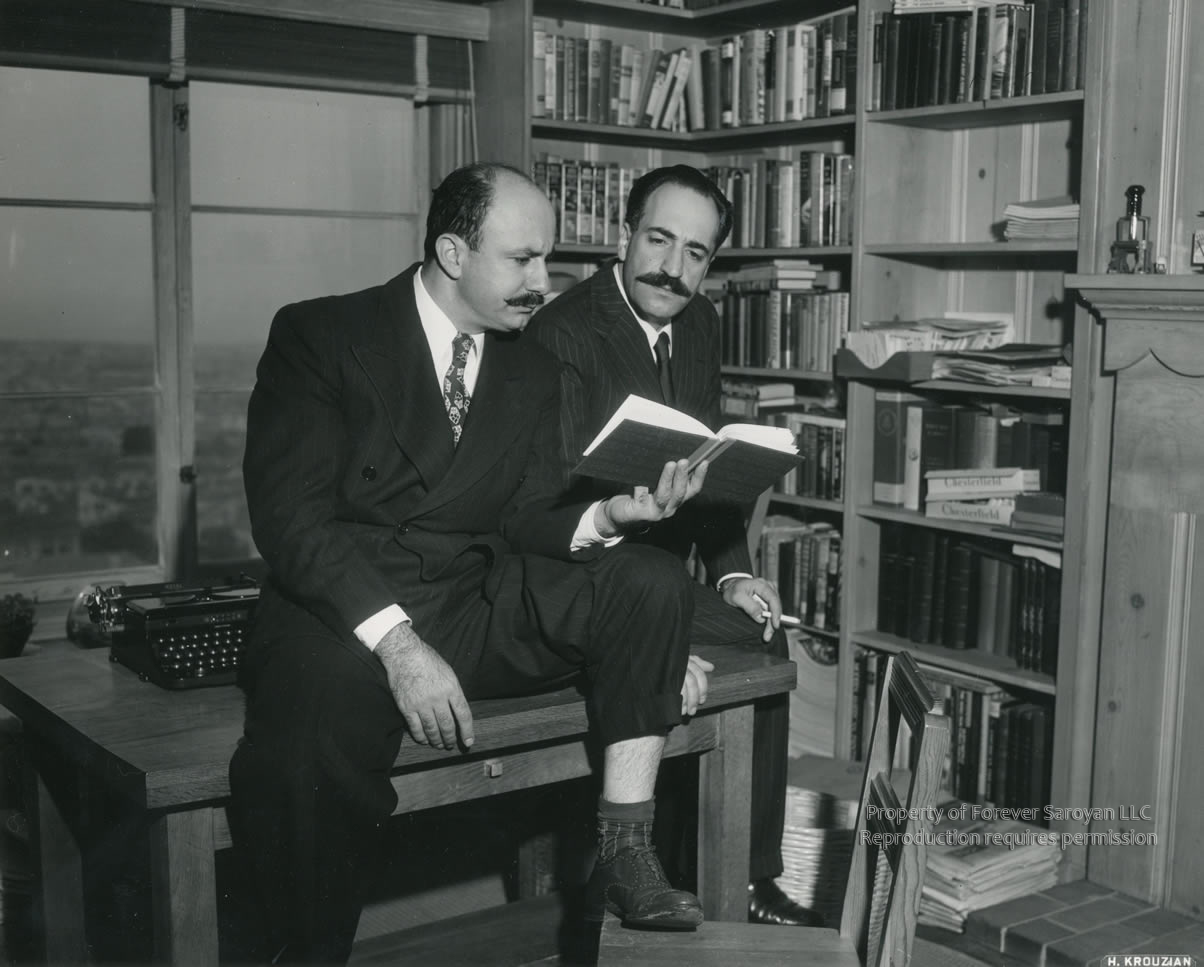 Getting published by a large publisher like Random House or Doubleday is usually a dream for writers. Mass production can lead to a spot on the bestseller lists, which can lead to fame and fortune. But what about the self-publishers and small presses? Historically, small presses have been places of prestige. Unlike small publishers, small presses produce limited edition and specialized publications and are sometimes run by only one or two people. Small presses tend to favor creative and experimental efforts to improve the cultural landscape. These businesses have thrived in America (and beyond) for centuries as artisanal institutions. Walt Whitman and Mark Twain, both heavy influencers on Saroyan, favored small presses, for example.1

Saroyan liked to publish through small presses and also self-published his 1936 short story collection, 3 Times 3. Of the small presses, he worked with The Creative Arts Book Company in Berkeley, Black Archer Press, and notably had a long relationship with The Grabhorn Press, the subject of this article.

The Grabhorn Press was established in San Francisco in the early 1920s by Edwin and Robert Grabhorn. Later, Edwin’s wife Marjorie and Robert’s wife Jane joined the team. The press was known for its use of hand-set type, handmade paper and binding, and elegant design. Later, Jane ran imprint presses Jumbo Press and Colt Press. In 1965, Edwin retired and Robert partnered with Andrew Hoyem to create Grabhorn-Hoyem Press. In 1974, Hoyem created Arion Press and in 2000 established The Grabhorn Institute, a nonprofit honoring the Grabhorns.2 Both Arion Press and the Grabhorn Institute operate today in The Presidio in San Francisco, under new ownership. 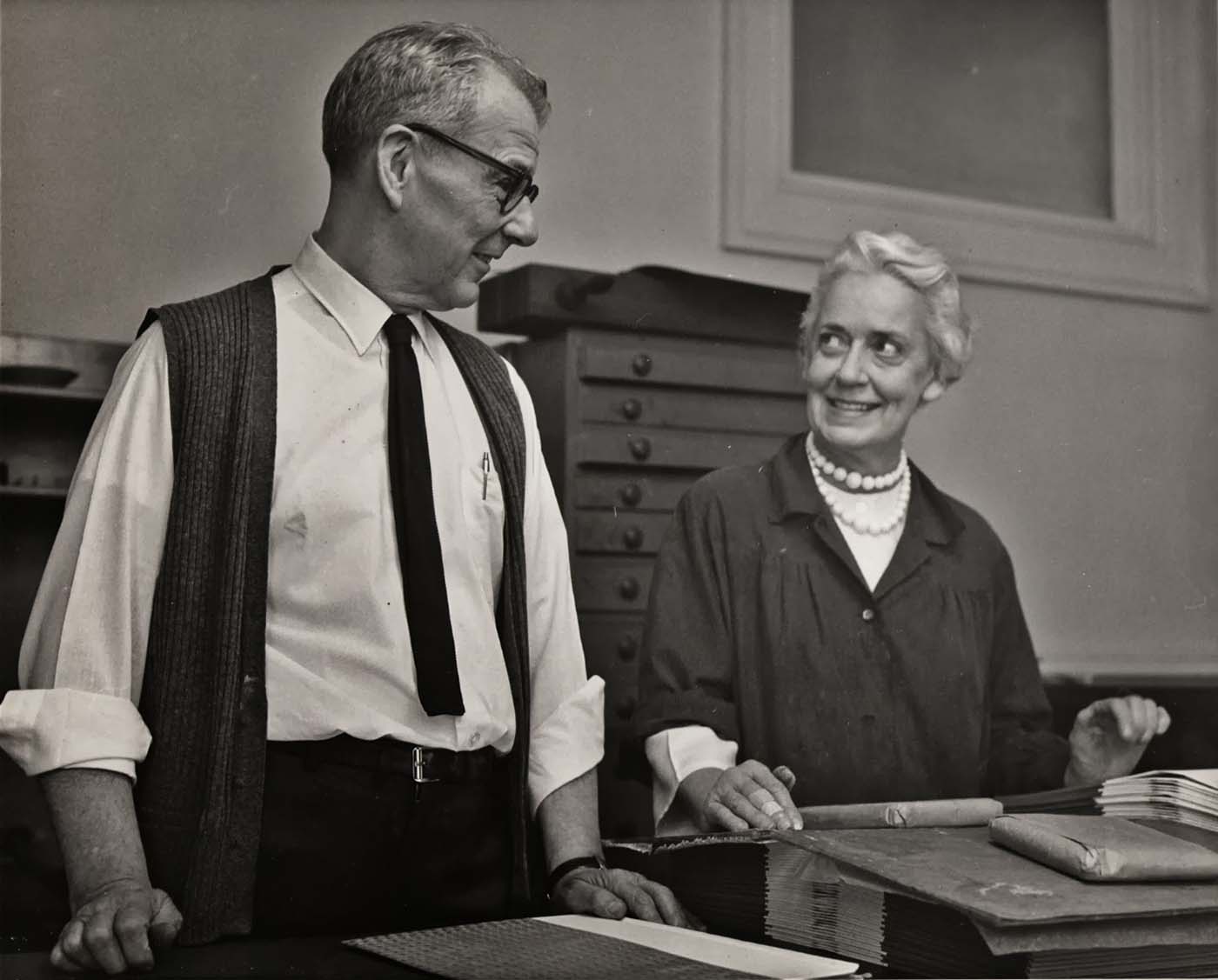 Saroyan printed several books with Grabhorn Press, building a playful friendship and professional partnership with Jane Grabhorn. Their delightful correspondences can be found in the William Saroyan Papers, 1926-1981 collection at the Stanford University Special Collections. Their collaborations include A Christmas Psalm 1935 (1935), Farewell Speech of King Edward The Eighth Broadcast from Windsor Castle the Tenth Day of December, MCMXXXVI (printed by Grabhorn, published by Ransohoffs, 1938) and Hilltop Russians in San Francisco (1941). 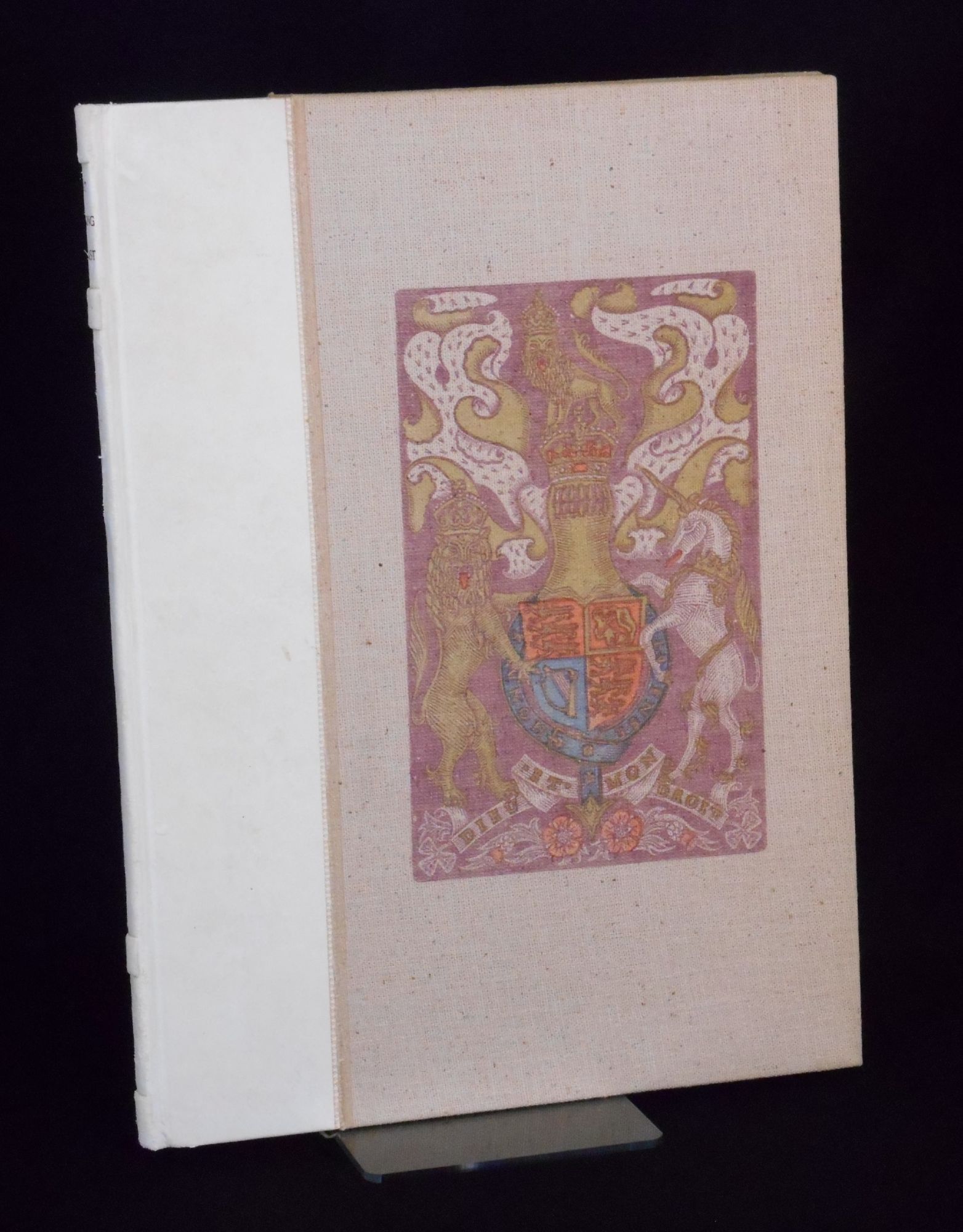 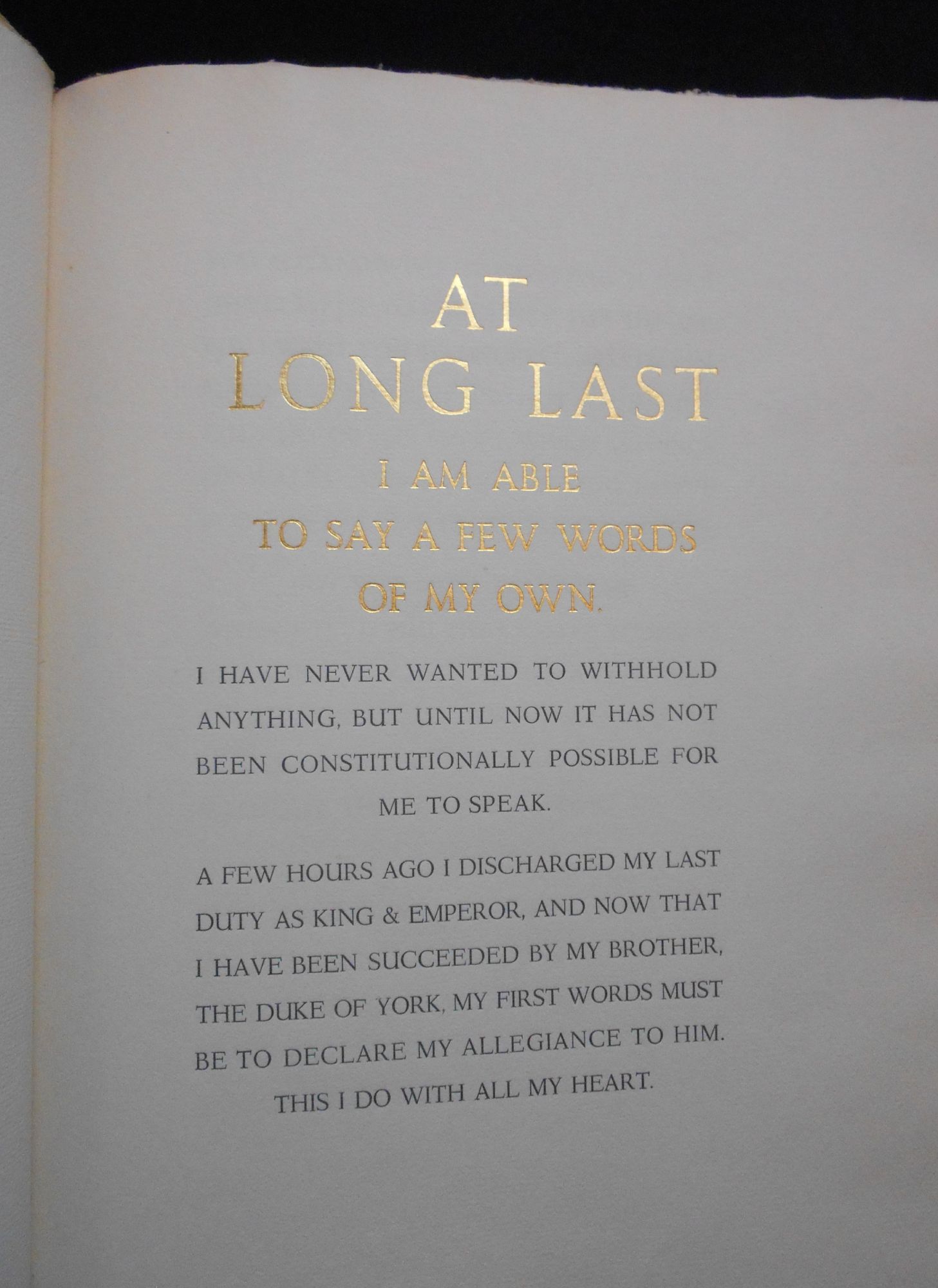 Cover and first page of Farewell Speech of King Edward The Eighth Broadcast from Windsor Castle the Tenth Day of December, MCMXXXVI (printed by Grabhorn, published by Ransohoffs, 1938)

To get a sense of their friendship, we present three letters between Jane and William in 1963 (edited for length, copyright Stanford University Libraries):

In the meantime, the photographs arrived, carefully bent, according to your instructions. And we thank you.

Well, anyway, also I broke two ribs falling against a wall can opener. You think that’s easy, you got another thing coming. I mean it’s relatively easy if you discount damage to the can opener; to do it and leave the can opener absolutely intact, is a major feat of acrobatic skill.

I also have a disease which I believe would be called in olden days the Seven Years Itch. Oh this is troublesome beyond words, and humiliating. I feel like an unclean fugitive as I flit from doorway to doorway, scratching and hoping no one is looking.

Yours of the undated instant saying please send money comes as an astonishment since it is well-known that money isn’t everything if in fact in the final analysis it is anything by far. And clickety-clack, although surely Latin, is obviously used in another sense, perhaps meaning why am I fat or what is the moon? Jane, you have simply got to stop stumbling upon can openers, but never, never give up the itch, one has so few friends.

Love, and love to all of you: Bill”

“It’s lovely hearing from you and I have pinned your letters and the picture of you and me holding hands on my mirror next to the prom-dance cards, the colt drawn by Henry Miller and my Communist Party membership certificate dated 1930. (They never renewed it; claimed I wouldn’t stay in my cell like a good girl should.)”

At this point they had known each other for almost 30 years. Though I haven’t included it here, their letter content alternated between professional discussion and friendly joking, moving seamlessly between the two. It’s clear they had built a strong relationship over the decades.

The friendship between the Grabhorns and William is a bright star in the history of printer-artist relations. This is part of the reason that Forever Saroyan partnered with The Grabhorn Institute to host our exhibit: The World of William Saroyan. Though the exhibit was originally scheduled for April 2020 and was delayed due to the spread of coronavirus, we intend to reschedule and once again join Saroyan to Grabhorn, continuing this legacy of friendship.

The following are images of Grabhorn originals and their reprints:

In 2015, Arion Press reprinted A Christmas Psalm 1935 for Forever Saroyan 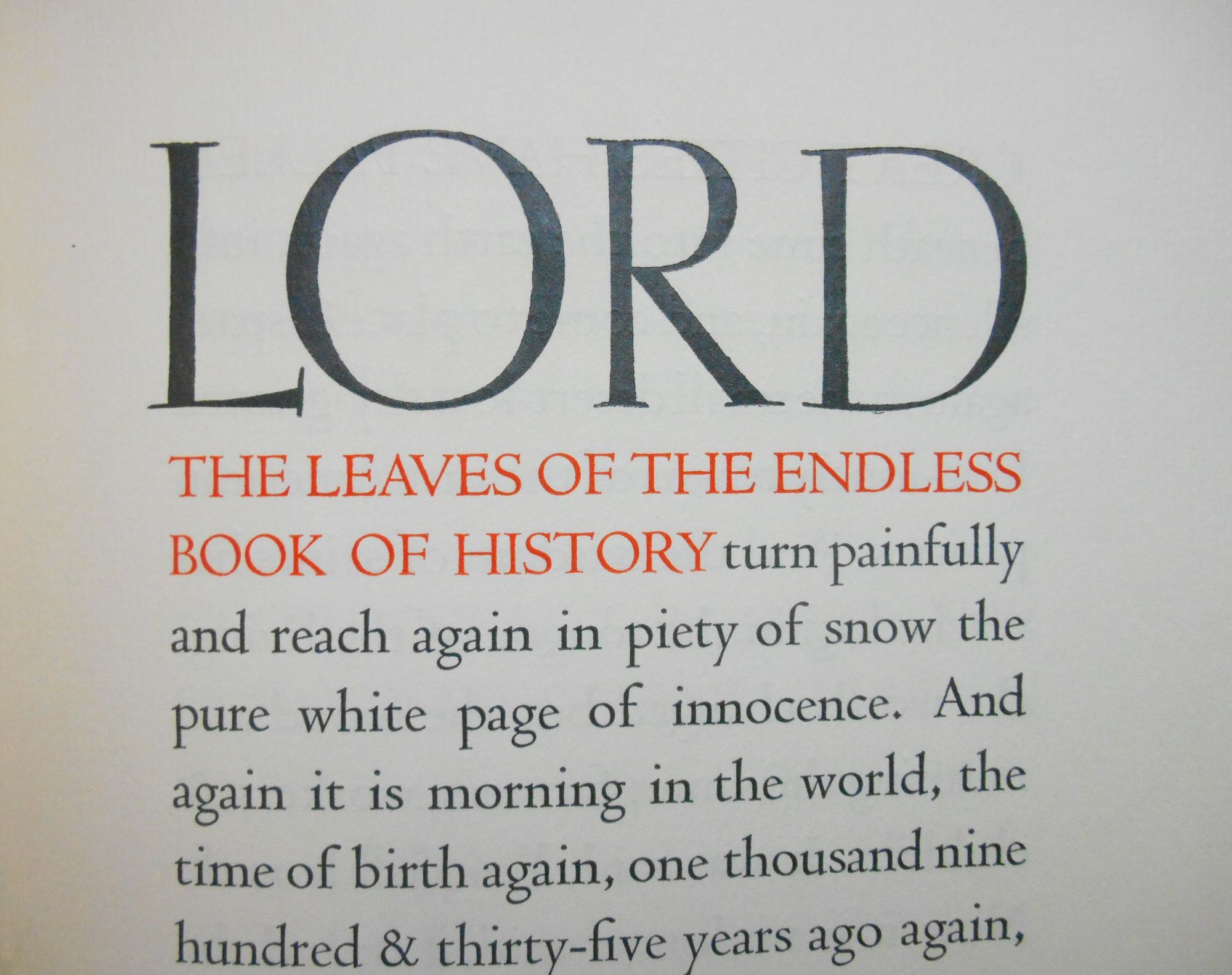 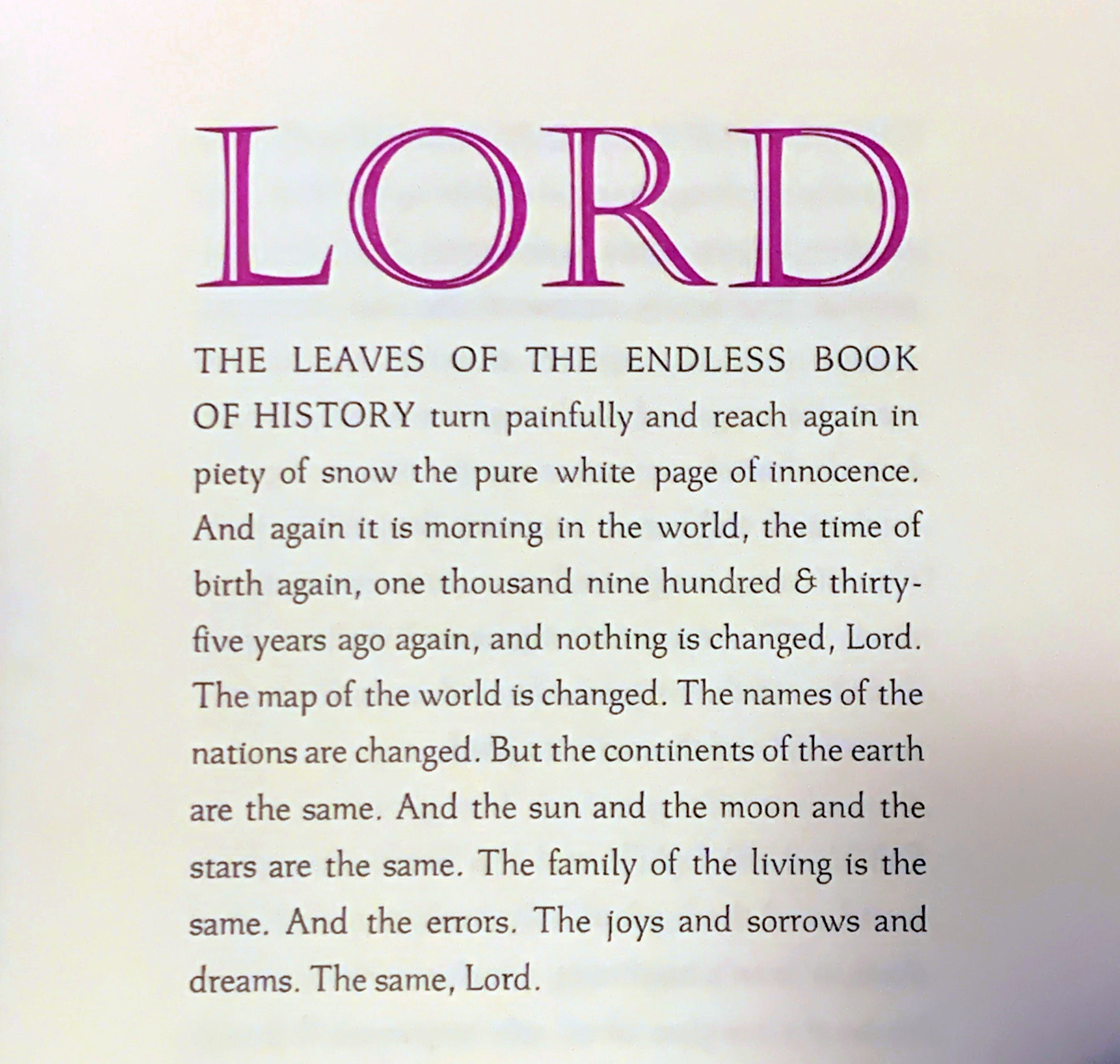 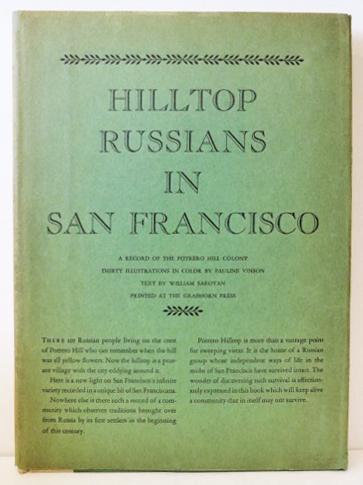 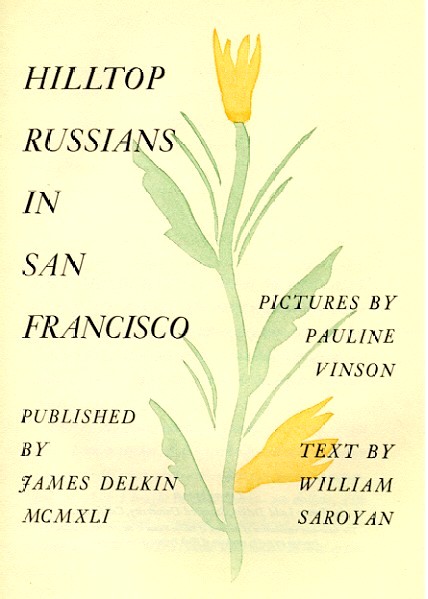 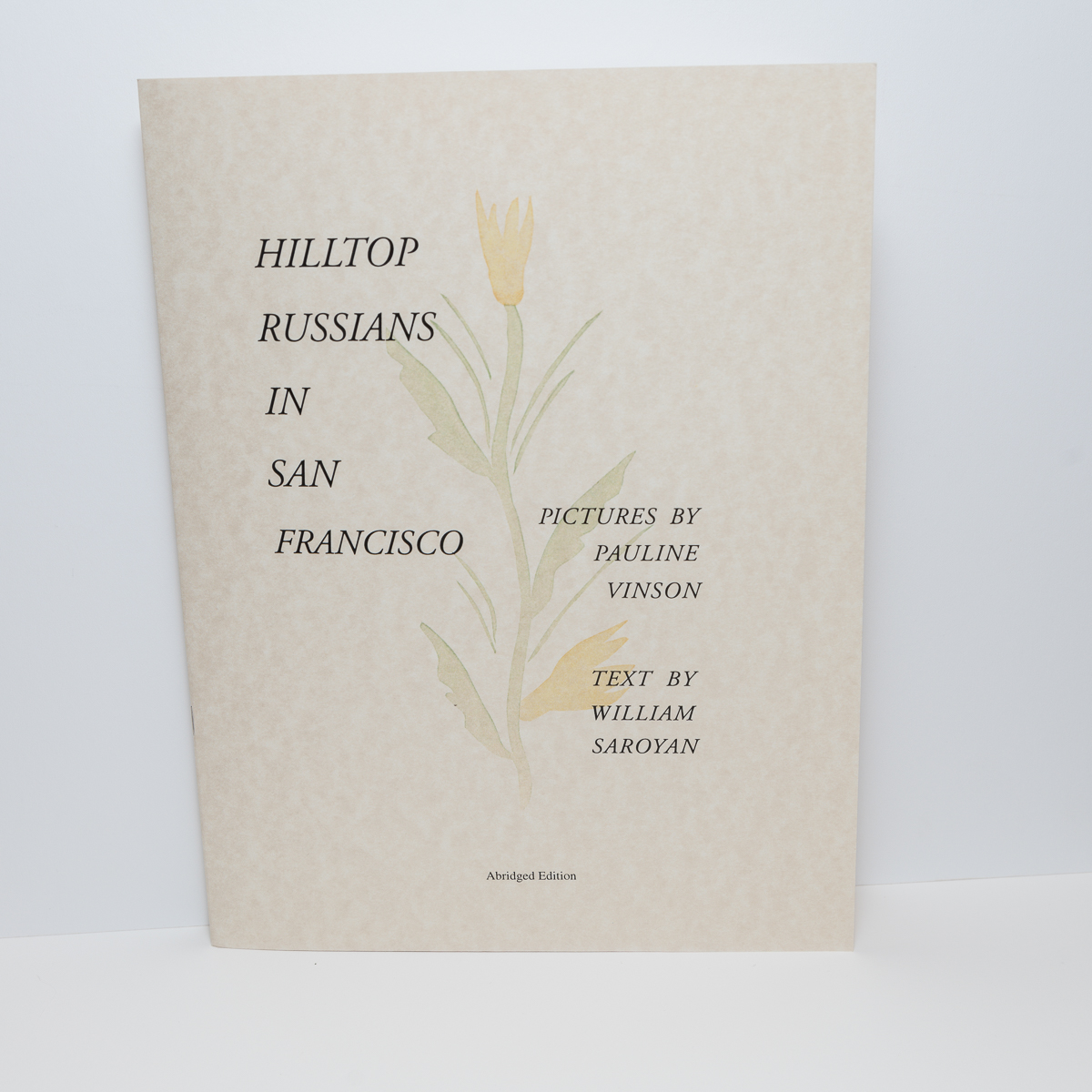 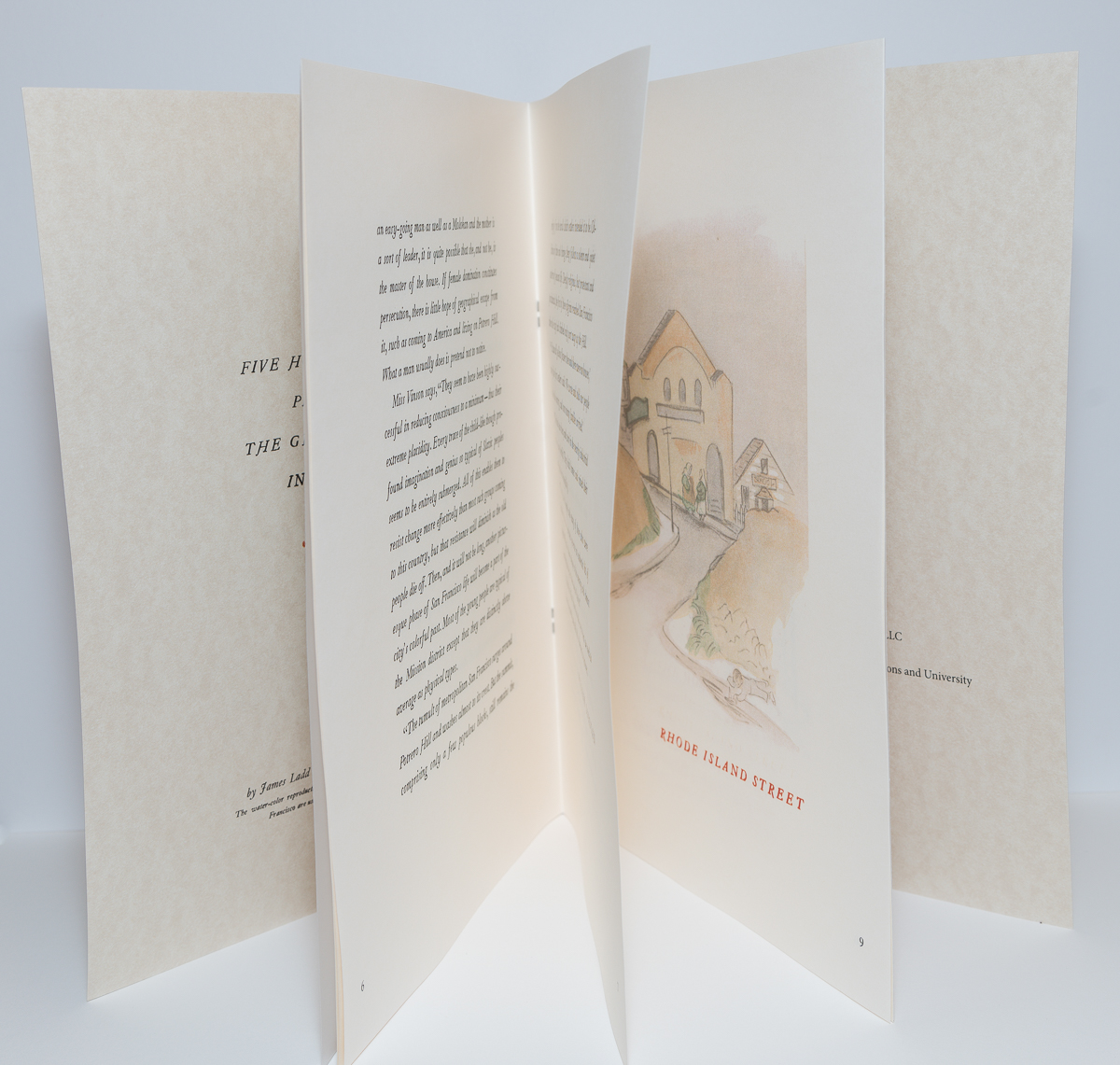 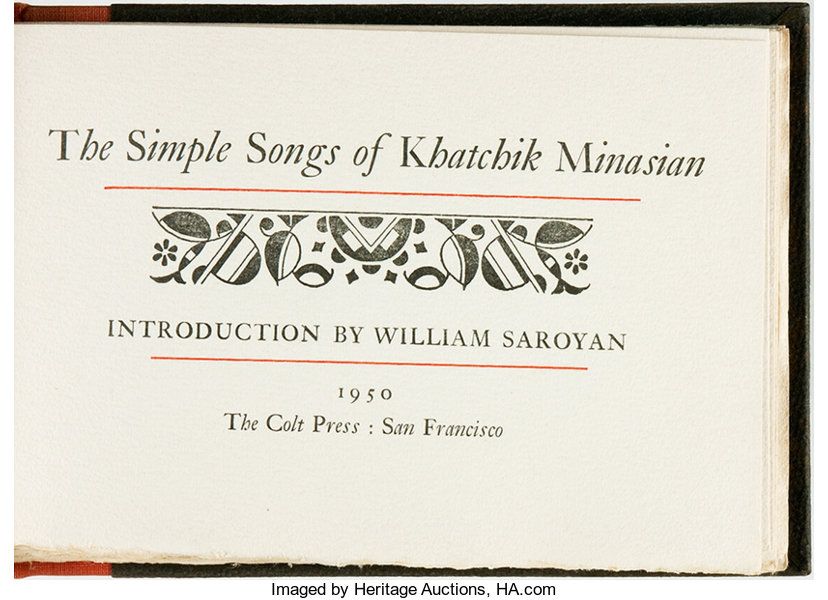 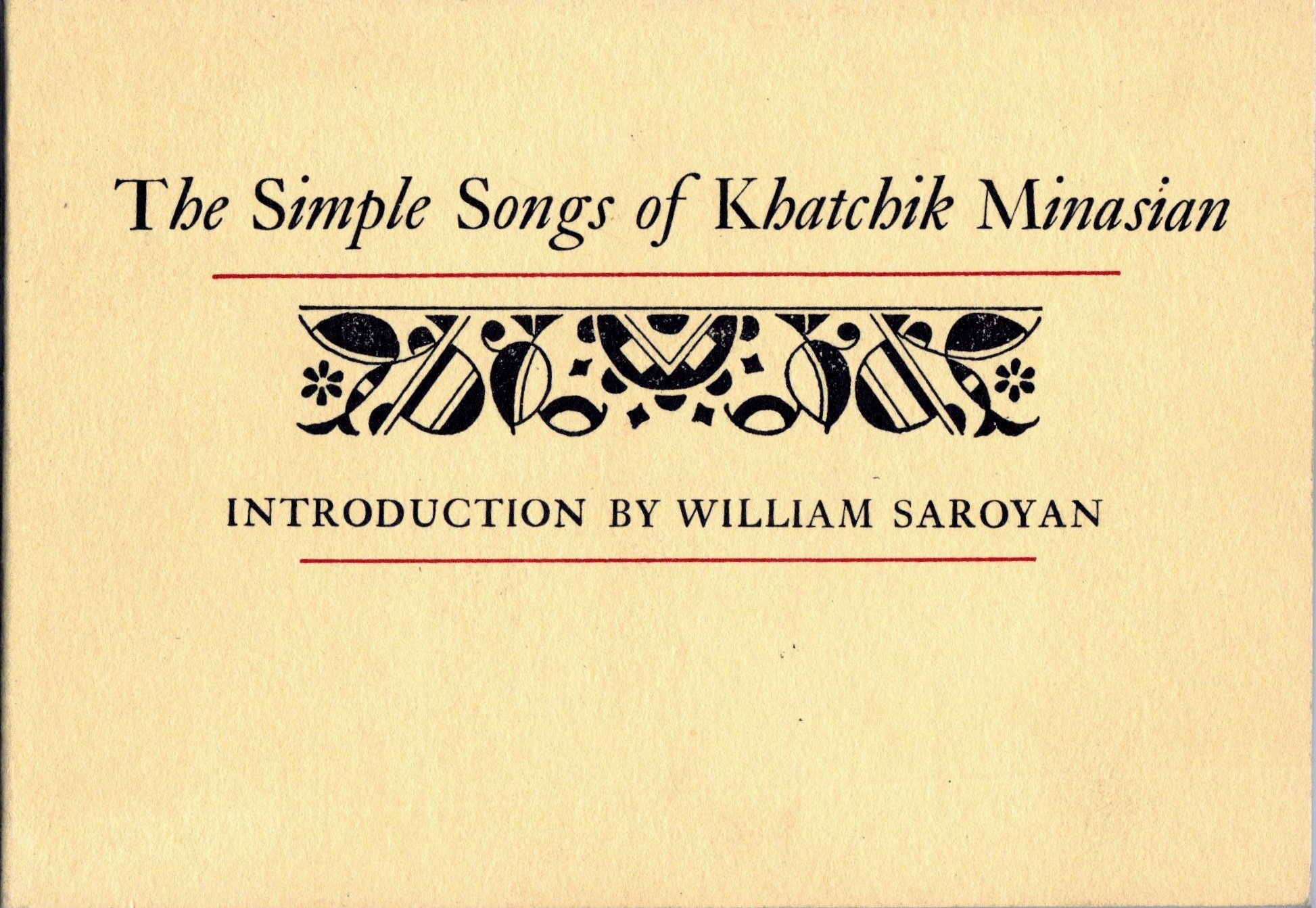