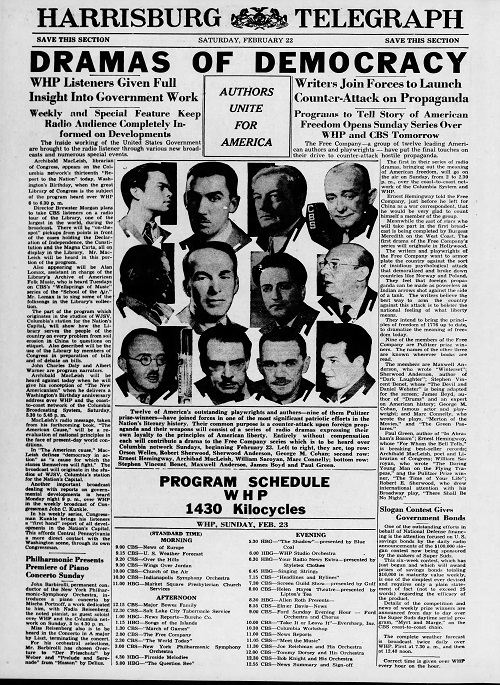 In early 1941, it was obvious that the war raging in Europe was going to boil over and become the second World War. Most acknowledged the United States was not going to be able to remain apart from the action, though isolationist sentiment that had held much of the country since the end of The Great War in 1918 meant that large factions in the United States did not want us involved. There was a general understanding, to a degree, of what was actually going on in Germany and Manchuria, at least enough to make us aware that there were atrocities happening, even if we could not yet name them. As is often the case, a number of artists and writers understood what was going on in the world in a completely different way than was being presented. They were concerned that Americans might not remember what their country meant, and the potential danger of that when it would come time for Americans to take up arms and enter the fray.

The writer James Boyd thought that this would be a good project to tackle with the outstanding amount of literary talent that was bubbling up with the opening of new publishing and presentation opportunities. A veteran of World War I, Boyd was widely regarded as a fine writer of historical fiction. His novels Drums and Bitter Creek were lauded for their historical accuracy and inclusion of modernist literary technique and theory. A gathering of writers in Washington in fall 1940 inspired Boyd to consider the role writers might play in bringing about thought for the role and meaning of America, and these interactions brought about a plan for a project.

“It occurred to some of us who talked together in Washington and other places that in this state of affairs,” Boyd noted, “there might be a chance for the writers of America to perform a function. Not to exhort, still less to prescribe, but by the power of the word to remind, no more than that, our people of their possessions.”

Looking at the landscape at the time, there were a few potential forms the project could take, with film and live theatre both being considered, but it was ultimately radio that was chosen, perhaps because it was the most direct and personal of delivery methods. Boyd set out to gather some of the brightest lights in the theatrical and literary world. Boyd’s reach was impressive, and he quickly began to gather other writers.

“With this much of the scheme in mind I talked with Robert Sherwood and later with Elmer Rice and with William Saroyan,” Boyd said.

With that team in place, they approached CBS about potentially airing the project. They were skeptical.

“In principle they were responsive but dubious of the outcome.” Boyd said, “They spoke of an anonymous lady who had once promised a constellation of authors who had not materialized. We said that we were not an anonymous lady.” 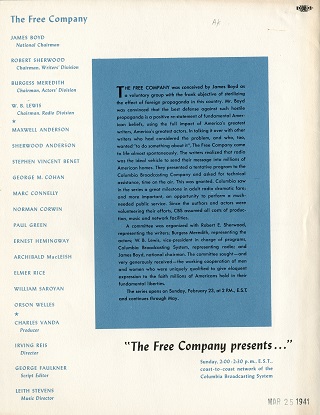 The group left with a promise of airtime on the Columbia Broadcasting Network, and Boyd set out to gather more names. He approached only the most important people working in American letters at the time. Along with Saroyan, Rice, and Sherwood, Boyd brought Sherwood Anderson (novelist and well-known trade union supporter), Archibald MacLeish (three-time Purlitzer winner and then Librarian of Congress), Marc Connelly (Algonquin Round Table member and Pulitzer winner), Maxwell Anderson (playwright and screenwriter), Ernest Hemingway (best-selling prose author), John Steinbeck (best-selling novelist and short story writer), George M. Cohan (Legendary Broadway composer and performer), Paul Green (Pulitzer prize-winning playwright), Stephen Vincent Benet (Pulitzer and O’Henry Award winner), and perhaps most interestingly, Orson Wells, then one of the hottest properties in New York, having not only directed several hit Broadway shows, but also the radio program Mercury Theater on the Air. Welles and Saroyan were arguably the two biggest young bucks on Broadway!

That fact that such a cadre of talent could be put together is amazing when you look at the amount of work each of them were up to at the time. The introduction to The Free Company Presents notes - “But we can say the attitude of most of the writers was heartening. Some are not well, some are poor, all are busy. The demand for a piece of unpaid work in a medium unfamiliar to many of them was a serious one. They took it seriously.”

Once the writing side was settled, it became imperative to secure top-notch acting talent. The group knew they would have to work with well-known radio personalities if they were going to bring mass attention to such an admittedly unique project.

“Once the scripts began to come in we had to meet the problem of casting.” Noted Boyd, “It was necessary to get permission from the Screen Actor’s Guild and the American Federation of Radio Artists for the stars to appear. We got it, and encouraging words besides.”

The project was being guided not only by Boyd, but by a volunteer committee consisting of Robert Sherwood representing the writers, W.B. Lewis, then the Vice-President for CBS Radio, to represent radio, and actor Burgess Merideth. Merideth, at the time was best known for his work on Broadway, as well as film appearances, and it gave the project a recognizable name to drive not only the appeal to an audience, but to appeal to actors to come on-board an unpaid project.

Boyd and company were working on the important behind-the-scene aspects, but also on bringing attention to the project publicly. On January 26th, 1941, articles about the project began to pop up in papers around the US, despite the fact that the entire group had yet to be finalized! The key to the announcement was not only to bring forth the list of contributors, but to hammer home the idea of what the project was actually being created for.

The January 26th, 1941 edition of the Capital Times carried coverage of Boyd’s announcement – “Members of the company are preparing to present the bases of our freedom, not as paid propaganda, but as voluntary statements of faith by a group of Americans qualified to give them eloquent expression” 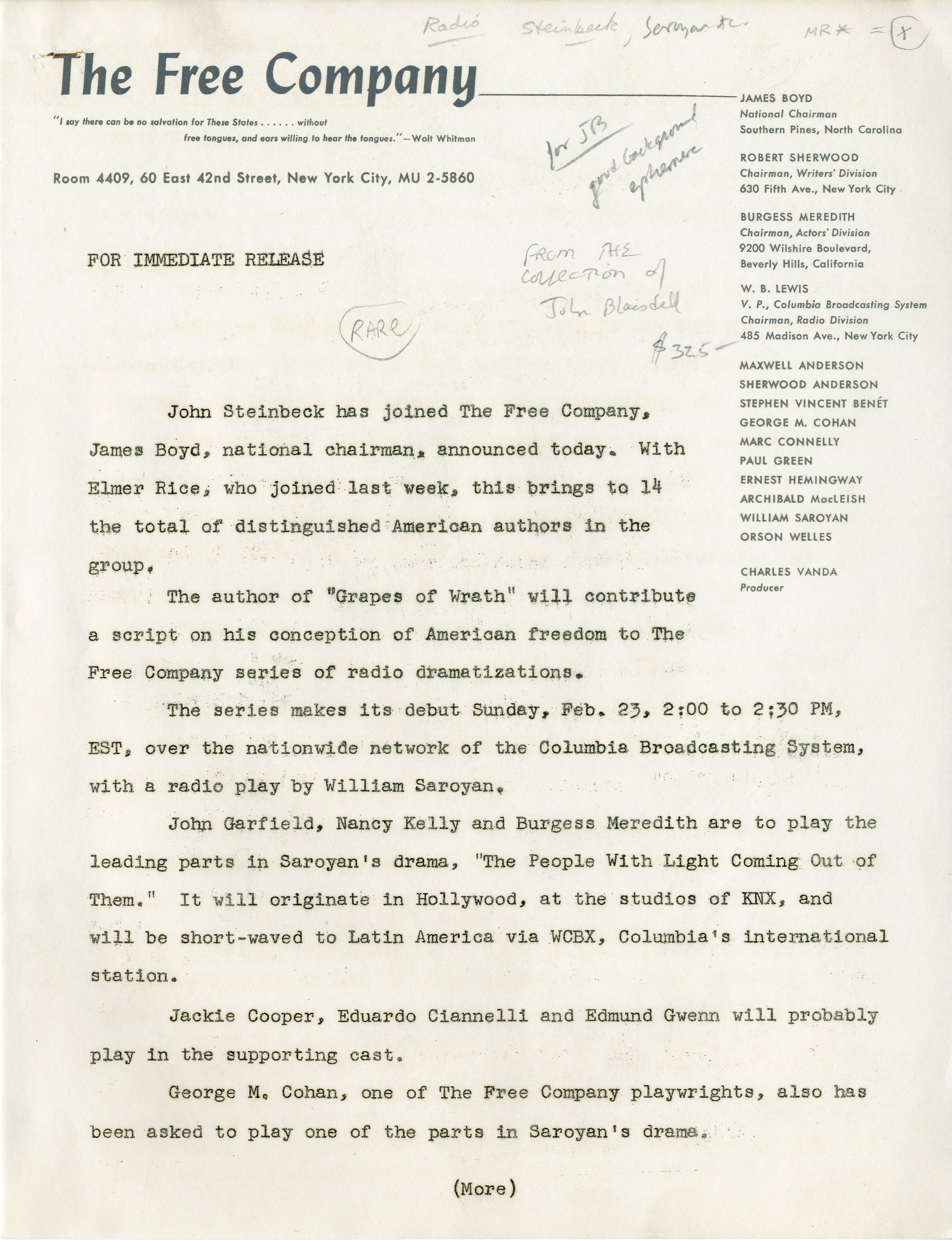 Boyd later adding – “The effectiveness of hostile propaganda, so tragically demonstrated in various European countries, is greater here than generally realized.” And “So far, most effort in this country has been directed to attacks on that propaganda. But the best defense would be positive restatement in moving terms of our own beliefs. They will be presented, not as abstractions, but as a living spectacle made actual; to the mind by color, drama, and passion.”

The project moved forward through 1941, though not completely without hitch. Elmer Rice, suffering from exhaustion, could not participate, and Hemingway was unable to return from China in time to work on the project, while George M. Cohan found himself backed up with other musical concerns and was unable to complete his own play, but did appear as an actor in an episode. Steinbeck, as was often the case, was backed up on his own projects. Sadly, Sherwood Anderson passed away before he could complete his entry, though Boyd, and perhaps others, stepped up to complete his entry.

Still, the project was well-marketed, as if it were a new regular, much-hyped program. The Department of Justice and the Solicitor General of the United States were both fully on-board, and first lady Eleanor Roosevelt even mentioned it in her My Day column run in papers across the United States.

The Free Company debuted on February 23rd, 1941 with William Saroyan’s The People With Light Coming Out of Them. The story opened with an exchange between William Saroyan and host Burgess Merideth, set-up to seem as if Merideth was asking Saroyan to deliver a story on the spot. The story Saroyan tells is a slice-of-life piece, showing the interactions of people of different classes, ethnicities, and races. The advance notices of the program were enthusiastic. The St. Louis Globe-Democrat said “In Saroyanesque-manner, the play achieves tremendous impact through simplicity of speech by “just ordinary folks” who reveal through their neighborly small talk what it means to enjoy freedom.”

The program was very well-received, and the performances by John Garfield, well-loved film star and Academy Award nominee, and Edmund Gwenn, whose portrayal of Kris Kringle in Miracle on 34th Street would forever influence the vision of Santa Claus in American culture.

The series was a fair success, and after the 11 initial episodes aired, many called for more. The first sign of its success was how listeners by the thousands were writing in to the stations to get the small printed booklets of the episodes. These were sold for 10 cents, which barely covered printing. These booklets would be compiled into a single volume later in 1941. There was great hope that the project would get another season, partly so those who had not had a chance to write their pieces could do so, and partly because th 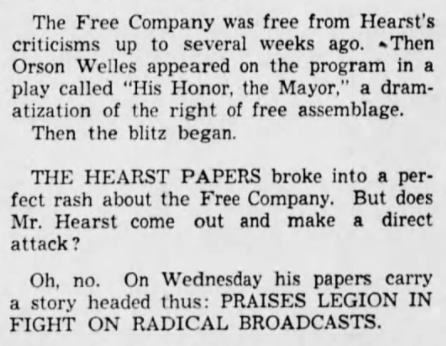 ose that had appeared were of such high quality.

That’s not to say that there was not some controversy in the project. Maxwell Anderson’s piece, Miracle on the Danube, has been seen as a shot across the bow at the Nazi regime, perhaps intending to stoke the fires against the Germans so that in our inevitable entry to the second World War, Americans would be primed for hating the Nazis. In fact, several of the plays, both at the time and in the decades since, have been referred to as ‘propaganda,’ though part of the reason for that might have more to do with external politics.

Orson Welles, usually pointed to as one of the most fervent followers of The Free Company agenda, was nearing the end of production on Citizen Kane, his fictionalized harsh, though masterful, indictment on the life and times of William Randolph Hearst. Hearst, who controlled a great number of American papers, had taken to swiping at Welles wherever possible. After Welles’ His Honor the Mayor appeared, Hearst’s papers went on the offensive. In a story ostensibly about a speech at a Los Angeles American Legion luncheon, the paper makes sure to mention “the rising storm of protests of groups from coast to coast against the subversive propaganda seen in the Free Company series of radio broadcasts is expected to be coordinated into a unified national program May 1 and 2 where American Legion leaders gather in Indianapolis.”

It's most likely a second season of The Free Company did not happen because of the entry of the US into World War II following Pearl Harbor in December, 1941. Several of those involved, including Saroyan, would serve the war effort in various ways, including serving in the First Motion Picture Unit, writing and acting in films meant for audiences at home, as well as for training and entertainment for those on the front lines. Sadly, several members passed away as the war raged on, including James Boyd, who passed in 1944.

The Free Company is one of the first writer-led projects to realise the power of radio as a means to convey political, social, and creative messages with the goal of promoting American values. The names who participated, and the quality of the material produced, makes the Free Company a landmark in American mass media history.

The Digital Deli Too with the Credits and Other Info

Material pertaining to His Honor The Mayor