Welcome back to the Place of Places, a chapter-by-chapter analysis of William Saroyan’s 1972 memoir, Places Where I’ve Done Time. Today we take out a lease at 1707-A Divisadero Street, San Francisco, 1929.

This one takes place at Divisadero only slightly. Really, it’s about the small but important places he could remember from his early years. He begins, “The places that I have experienced and remember from time to time but mainly forget are here and there, although quite a few are gone” (Places Where I’ve Done Time). He recalls the original address of the Fred Finch Orphanage before the street was renamed; he recalls the Sequoia School, the first school he attended, which was in Oakland; he recalls the small grocery store next to the school with the benevolent grocer; and then the room on Laguna Street in San Francisco where he was allowed to leave the orphanage and stay with his mother for a short time; and then he lands at Divisadero Street, where he briefly lived with his mother and siblings when he returned from his New York trip in 1929.

Because this chapter covers quite a number of places, we can break them down but also put them in one emotional place for Saroyan. These are some of the places where he felt a bit of security in his very chaotic early years.

He starts with the Fred Finch Orphanage, which we have established was a significant place was for him. Though he hated it, its strict rules were predictable, its employees firm but not abusive. In his later years, he would even come to appreciate it in some ways. Though he pushed the envelope many times as a child, testing the boundaries of rules and their enforcement, the Fred Finch Orphanage kept a tight ship that tried to teach the children self-discipline and resilience. It was the first home address he could remember, for better or worse. The attachment was strong because there was no alternative. Given his mother Takoohi’s options, she probably considered it the most stable and secure place to put her children. 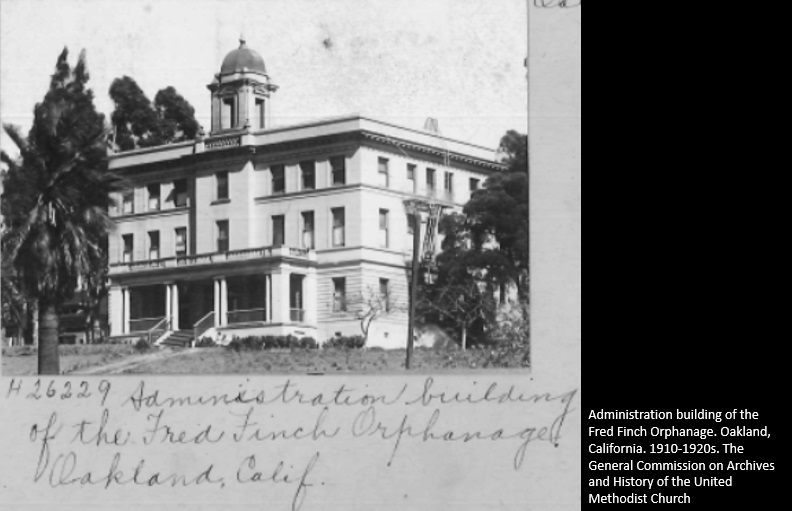 Saroyan remembers the orphanage at 3361 Peralta Way. It was “the official address of the Fred Finch Orphanage in Oakland, or so I have come to believe. Whatever the name of the street was, it was changed to Coolidge, obviously during his administration as President” (Places Where I’ve Done Time). The orphanage was at 3670 Peralta Avenue, and around 1928 the street was renamed Coolidge, likely for the president who had just reached the end of his service. In the early 1900s, many cities in California were absorbing smaller towns and consolidating them into urban neighborhoods. Oakland was growing and absorbing many hamlets immediately around it, having to rename some streets to avoid duplication. It’s not clear if this was the reason for the name change, but these years saw expansive growth and change in California.

Near the orphanage was the local public elementary school, the Sequoia School. He explains that the administrators made a great show of planting a redwood tree in front of the school and describing how huge it would get as a type of affirmation or motivation for the students. Redwoods aren’t the same as giant sequoias, but they are related, and their Latin name is Sequoia sempervirens. They are native to northern California, but they don’t just grow anywhere. They typically need coastal or valley fog to flourish. Oakland was so named because it was a healthy home for oaks, not redwoods. So, when Saroyan and his brother Henry anonymously return to the school years later to take a look around, the tree is long gone, having not survived. This is meaningful in its own way – the great redwood failed to thrive while the Saroyans were able to. Saroyan didn’t have to much to say about the Sequoia School in his writings, but he does note that the orphanage provided lunches to its wards at the school. And in this way, it was another secure, reliable place. When he moved to Fresno, he had much more negativity towards schools, teachers, and administrators. The Sequoia School was sort of an extension of the orphanage. 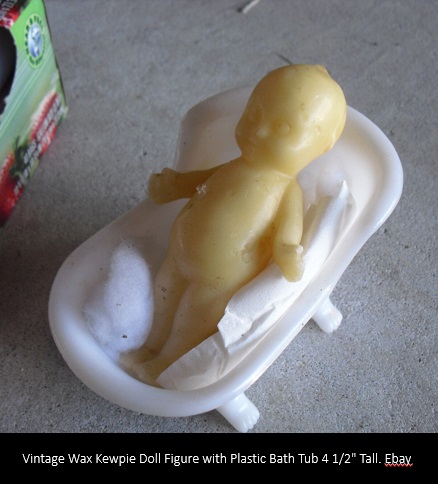 After that, he remembers the grocery store next to the elementary school. The grocer would give him and his friends a licorice strap, a jawbreaker, a wax Kewpie, and “many other penny marvels” (Places Where I’ve Done Time). Before the 1920s, people generally didn’t select their own items at a grocery store. When the first self-serve grocery store, Piggly Wiggly, opened in 1916, it was advertised as an “adventure.” When Saroyan was a boy, people went to the counter, made their grocery request, and the clerk selected the items, many of which were behind the counter. In this way, people got to know their clerks or grocers and even more so vice versa. This benevolent grocer persona would appear in Saroyan’s scripts and stories later in his life. The grocer in Oakland was particularly memorable, and of course the kindness of an adult would have had outsized importance to orphans. “But I have never been able to forget this good grocer” (Places Where I’ve Done Time), he writes. This wasn’t a place that shooed the children away or worried about theft. Instead, it was a safe place to go hang out as kids do, and the adult in the room gave them free items rather than threats. He names his friends Sammy Isaacs and Teddy Dolan, and with those names, whether real or fake, Saroyan is telling us they were Jewish, Irish, and Armenian kids, all of whom were from immigrant groups that were maligned by existing Americans. Again, this grocer’s kindness would differ from the reception he and his Armenian friends received in Fresno later.

Then he remembers the furnished room on Laguna Street, where he stayed with his mother for a short time while she served a wealthy family in San Francisco. He was a latch-key kid and liked to ride the back step of an ice wagon until his mother pulled him off and walloped him. He says the orphanage insisted he return, but it’s more likely that his mother couldn’t manage a small, wild boy in San Francisco, and sent him back to be with his siblings. He tells us going back to the orphanage was “all right, it was no big deal, although I went right on hating the place” (Places Where I’ve Done Time). In this book and others, he makes much of how strong and resilient he had to be as a little boy –  no tears. The Saroyans had been through a lot, but it’s also just as likely that young Willie was re-traumatized each time he had to leave his mother. Though he had to change schools and was apart from his siblings and lacked the order of the orphanage, being with his mother as a young boy would have been the safest, most secure place for him to be emotionally. His wild nature and her focus on earning enough to support the family made their reconciliation on Laguna Street brief, but probably a much-needed salve for the young boy.

Finally, he remembers 1707-A Divisadero. It was just across the street from where the family had lived on Sutter Street, which we covered in Chapter 3. Apparently, his mother had gotten tired of climbing the flights of stairs at Sutter Street. Both of these apartments were only blocks from Bill McDevitt’s used and rare book shop and going there was “part of the whole business of being connected to paper and print, words and punctuation marks, language and books” (Sons Come and Go, Mothers Hang in Forever).

After he became ill and returned to San Francisco from New York in 1929, he was back with his family. “I worked whenever there was a job, and for $10 I bought an enormous old-fashioned baby-grand piano – sometimes I put a blanket on top of it and stretched out up there for a nap” (Places Where I’ve Done Time). His mother was probably very annoyed at this purchase, as she had been when he bought his precious Victor phonograph and a typewriter when he was a child. Later, in the house on 15th Ave, he would have a player-piano. Saroyan was never formally trained as a musician, but he loved music and instruments. He loved to be surrounded by them even if the most use they could get was as very stiff bedding. He would incorporate music into most of his plays and used his natural rhythm in his writing. Eventually he wrote lyrics, including those for the 1951 hit Rosemary Clooney song, “Come on-a My House” with his cousin Ross.

In Obituaries, he writes, “I had to have music, that is to say, and I was interested in all kinds of it. The music of the blacks in those days was called ‘race music,’ and the whites hadn't yet discovered it. I had listened to gospel, and slave, and sorrow, and jubilation music sung and played by blacks, because it was also my music, as of course so was Paul de Greef's playing of Edvard Grieg's Concerto, which became my morning music—shaving, having black coffee, and going out by the nickel streetcar ride either to a job or to look for a job. It was a young time, it was a joyous time, it was a sorrowful time, it was a great time, this sort of thing didn't begin with Charles Dickens in A Tale of Two Cities: everybody has experienced it and put it into spoken or written words, but most of all it was a muscular time, a time of holding out for the best, a time of believing for instance that the one (and only) right girl would be found by me, and she in turn would be looking for me, and we would know it simultaneously, and there we would be. All of this was in all of the music I listened to, but it really showed up very meaningfully in the song ‘What Does It Matter?" sung by Irving Kaufman, and I played it so much that everybody in my family, and everybody visiting the various flats where we lived, also came to know the music, if not the words, and to hum the music. The music is blue—not black, not white, not the blues of the blacks, nor the blues of the whites, but the blue of youth, and of something that has come to be identified as romanticism when it appears in writing.”

New York had been jarring and exciting, but going back to the family home on Divisadero was a place where he could continue his inner journey while relying on others for food and money, to some extent. While he did odd jobs, the inconsistency of which annoyed his family members, their unconditional love allowed him to live there and pursue his writing so that he could get to the pedestal of 1934. While he fought with his family at times, they were a safe port in a storm and Divisadero allowed him to take the time to decompress his experience in New York and turn it into something meaningful and substantial. Though, his greatness would truly materialize on Carl Street.

This chapter condenses a number of small but influential scenes for Saroyan. Though this book alternates between miserable places and happy places, there are some that could have been forgettable had they not all contributed to the puzzle of his eventual success as a writer. And for that he pays his homage here. 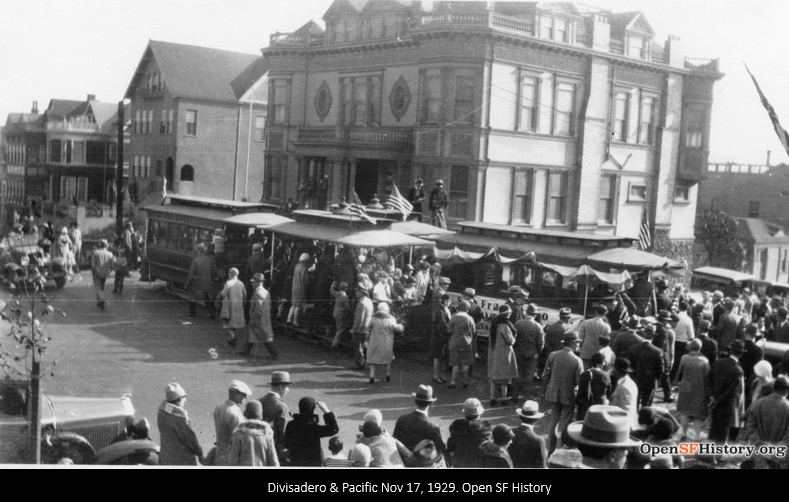