Welcome back to the Place of Places, a chapter-by-chapter analysis of William Saroyan’s 1972 memoir, Places Where I’ve Done Time. Today we remember his roots in Bitlis, Fresno, Los Angeles, 1926.

This chapter is more or less about the concept of “home.” What makes a place your home? It’s what this whole book has been grappling with and many of his other memoirs touch on this question, as well. Saroyan was interested in identity, his own and others’. 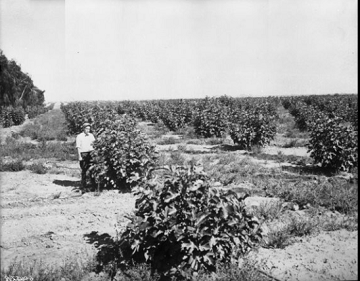 Like many young people, he shunned his hometown for many years, feeling that Fresno was suffocating and limiting. But as he aged, he began to appreciate where he grew up and gained a new perspective on the idea of “belonging.”  He explains, “Places make people. They very definitely do, almost physically. Places procreate. They are part of the human procreation process…There are places that are all business, and places that are all fun and frolic, and still other places that are all light and song and the senses and love” (Places Where I’ve Done Time). As we have seen in previous chapters, Saroyan’s brand of spiritualism had an Eastern flavor to it. And here we might say that Saroyan is talking about the “vibes” of a place. This is particularly useful for an author, as some of the greatest works of literature present their setting as a character in the story. And this is especially true of the writers that Saroyan admired, like Mark Twain, Jack London, George Bernard Shaw, Charles Dickens, and others who made their settings central to their plots and character development. This might have been something that he picked up on very early in his life, as he was reading in the Fresno Public Library as a child.

Let’s address the first place in the name of this chapter, Bitlis. It was the ancestral homeland of Saroyan’s family, but it was engulfed by the Ottomans in the 19th century. Bitlis has a complex history, having been occupied by Muslim Arabs, Armenians, Byzantines, Persians, Mongols, Kurds, Ottomans, Russians, and finally modern Turks. Both sides of Saroyan’s family were from Bitlis. In fact, Armenak and Takoohi had the same last name, though they weren’t related by blood. The Saroyan roots ran deep there and in the whole region around Lake Van. For much of Saroyan’s life, Bitlis was legend, available only in stories from his elders. The reality of Bitlis was immaterial compared to the symbol it represented: the culture of his people and the tribe he could belong to with unconditional love. 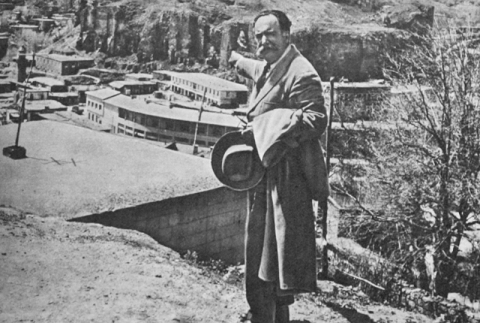 “We are the product of two things well-known and established by everybody. The inherited and the environmental. I am an American by environment. I am an Armenian, that’s who I am. I was born an Armenian. But you put me in California, that’s my home. So somebody told me ‘What does California mean to you?’ I said, to be perfectly honest, it’s my native land. I have a very deep attachment to it. He says ‘As much as to Hayastan?’ Yes, as much as to Hayastan, as much as to Bitlis. In an allegorical rather than sentimental sense, Bitlis is supreme. But this is another dimension of experience. This is almost a dream. This is almost beyond anything that we need. Try to measure in terms of the reasonable, because, remember, Bitlis has become a kind of monument of our loss” (“Candid Conversation with Garig Basmadjian,” William Saroyan: The Man and the Writer Remembered).

“William Saroyan was both enchanted and haunted by the ‘mulberry-scented air of Baghesht’: the splendid famous town of his ancestors. The quest for his familial beginnings in historical Armenia can be seen throughout his oeuvre, and his invocation of Bitlis is often a frantic search for traces of father Armenak…In the play Bitlis, he returns to the birthplace of his family in a final tender effort to reconnect with his actual and imagined past…Places for writers inevitably become imbued with personal, private meanings and become imaginative microcosms: symbolic landscapes upon which the artist's obsessions are enacted. So Faulkner's Mississippi became Yoknapatawpha County and Northern Michigan was mythologized by Hemingway into the ritualized initiatory scene of his powerful fishing story "Big Two-Hearted River." California's Salinas Valley was transformed into John Steinbeck's East of Eden, while Henry Miller's Pacific Coast became Big Sur and the Oranges of Hieronymus Bosch. So too did Saroyan make Fresno and the San Joaquin Valley in My Name Is Aram and The Human Comedy into a sunlit and tragic realm: a microcosm of Armenian immigrant experience.” (“The Mulberry-Scented Air of Bagesht: Saroyan’s Quest for Bitlis,” Calonne)

It is from this symbol that we can approach the rest of this chapter and in fact, his entire body of work. Bitlis is family and dispossession and resilience.

Saroyan uses smells as important metaphors in this chapter. A common literary tool, descriptions of smells can make very visceral connections with readers. He writes, “There were also the magnificent smells in the house in which one did one’s early time: the very walls themselves, the people who lived in the house, and the things they cooked or baked: Armenian bread, for instance, in the three popular forms prepared by the Saroyan family: the round, wafer-thin flat bread, the oval loaf bread only an inch or two thick, and the diamond-shaped little loaves of butter bread.” He goes on to explain that his family grew parsley, mint, basil, onions, bell peppers, tomatoes, cucumbers, and those smells were part of him too. These were the smells of Bitlis in Fresno. 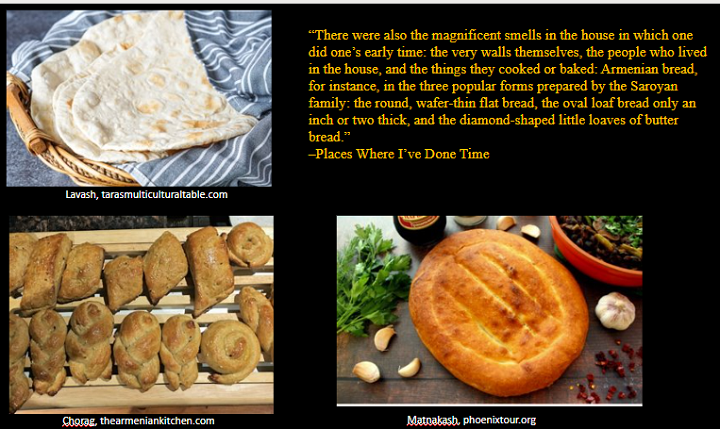 Another topic of interest to Saroyan, especially in his later works of fiction, was assimilation. This is an evergreen subject for immigrants and the question is often - What do we lose when we assimilate so that we can succeed economically? It’s a major theme of the novel Rock Wagram, published in 1951. To Saroyan, the smells of Armenia keep him grounded in his culture when it would have been easy to lose oneself in the so-called American melting pot. This was a feeling that grew more and more powerful as he aged.

Next on the list for this chapter is Fresno, providing both a sense of belonging and rejection, the American immigrant experience in a nutshell. It was too small, too remote, too bigoted. But it also represented family and the legacy of his culture in diaspora. And it was where he was born, which he had an attachment to for better or worse. “After the World, after being Anywhere at all, my place was Fresno, and as far as I am concerned it was the very best possible place for me to be – and for this reason: that’s where I was dropped. The minute we met, that was it. We belonged to each other. Forever. It was a fact. I was born there. I wasn’t born in Bitlis, Marseilles, London, New York, or anywhere else. I was born in Fresno. It was my place. I loved it. I hated it” (Places Where I’ve Done Time).

In this book alone, almost a quarter of the chapters are devoted to Fresno. It certainly had pull on his emotions, and the world was changing rapidly in the years that he lived there – 1916 through 1926. “Fresno had great early appeal for me. It had a fine smell of dust, of the desert, of rocks baking in the sun, of sand with cactus growing out of it, of water flowing in rivers and ditches, of orchards and vineyard set out in great geometric patterns, of leaf and blossom and fruit. It also had all the smells of rot, decay, and ferment: the great heaps of grape pulp and skin at the wineries sent smell all through the town if there was a little wind stirring” (Places Where I’ve Done Time). Perhaps no other artist has so beautifully rendered the hot farmland of the Central Valley, not generally known for its splendor. 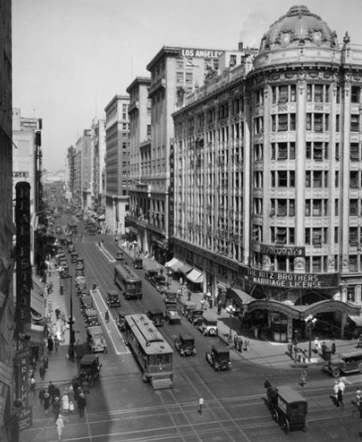 Last on the list in this chapter is Los Angeles. Here he is repeating part of his story from Chapter 59. “After I got out of the National Guard in Los Angeles in August of 1926 I was still half-sick from the sickness I had fought in the furnished room behind the brand new Public Library. Something was wrong. I wasn’t myself. Things were assaulting me from all sides, breaking me up. I wasn’t in one piece.” Uncle Mihran finds him on a corner in LA and takes him to a Greek restaurant where he says, “the food was like the food at home. I ate vegetables with lamb, and that was it –the good food with the good smell brought me back together again. And so did running unexpectedly into a member of my family. Fresno was my place, and my family was my place” (Places Where I’ve Done Time).

Once again, it is the smells of the past that bring him back together and make him feel safe again. And there’s a scientific reason for that – smells move through the olfactory bulb, which has a direct line to the limbic system that contains regions associated with emotion and memory. Similarly, taste moves through the nasal regions as well, so that flavors are actually smells. It is even thought that smell is the most developed sense through about age 10, when sight takes over. Thus, smells from childhood can evoke the most memories and emotions. The flavors of Fresno and family were unsurprisingly very strong, and left a lasting impression on Saroyan.

Saroyan isn’t considered a flowery writer. Instead of using visual descriptions, he leaned heavily on descriptive smells, a more subtle and possibly more evocative form of description. When his mother leaves him at the orphanage, he writes, “She went off, taking with her the smell of mother, and to a man not yet three that's quite a smell. It's made of skin and soap and a little perspiration and a little powder from Woolworth's, but mainly of her, unaccountable, of the pieces broken and not picked up” (Here Comes, There Goes You Know Who). He also describes the orphanage as smelling of lye or strong soap, the smell of an institution (Here Comes, There Goes You Know Who).

Saroyan’s body of work is obsessed with memory and relentless passage of time. Throughout Places Where I’ve Done Time, we can see that Saroyan is everywhere all at once, a sort of autobiographical singularity that allows him to put his life into perspective. He writes in this chapter, “How lucky every man is in being where he is, and from the millions of years of his people, whoever they are. Well, he can be sure of one thing, if they are here at all, they’ve been everywhere, they’ve been everybody – he is himself the King of Kings.” 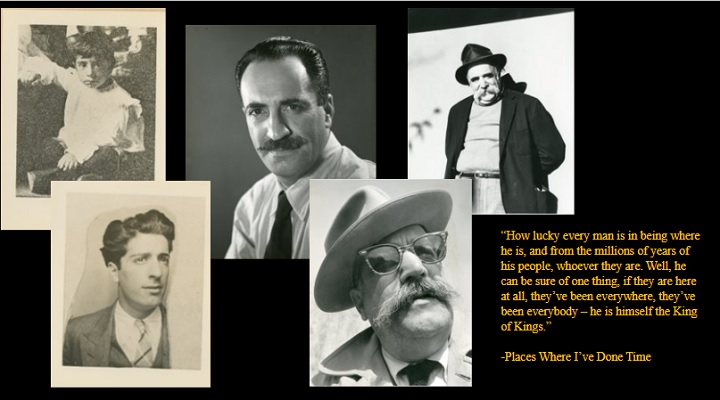