The Place of Places: Chapter 62, House at Ventura and Eye Streets, Fresno, 1908

Welcome back to the Place of Places, a chapter-by-chapter analysis of William Saroyan’s 1972 memoir, Places Where I’ve Done Time. Today we delve into the beginning of consciousness at the House at Ventura and Eye Streets, Fresno, 1908.

This chapter continues down the philosophical path, this time examining man’s first consciousness at birth and what symbols we cling to throughout life. He begins, “The pattern of relationships begins to reveal itself quite early in the life of a man: he has to notice that there is a cave quality to all places. It can’t be avoided. The curves of space can be stretched to straight surfaces, but the place remains a cave, a place. From the most primitive to the most worldly, the human being finds a place to rest somewhere, ready-made, or he makes such a place, and it is inside, it has limits, and it keeps out the things the human being doesn’t want or the things he fears.”

The symbol of a cave was an intriguing one for Saroyan. It is a place of safety, of birth and rebirth. It’s also a place to avoid exposure, for better or worse. He often compares the cave to a womb. As we have discussed in previous chapters, Saroyan was interested in legacy and parentage, also utilizing the egg symbol for this. The cave is similar in tone, but it is also a place of refuge from external threats.

His play The Cave Dwellers focuses on the duality of the cave. It was written in 1955 in 8 days at the Great Northern Hotel, the same place in which The Time of Your Life was written in 6 days in 1939. He was in fact visiting New York for a revival of the latter play when he took a room at the hotel and began writing. The Cave Dwellers ran for about 100 performances in 1957 on Broadway. While it received positive reviews, it didn’t do much to revive his box office appeal on Broadway.

In the play, a handful of poor, downtrodden performers are living together in an abandoned theater in New York. They are starving and seem to be taking on new refugees daily. Eventually, they are pushed out by a demolition crew working on revitalizing the city. He writes in the introduction to the 1958 published script, “The Cave Dwellers happens on the stage of an abandoned theatre because all buildings are caves, and because the theatre is the cave at its best –the last arena in which all is always possible. In the caves of the government and the church, for instance, all has long since stopped being possible, in favor of a pattern of formal repetition, which some of us find only amusing and monotonous, by turns.” Yet in the play, the cave/theatre is also a cocoon, protecting the artists inside from the harsh realities of life outside of art. To Saroyan, art is truth but it’s also an escape. Ultimately, the performers in the abandoned theatre are forced to leave their truth and be engulfed by the world of commerce and so-called progress. The world outside of his cave theatre is disjointed and complex, while the world inside the cave theatre is simple and community-supported, though challenging to survive in.

To expand this idea out to his wider work, the communities of his rural Fresno stories are always tight-knit and living relatively simple lives. This is apparent in the My Name is Aram collection, The Human Comedy, Love’s Old Sweet Song, and many others from his body of work. Though he loved San Francisco, he never quite celebrates city life and defers to rural sensibilities. This was a popular theme in post-Depression literature and art, as cities boomed and drew rural folks away from their communities in the name of commerce. The simple truths first of the farmer and then of the artist became rallying cries for Saroyan.

It's hard not to also make a connection to Plato’s allegory of the cave, as well. In that story, leaving the cave means being exposed to ideas that can be uncomfortable. It is much safer and familiar to stay in the cave, even if it can only offer facsimiles of truth. In The Cave Dwellers, the artists are committed to their own realities, avoiding the harsher truths of the outside. In some ways Saroyan seems ambivalent about that choice. While he believes art is an avenue to truth, he also accepts that it is an escape from the reality that others live in. And he accepts that living metaphorically sadly doesn’t put food on the table.

He writes, “The world itself is a cave. Here and there it is a nicely decorated cave, but the better part of it is a pitiful shambles. Man-made and decorated the world, his cave, on behalf of his kids. On behalf of the animals, on the other hand, nature made and decorated the earth, but the edges are not smooth, as they must be in the world for men, who being always so near danger and death are fussy... He wants time to move in a line from start to stop, because he believes he does something of the sort, starting at birth and stopping at death, neither of which he understands” (The Cave Dwellers). Here again we see how the continuity of family, of mankind can be all-consuming.

He ends The Cave Dwellers with the lead male character, the King, guiding his artists out of the theatre and saying, “Farewell, then –womb, cave, hiding place, home, church, world, theatre—a fond and loving farewell.” In analyzing this, David Calonne explains, “These are all matrices or arenas of human life which must be abandoned for humanity to enter into grace, into oneness, into belonging. Even the theater must finally be left behind. Yet, as the King says, the farewell is also a welcome, a new beginning—a movement from the womb of spiritual development and soul-making to a new and unknown mode of being” (William Saroyan My Real Work is Being, Calonne). As always, Saroyan’s simple writing style belies his much deeper philosophies about how to live an authentic life when the complexities of daily survival threaten the soul itself. 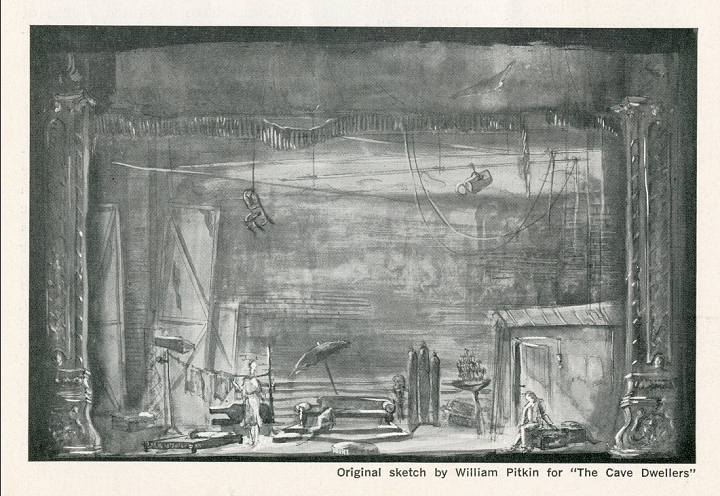 Though the cave is somewhat of an ambivalent symbol, a staging ground where one can be both safely cocooned and also blissfully ignorant, this chapter also returns us to the other round symbols like the womb and the egg. These are much more welcoming and warm symbols with less ambiguity.

He writes, “For the brandnew life, without memory, or at any rate without that stage of development in memory which permits the new man to actually recall specific parts of his actual experience – places, people, voices, words, smells, sounds, and the various flavors of things consumed – for this new man the earliest hours and days and years of his experience are helpless: he finds himself carted about, held, moved, washed, fed, clothed, spoken to, and otherwise attended. Everything has the shape of a womb, from whence he so recently came…And then as time goes by, whether he actually goes to school or learns what he needs to know by other more direct means, he begins to notice his head – its exterior shape, roundish, with something inside there, back of the eyes, the nose, the mouth, and between the ears. There is something back there. It is of course himself, or his family, or the human family, and it is in that round place, and it will stay there as long as he himself stays anywhere. Inside the roundness of his skull there is this person, this part of all persons, and it seems to be himself, but at the same time it seems also be another person, another thing, somebody else, something else. But whatever it is, it belongs to him alone.”

The circle is symbolically rich, even mystic at times, representing eternity, oneness, and potential. These references to roundness, of the skull, of the womb, and in many cases the bodies of women represent such potential for Saroyan. It is a description that he employs often in some of his most Saroyanesque writing. Especially in his short stories, beautiful girls are always round or have round faces to show their fertility and youth. Characters sometimes peer out of round windows when looking out at new opportunities. In Boys and Girls Together, a character collects round, egglike pebbles at the beach, something Saroyan did in real life and donated to his archives. 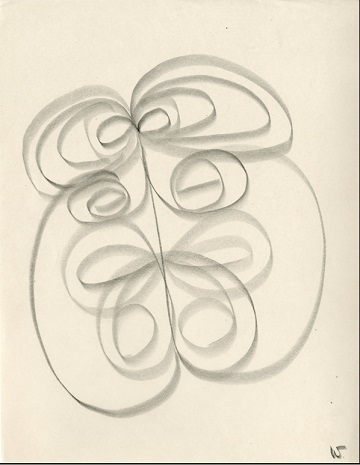 Roundness was a deep archetypal symbol for him. In Inhale and Exhale, he writes, “A ball is something so accurate you got to feel happy about it and I guess everybody likes to catch a ball or throw one or bat one because a ball is such a perfect thing. I don’t know what I mean to say, but maybe you get the idea. You know, it's round and the idea of the thing is perfect and endless. What the hell. Everybody likes to play ball” (The World and the Theatre,” Inhale and Exhale). The egg, the ball, shapes in general intrigued Saroyan with their intrinsic values. His early drawings are full of experimental forms – sharp corners and lines juxtaposed with circles. His entire life was filled with this wonder about form. These early drawings were done around 1930 and he was still thinking about form in 1971 when he wrote the play, Armenians.

In the program notes for the premiere of Armenians, he writes, “In wanting ourselves continued in the fight of the world, what we really want is the continuance of the human family itself, in its broadest, deepest, most complex, most troublesome, most unaccountable, most unacceptable, most preposterous, most contradictory, and most inexhaustibly unpredictable reality. But what for? Why? For the reason that only out of that awful but also magnificent fullness may we expect the human race to begin—to begin, mark you— to become the fulfillment of what has been indicated in his nature and truth for as long as there has been a chronicle of such things—chiseled in stone, painted on cave walls, put up into breathtaking architecture, murmured in lullabies, whispered and roared in symphonies, held fast and secret inside all invented shapes—ship, locomotive, airplane, phonographs, radio, television (for instance). But probably even more significantly in the model of all shapes, the egg, which of course eludes us entirely, having come as we ourselves have come, from the soul and heart of secrecy itself.”

Saroyan concludes this chapter, “And finally he notices the shape of the earth, of fields, of the sea, and he notices the sun and the moon, and it is all around, going around and around.” This chapter is about the cycle of life and consciousness. Once again it is reiterating that the most important place of all is within oneself, in one’s body and mind. From a womb we move to a cave and understand our surroundings from within a skull. The closed circuit of existence was a comfort and a mysterious miracle to Saroyan.