Welcome back to the Place of Places, a chapter-by-chapter analysis of William Saroyan’s 1972 memoir, Places Where I’ve Done Time. Today we are admitted into The St. Francis Hospital, San Francisco, 1935. 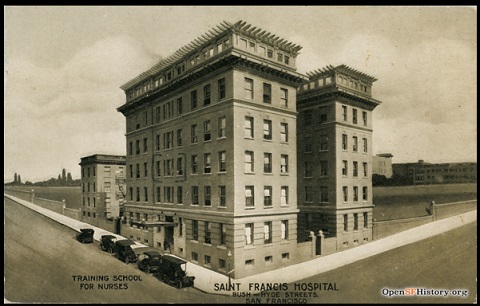 In 1935, Saroyan went on a European tour, visiting many countries, including Soviet Armenia. In Tiflis, Georgia, which was also Soviet, his appendix became infected. He took sick there, thinking it was just from spoiled food, and continued on to London, New York, and then home to San Francisco. He figured his illness was just another small one that is easily gotten over during the course of life.

This is a summary of this chapter, but in Letters from 74 Rue Taitbout, he describes the story in greater detail. He tells us he was eating at the Intourist Hotel and suddenly felt very ill. He yelled at the waiter that they were serving dirty food and then drank several bottles of water all night. He felt weak and pale in the morning, but better by evening, and able to take the train to Erivan.

Three months later his stomach was still hurting, and he was still drinking water, now back to writing in San Francisco. He had rented a small office near Kearney Street to see if he could write better in an office than at home. Running a slight fever, he wrote the story “The Man with the Heart in the Highlands” and continued to run a fever the next day. Remembering that his father had died from a burst appendix, he took a taxi to the St. Francis Hospital. The family doctor, Harold Fraser, was called in.

“I knew at three o’clock that I was in trouble – far-out trouble, that is. I got up and shaved, hoping the trouble would go away, but it didn’t. For my father it did –that is to say, the infected appendix burst, and he imagined his relief was the consequence of an improvement in his condition, rather than a killing accident. In short, he was tricked, and rested in a false sense of well-being, at last” (Places Where I’ve Done Time). 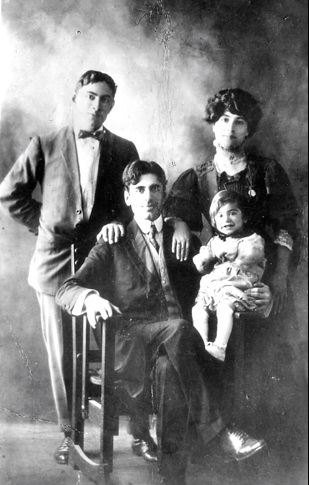 He goes on: “A burst appendix brought on the peritonitis that killed my father in San Jose, California, in July of the year 1911, when he was thirty-six years old. My father got over his illnesses as a rule, as all of us do. But this time he didn’t. And by the time he knew he was dying, it was too late –the game was over.”

Saroyan’s biographies claim that Armenak pleaded for water as he lay dying. And that although Takoohi knew this could mean certain death, she acquiesced, gave him the water, and his appendix burst. His son, Aram, posited in the biography William Saroyan that Armenak was supremely unhappy with his life in America, failing in his religious calling and disappointed with attempts at farming. Aram suggests that maybe Takoohi knew Armenak wanted to die and allowed him that deliverance. Apparently, his last words to her were, “Takoohi, don’t beat the children.”

When Armenak died, William was only three, and he had never known his father like his older siblings did. In Sons Come and Go, Mothers Hang in Forever, he writes, “And so I could love and admire my father and did love and admire him, and at the same time refused to believe in his death, and permitted myself to believe that he would come back, somehow come back to me –the hell with the others, the rest of the kith and kin, my father would come back to me, for I had never known him at all, and they had, and I loved and admired him most, for to me he was a perfect man and had no cock and balls and didn’t fart or anything else gross and stupid and real and shitty like that, and all.” 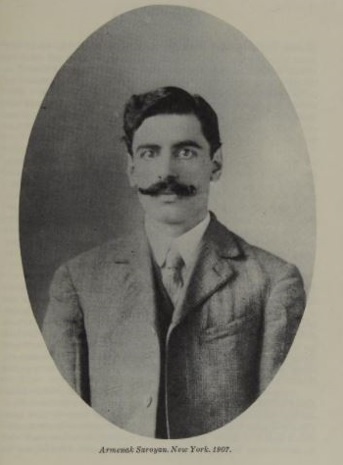 We have discussed this trauma of losing his father in many other chapters, as William realized that it greatly shaped who he was. The family would often refer to Armenak as being too good for this world. The way in which Armenak lived and died featured in William’s thoughts regularly. In subconsciously seeking out surrogate fathers, he would make the connection that Sherwood Anderson also died of peritonitis, like Armenak. Finding similarities in his heroes helped him make sense of his loss.

For William, becoming a writer and surviving appendicitis were symbolic of accomplishing what his father didn’t. Beyond that, Aram also became a writer, as did his own daughter, further solidifying the family trade down the paternal line. At the hospital, the doctor told Saroyan that if he had waited another 10 minutes, his appendix would have burst, and it was likely he could have died. Saroyan rejected the idea that he might not do better than his father in this way. Saroyan’s daughter, Lucy, would also have an appendix illness that needed surgery when she was a child. The repetition and cycles in this family are nothing short of poetic. It’s no surprise that Saroyan was so fascinated by the concepts of the egg and the circle throughout his life.

After the emergency surgery, Saroyan explains,

“At eleven or so, when I came out of the ether, it was all over. I had traveled far and wide and deep in the ether sleep, so that when I finally reached the destination I was trying for all the time, wakefulness, I had the sense of having been in the land of Death, so to put it, among the long, long dead, where I might have traveled forever. Hence, my being back in the world, in the land of life, affected me in a way that nothing before or since has affected me. I felt that I was experiencing the event of birth, excepting that it was into a fully grown body and into a life of much personal reality, many events, much failure and much achievement” (Places Where I’ve Done Time). 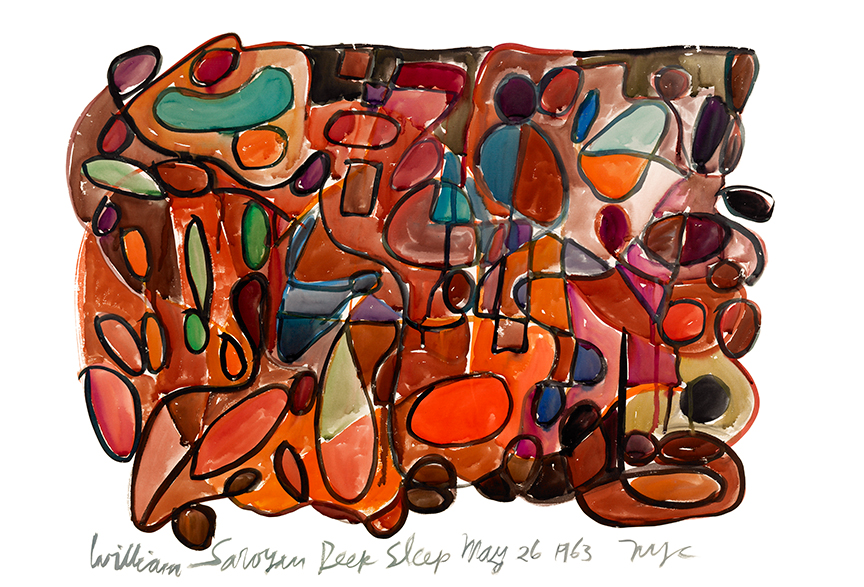 In the previous chapter, we discussed Saroyan’s relationship to sleep. He didn’t get much of it, but when he did, he dreamed vividly and considered it a transition land between life and death. We also addressed how people who claim near-death experiences tend to have disrupted circadian rhythms and sleep cycles, like Saroyan did.

To leave this quote here would be optimistic, as Saroyan leaves this chapter as a changed man, reborn and mystically aware for the first time. But in Letters from 74 Rue Taitbout, he elaborates on waking from surgery, with a more ambivalent long-term outcome:

“At about eleven in the morning, an hour or two after the swollen appendix had been removed, I came to, feeling as if I had just been born into a grown man’s body, aged twenty-seven, and I felt the most profound respect for the mere fact of being alive that I have ever felt, vowing to cherish every instant of my time and to keep myself in good health, pushing aside all of the stuff that only gives the body a bad time –cigarettes, whiskey, anxiety, impatience, excessive work, and so on…But it didn’t work out that way. And I am still so caught up in the limitations of my character that I smoke and drink and eat the wrong kind of food and never do any exercise except a little walking, and so my health is shot –I’m fat, I’ve got ulcers, I’m impatient, I never sleep more than two hours at a time, wake up, read, sleep another hour or two, and so it goes all night except when I am so drunk I am anesthetized into four or five hours of sleep. That is how it is with me at the age of fifty-nine. I’m dying, most likely, but no more than I always have been, but what killed you at the age of forty-four, that’s what I’d like to know.”

This last part is in reference to Doctor Harold Fraser, the subject of the chapter and imaginary recipient of the letter from Rue Taitbout. In fact, he died at age 50 from heart disease. In this Places Where I’ve Done Time chapter, Saroyan reminds us that Dr. Fraser was also the personal physician of James Rolph, the former mayor of San Francisco and governor of California. This is perhaps to remark on the small-town quality of San Francisco in the 1930s and the ongoing way that chance meetings affected Saroyan throughout his life. 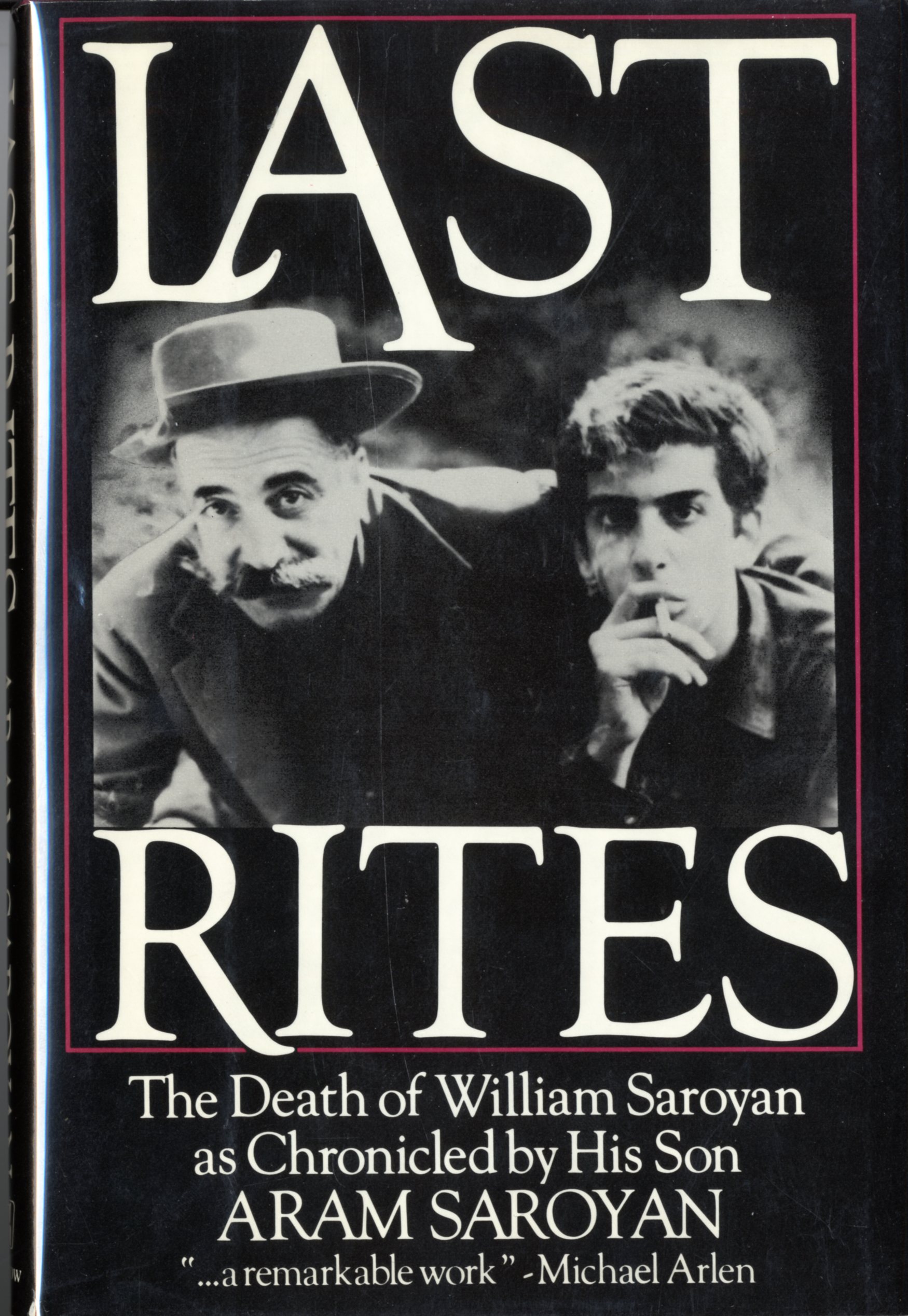 In his later memoirs, Saroyan didn’t shy away from the truth of his defects in character, his vices that made for nearly insurmountable financial problems. That he survived so long past his father perhaps made him feel confused or guilty about his own lifestyle compared against a man others considered unimpeachable. Here again we see the important theme of legacy and what we owe our ancestors. Aram would write a whole book about this in Last Rites, deconstructing his relationship with his own father as Saroyan had tried to do in fits and starts with Armenak.

Saroyan ends this chapter having woken up from surgery reborn, “If ever I felt that a calling out of glory hallelujah made sense, it was the first minute or two after my return to myself and to the world. My gratitude was so great, breathing felt like praying…Life, personal life, human life, my own life, was a miracle involving billions of years of failure and achievement.”

This chapter is about the survival of generations and even the way that our lives can improve upon our ancestors’ lives. As we near the end of this book, this chapter is a slight break from the big metaphysical concepts, but it remains in the realm of big picture analysis of his life. Gone are the small moments and memories that creep into the mind. Now those are fully replaced by life and death experiences and the legacy each generation leaves behind.