Welcome back to the Place of Places, a chapter-by-chapter analysis of William Saroyan’s 1972 memoir, Places Where I’ve Done Time. Today we take a stroll to the Flower Shop, Geary Street, San Francisco, 1930.

“One has one’s chair, or one’s favorite chair, and I had mine. It was one of six cane chairs bought in 1911 by my father, three or four months before he died. And when I learned that these chairs were the last purchase by my father I made up my mind to have them, always” (Places Where I’ve Done Time).

In this chapter, things are places - the things that define us during certain periods of our lives. Sometimes the things are big, sometimes small, sometimes symbolic, sometimes just something we really liked at a certain time. These are mementos of who we used to be. Here, Saroyan takes us on a journey through four things that are places to him, beginning with the chairs his father bought just before falling ill and dying.

Saroyan rescued these chairs at a time in his life when he was exploring the loss of his father, yearning to understand the man he never knew and could barely remember. Saroyan addressed this in many chapters in this book and others, and we know that going to New York in 1928 was in part a way to follow in the footsteps of Armenak. Even just knowing that it was Armenak’s choice to buy these six cane chairs was important to Saroyan, another tiny detail to help him reassemble the puzzle of his father.

He took five of the chairs to a carpenter to be restored and the last, in the most disrepair, to rattan workers in San Francisco. He explains that for years that one chair, in the most disrepair, had been situated at the far end of the breakfast table at 348 Carl Street in San Francisco. This was his chair, at his regular place at the table – a relatable detail for any reader who has their routines and habits.

One day in 1932, his cousin Chesley, aged 14, was visiting. Chesley sat in William’s chair and refused to move, causing a dispute that ultimately ended in the elder Saroyan regaining his chair. Saroyan writes, “I thought he was very stupid not to understand that the place was mine and the chair was mine, and that it would not do for him to remain in the place on the chair in my presence. If I were out of the house, he was welcome to both, of course. He was a good boy, but had an odd mind and spirit – by turns kindly and mean” (Places Where I’ve Done Time).

Chesley was the son of Uncle Aram. In Chapter 4 we saw that Chesley and his wife visited with William in Paris in 1949. Chesley was in search of some advice about professional writing that William was reluctant to give. Chesley hadn’t succeeded as a writer and moved on to other professions, eventually dying in a car crash in 1965 at age 44. Though relationships in the extended Saroyan family were often complicated, they were a tightly knit bunch, often living near each other either in Fresno or San Francisco; they remained lifelines to each other even when they didn’t get along. Getting annoyed at an impetuous teenager is understandable, but it’s also interesting that Chesley was the son of Aram, who was at times a surrogate father to William and at other times a bitter enemy. In this scenario, William is holding onto the remnants of his father that he doesn’t want to share with Chesley this time. The chair was his father and his father was a place.

Saroyan moves on, explaining that he made a lift-top desk in Manual Training class at Longfellow Junior High, stained to a dark mahogany. He kept the desk despite the fact that he considered it poorly made and pointless because it had a slanting top that wasn’t good for writing on. “But I do have the table which I consider mine –from the beginning – and this table is one of the places of importance to me” (Places Where I’ve Done Time). The table is symbolic of independence; we all have those first things that we either made or bought with our own money, the things that our parents or siblings couldn’t claim ownership of.

This may have been especially significant to the Saroyan children, who spent many years in an orphanage sharing everything with many other children. Growing up poor in a large family would have also limited their senses of individuality. For William, who cherished his independence, having this desk be unequivocally his, no matter its quality, was meaningful. The desk was independence and independence was a place. 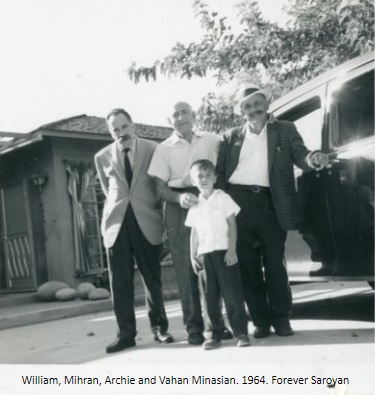 Next up he tells us that Uncle Mihran, his father’s kid brother, went to San Francisco in 1930 and opened a makeshift flower shop, which William worked at. Saroyan bought a table on McAllister Street for four dollars, a surface for them to work with the wholesale flowers on. The shop lasted until Easter, about six weeks, then closed, and they were left with this table. William had it sent to the front room of 348 Carl, where he did his writing. “The table has served me well these many years – almost forty. I have written many works at the table, including, perhaps most important of all, the stories in my first book” (Places Where I’ve Done Time).

Mihran was the youngest of Hripsime Saroyan’s children and another surrogate father and friend to William and also to Archie Minasian, whose father had also died young. There was a quiet sweetness in the paternal Saroyans, overshadowed by Lucine’s louder and more aggressive Saroyan clan on the maternal side. Recall that there was no biological relation between William’s paternal and maternal Saroyan’s sides, though they shared a last name.

It was Mihran who found William lost in Los Angeles and brought him home; it was he who lent William train fare to travel to New York in 1928; years later Mihran lent William $10,000 for a house, and there were many more loans Mihran made to Bill. Though he was always there to lend money, Mihran had a much larger role as a supporter of William from the start, cheerleading him in his endeavors.

The uncles Mihran and Aram were polar opposites, as is noted in multiple Saroyan biographies. Lee Lawrence, in his book Saroyan: A Biography, wrote, “Mihran was as warm and kind as Aram could be cold and mean-spirited.” William and Archie both wrote of Aram’s cruelty, and yet they were also amused by him. With Mihran they felt more protective.

In Letters from 74 Rue Taitbout, Saroyan writes, “Mihran always had a kind of earnestness and simplicity that put him to asking questions that were very funny to others.” In a letter to Bill in 1961, Archie wrote, “I won’t pollute this page, having mentioned Mihran, to tell you of Aram.” 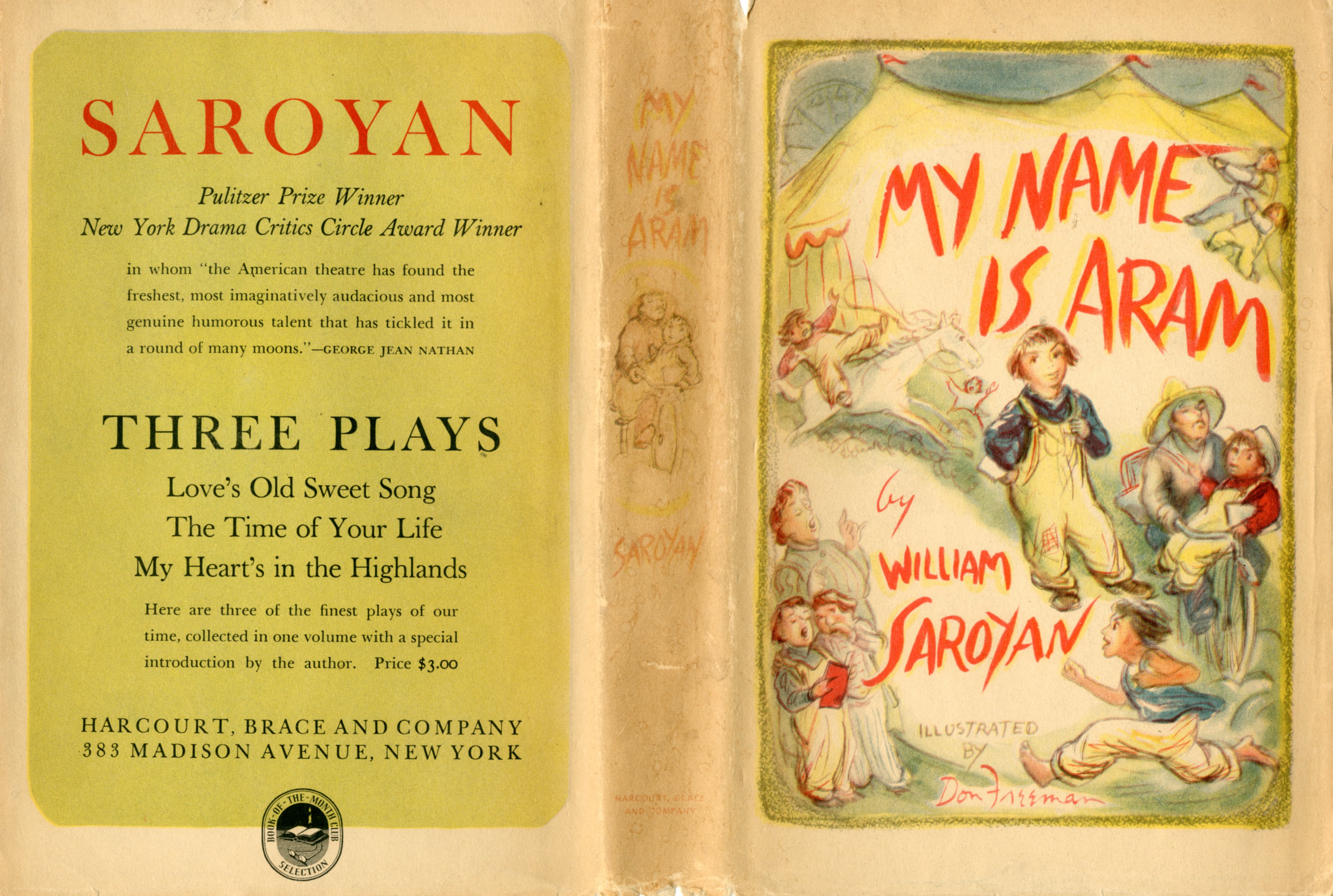 Both men fascinated William. Many of his family members would be represented in the book My Name is Aram, and Mihran is drawn as the stoic, dedicated uncle who attempted to grow pomegranate trees in Fresno, though they would not grow. In reality, Mihran was briefly a farmer before hard times shut him down. He went on to own a women’s dress shop in Fresno, the Mona Lisa, which he ran with his niece. Though he was a bachelor with no children, he was everyone’s favorite uncle.

Aram and Mihran were contemporaries and spent time together as extended family. Lee Lawrence, when interviewing the Saroyan family for his biography, writes, “Mihran was frank in expressing his complaints about Aram to the boys. ‘He has no nobility,’ he would say” (Saroyan: A Biography). Armenak’s poetic heart was alive in Mihran, and it butt heads with the uncouth Aram.

In the essay, “The Last of the Armenian Plays,” Dikran Kouymjian writes, “An even earlier unpublished play was considered by Saroyan himself as part of his statement on being Armenian. One day he called to say he wanted me to read another work of his. It was Is There Going to Be a Wedding? a one-act play of forty-eight scenes written in 1970-71. It takes place in various locations in Fresno between 1919 and 1923 when Saroyan was entering his early teens. The main characters are himself and his older brother Henry, his mother, and two opposing uncles, Mihran, the idealistic and intellectual tailor, and Aram, the materialistic and pragmatic lawyer. The play creates the Armenian environment the young writer grew up in while at the same time exposing the opposing forces after his soul.” These dual influences appeared frequently in Saroyan’s writing and in how he perceived the world around him.

The table from the flower shop was Uncle Mihran’s gentle encouragement and support, and that support was a place. 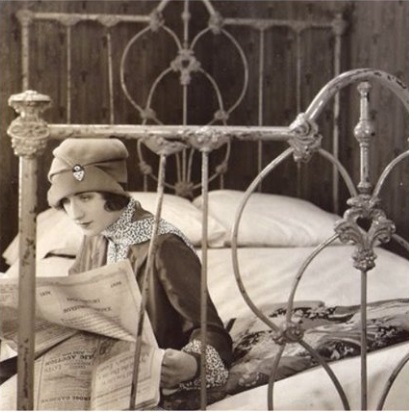 Lastly, Saroyan describes the pipe bed that he had as a young child and liked very much. Or, if not a pipe bed, he clarifies, a bed with a headrest and footrest, old-fashioned metal parts, and a spring for the mattress. “The Head and Foot were of iron, not pipes, and they were designed in a decorative manner. Such beds were common, and I liked mine, but after we moved from 2226 San Benito Avenue it got lost in the shuffle, and hasn’t been seen since” (Places Where I’ve Done Time). Domestic iron bed production stopped in 1914 when the US entered World War I. Afterward, they weren’t considered cost effective and largely disappeared. Saroyan’s bed would have been older, maybe even from the 1800s, old furniture that the family had gathered inexpensively as they struggled to make money to live.

Like the lift-top desk, the bed would have been a place of one’s own. It was in this bed on San Benito Avenue that young William could sleep and dream vividly, that place between life and death. San Benito was the first house the Saroyans settled in after returning from the orphanage, so again it was importantly a bed he could call his own after experiencing several years of communal living at the orphanage. And it was iron - sturdy and permanent, another comfort after Fred Finch. The fact that it was decorative probably also held it apart from the presumably plain orphanage beds. The bed was security and security was a place.

Like his other late chapters in Places Where I’ve Done Time, Saroyan is playing with the definition of “place.” At first it was locations, and then it moved onto states of being, and now it has become things. All of these connect to his emotions. And while Saroyan wasn’t too open about his feelings, he had ways of expressing them in perhaps unconventional ways, as we see throughout this book.