The Place of Places - The Ritz Hotel, Boston, October 1939

Welcome back to the Place of Places, a chapter by chapter analysis of William Saroyan’s 1972 memoir, Places Where I’ve Done Time. Today, we check into The Ritz Hotel, Boston, October 1939. 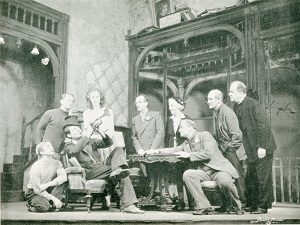 Saroyan begins this chapter by explaining that after he left Dublin in July, he sailed to New York and took a train to San Francisco. There, he wrote the plays Sweeney in the Trees and Love’s Old Sweet Song. In May of the same year, he had written The Time of Your Life in six days. Saroyan’s friend and producer George Jean Nathan encouraged him to write The Time of Your Life after loving My Heart’s In the Highlands, and proceeded to connect Saroyan with Eddie Dowling. Saroyan also wrote a part for his cousin, age 20. This was Ross Bagdasarian and the role was the newsboy.

From rehearsals back east, Ross writes Bill letters explaining that the production is great, the direction is great, the actors are great, the play is great. “In short, my cousin told me in unmistakable language that the play was being murdered by a lot of arty-farty people” (Places Where I’ve Done Time). Saroyan booked a flight to New York, took a train to the rehearsals in New Haven, and was disheartened by what he saw. “It was unbelievable. It was stupid. It was pretentious. It was queer. It just wouldn’t do” (Places Where I’ve Done Time).

With Bobby Lewis directing, the play seemed to be in good hands. Saroyan had liked Lewis’s artistic rendering of My Heart’s in the Highlands and blessed Lewis’s stylistic, poetic approach to The Time of Your Life early on. However, the play bombed at tryouts in New Haven. Thornton Wilder was said to have approached Eddie Dowling, saying, “This thing has great beauty. It needs direction, Eddie, and it needs a new production, and it needs several new members of the cast” (Lee, Saroyan: A Biography). He believed the play could be saved.

Saroyan and Dowling fired Lewis and took over as co-directors, moving towards realism instead of art. Lawrence Langner, a key member of the Theatre Guild, was unhappy with both Lewis’s rendition and Saroyan’s, and butted heads with the directors. After the failure in New Haven, Langner, described it as, “incredible chaos. Nobody, including the actors, seemed to know what the play was about. A bewildered audience left the theatre and learned from the papers the next day that the drama critics were equally bewildered” (Leggett, A Daring Young Man). 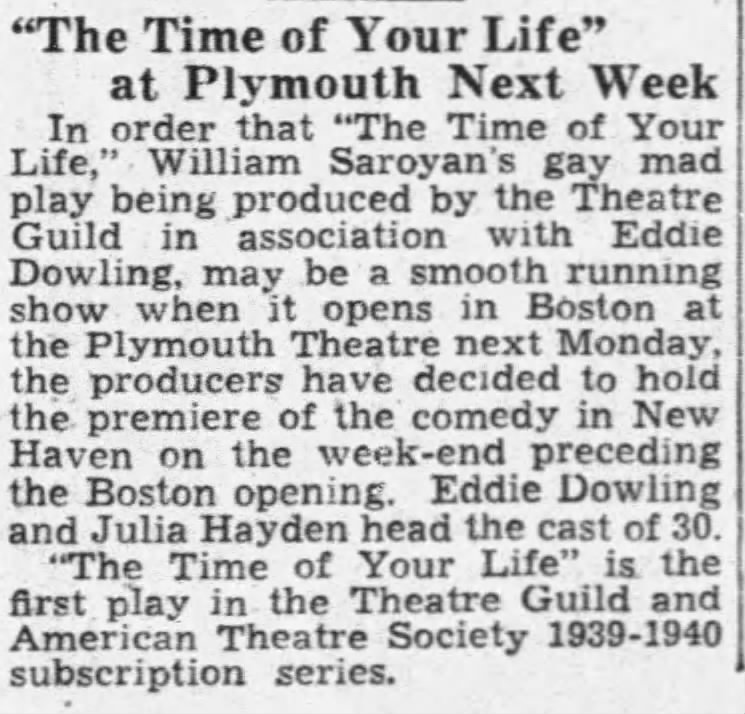 But George Jean Nathan remained a stalwart supporter of Saroyan and wrote of the beauty of the play in Newsweek. With Lewis’s score thrown out, the set thrown out, and several key actors replaced for the Boston run, the cast and crew were nervous. With each performance, the play faltered more as actors lost confidence. The reviews were mostly grim. Saroyan felt he was staking his reputation as a playwright on the play. Firing the “bogus Stanislavski-style actors” that Lewis favored, he replaced them with working actors, who “looked and moved right” (Places Where I’ve Done Time).

At rehearsals, Saroyan, who had never directed before, shouted at actors from his threatening seat on the stage where he ate pears and spit the seeds out on the stage. The producers complained that he didn’t know how to direct his actors. They expected Saroyan’s takeover to ruin the play entirely and were readying a backup premiere for their subscribers in New York.

But then, suddenly the play opened in New York and, to almost everyone except Saroyan’s surprise, was a hit. In New York, it ran from October 1939 through April of 1940, then toured before a return engagement in the latter half of 1940. It was revived on Broadway in 1969 and 1975. Drastic changes had been made to the play, but it survived and thrived. Dowling and the Theatre Guild teamed up with Saroyan again for Love’s Old Sweet Song, but the magic wouldn’t be repeated twice.

As discussed in the last chapter, 1939 was Saroyan’s miracle year. But it didn’t come easily. With all of his works, he insisted on having a certain amount of creative control. This created a problem for many producers whose job it was to pick the right people to manage their productions. In this case, Saroyan got away with taking over. In the case of MGM’s The Human Comedy film, which he wanted to direct, he didn’t succeed and was forever bitter about it. Saroyan’s vision for his work was clear and it was beyond frustrating to him to see a different approach to his creations.

The auteur personality is notoriously a difficult one on Broadway and in Hollywood, and makes many powerful enemies. This also happened at the Belasco when Lee Shubert closed down The Saroyan Theater, as we learned in Chapter 26. But when Saroyan reworked The Time of Your Life, it ended up impressing everyone.

“Backstage one evening came a famous American playwright, Phillip Barry, author of Here Come the Clowns. With tears in his eyes, he said, ‘You have done what all the rest of us have wanted to do but haven’t been able to do.’ I was deeply moved, but the play was still far from what I knew it really was and believed it would soon become” (Places Where I’ve Done Time).

Ross Bagdasarian reported the backstage scuttlebutt every night and the actors were coming around to frenetic changes and eventually, “everyone got the idea, even the producers” (Places Where I’ve Done Time). Saroyan tells us, “The two weeks in Boston, getting the play ready for New York, were full of backbreaking work, but they were great weeks, too” (Places Where I’ve Done Time). The pre-Broadway runs in New Haven and Boston were what is called theater tryouts. Before a play goes to a demanding audience like those in New York and London, it goes through a week or two in a smaller city. There, the director and producers can work out any flaws with a more forgiving audience. Boston and New Haven are popular tryout locations for Broadway.

The theater in Boston, where he got to rework the play, was four or five blocks away from his hotel on Stuart Street, and though he doesn’t name it, it was the Plymouth Theater, which opened in 1911. It had seating for 1500 people and was known for its pre-Broadway openings. In 1957, it was converted into a movie theater and renamed the Gary Theater. The theater and hotel were also on the same street as the offices of Hairenik, a periodical that very early on published Saroyan’s stories and that he would later partner with to develop The Armenian Review to showcase Armenian artists. This isn’t mentioned in this chapter, though.

But where does the Ritz come into this? It doesn’t seem particularly germane to the drama of the moment. In Boston, he stayed at the Ritz Hotel, which opened in 1927 and was the height of Bostonian snobbery at the time. Today it is called the Newbury Boston. Many chapters in Places Where I’ve Done Time are named for the hotels he stayed at, even if the chapters are really about something else. But hotels meant something to him. As he wrote in the previous chapter, “Stopping at hotels in the big cities of the world is a joy to a new traveler, and I must not forget this, for it is one of the delights of the human experience. The hotel one stops at in a new city doesn't have to be the best in town by any means. It can even be one of the worst, but being there, in that new city, is a beautiful thing. Everything is new, everything is different, everything is ready and right. The old, shabby hotel is new to the traveler, the old furniture in his room is new to him, the old people at work in the hotel are new people, and different, and astonishing” (Places Where I’ve Done Time).

Hotels represented his travels and his ability to pay for travels. Sometimes others footed the bill, other times they didn’t, sometimes the hotels were divey, sometimes they were luxury. Looking back on them, they well-represented progress and setbacks in his career and the era in which he lived, when huge new hotels were opening and closing within his lifetime. A large number of American hotels opened in the 1920s and 30s and so he was often staying in them in their prime, which must have been a rare excitement.

In this chapter, he also tells us that next door to the Ritz was a very famous fish restaurant to go with the fresh staging of the play. He doesn’t name this, but it was likely the satellite location of Union Oyster House, on Stuart Street. The original Union Oyster House on Union Street opened in 1826 and was a famous Boston landmark. This, too, was a sort of badge of his success. This chapter is about redemption, pride, and integrity. He always treasured the magic of that year, 1939. 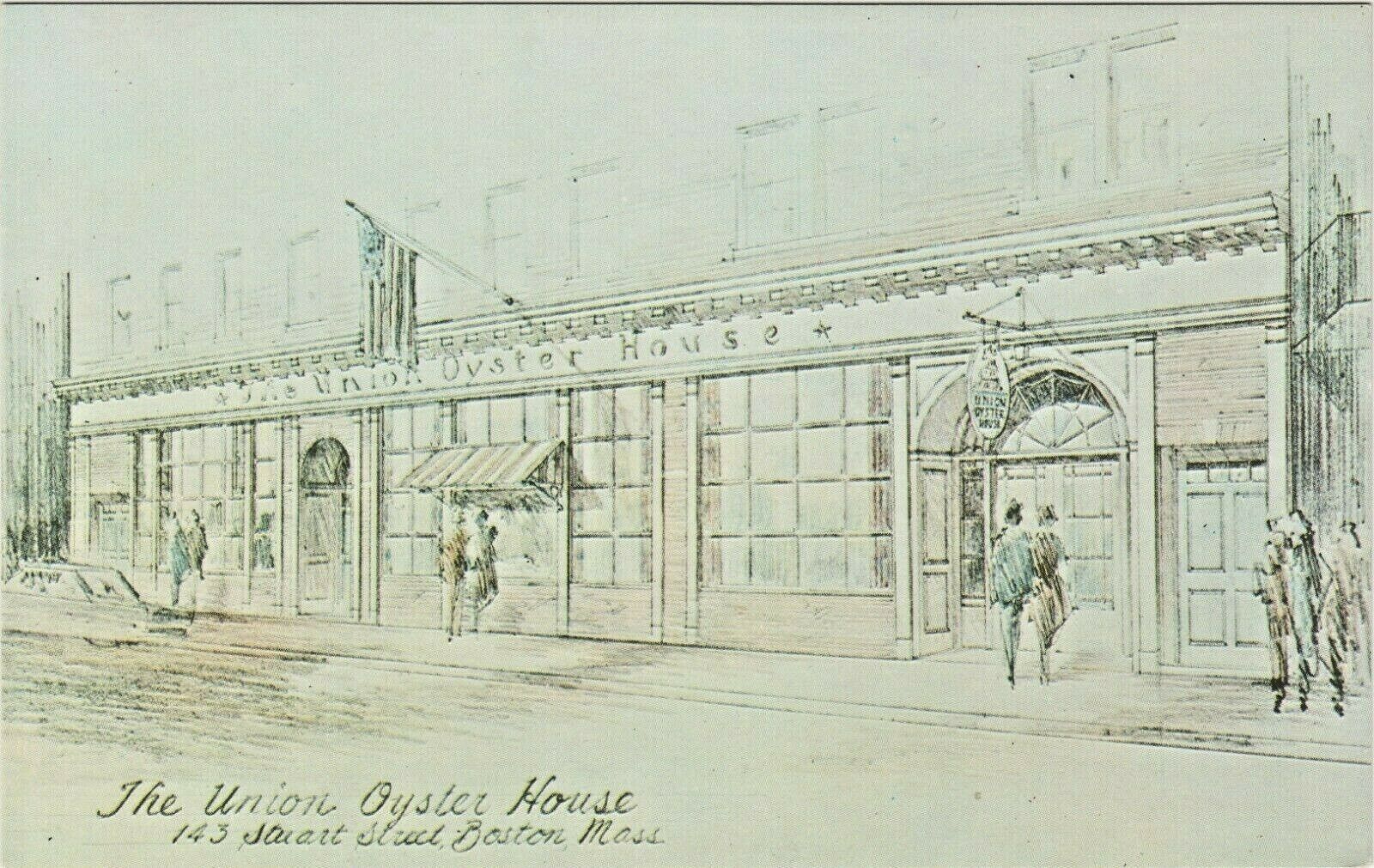