Where Can I Find Saroyan Today? 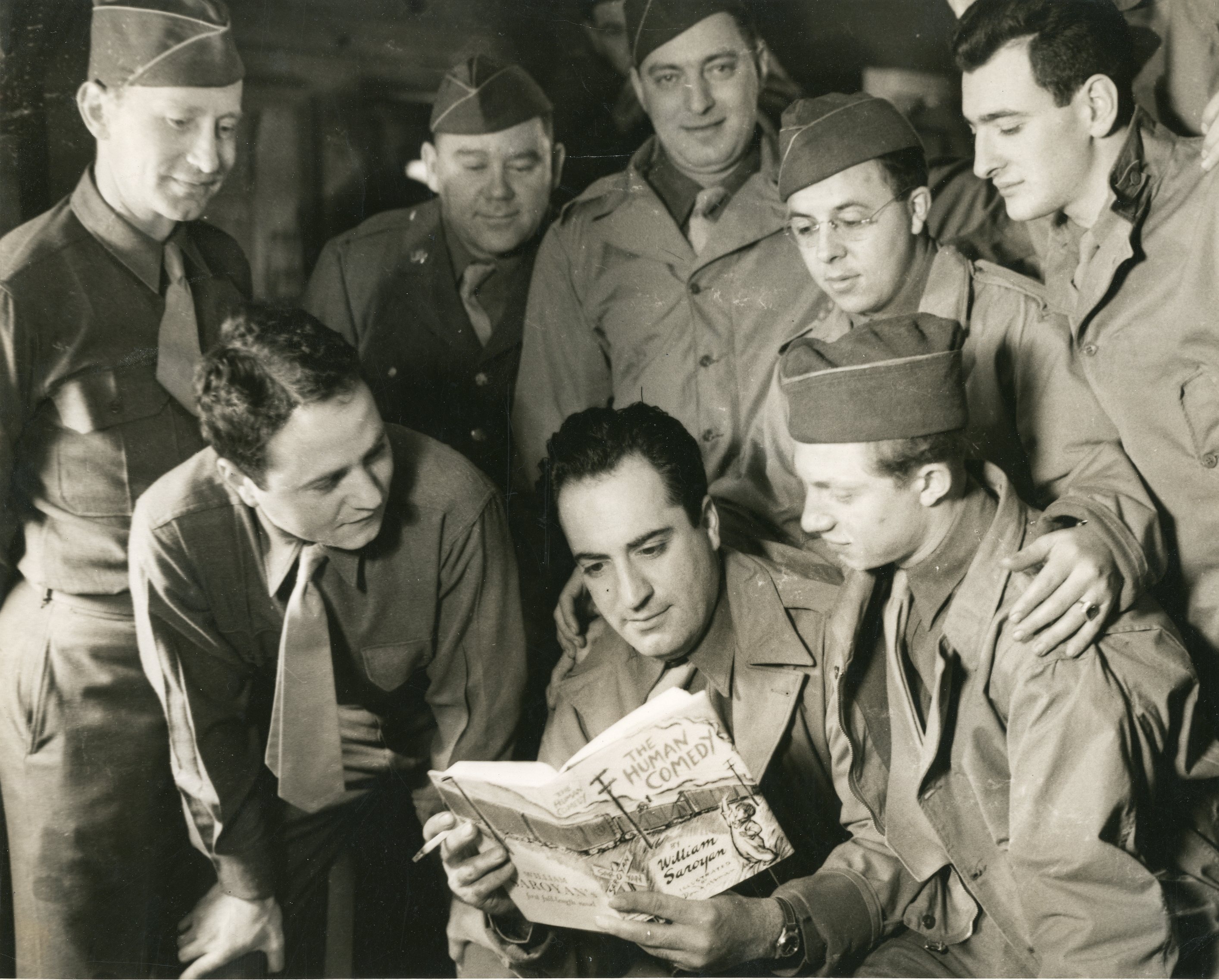 One of the most frequently asked questions about William Saroyan's materials is exactly where is the rest of it, and how do I access it?

Few authors manage to have their entire output in a single location, especially if they were publishing frequently, were prolific letter writers, and created non-written material as well. It's not unusual for a suitably prolific author to have their published work held in one archive, their letters in another, and a third holding recorded audio-visual material. Even an author who establishes a foundation or archive dedicated to their work, as William Saroyan did, further materials such as letters, manuscripts, and various ephemeral items can make their way into other collections. This can make research and investigation into an author difficult, not to mention exceptionally time-consuming.

Saroyan's paintings are in both private and public collections. Major museums such as the Museum of Fine Arts, Boston, the de Young Museum in San Francisco, the Fresno Art Museum, the Crocker Art Museum, the Bakersfield Art Museum, and several university museum collections hold his paintings, mostly created in the 1960s. As with most museums, art works come on and off display quite frequently, meaning they may not be public-accessible. Some museums will include images in their collection website searches, giving at least some access. The Antaeus Theatre in Glendale, California, has several Saroyan works hanging, as well.

Several libraries hold varying amounts of Saroyan's written material, including the Fresno public library, UCLA, UC Santa Barbara, University of Southern California, California State University at Fresno, UC Berkeley, and Cornell University. Accessing these materials can be difficult, and largely research within them must be done in person. Luckily, the Online Archive of California makes it quite easy to search through finding aids relating to Saroyan, and nearly any other topic you could imagine. 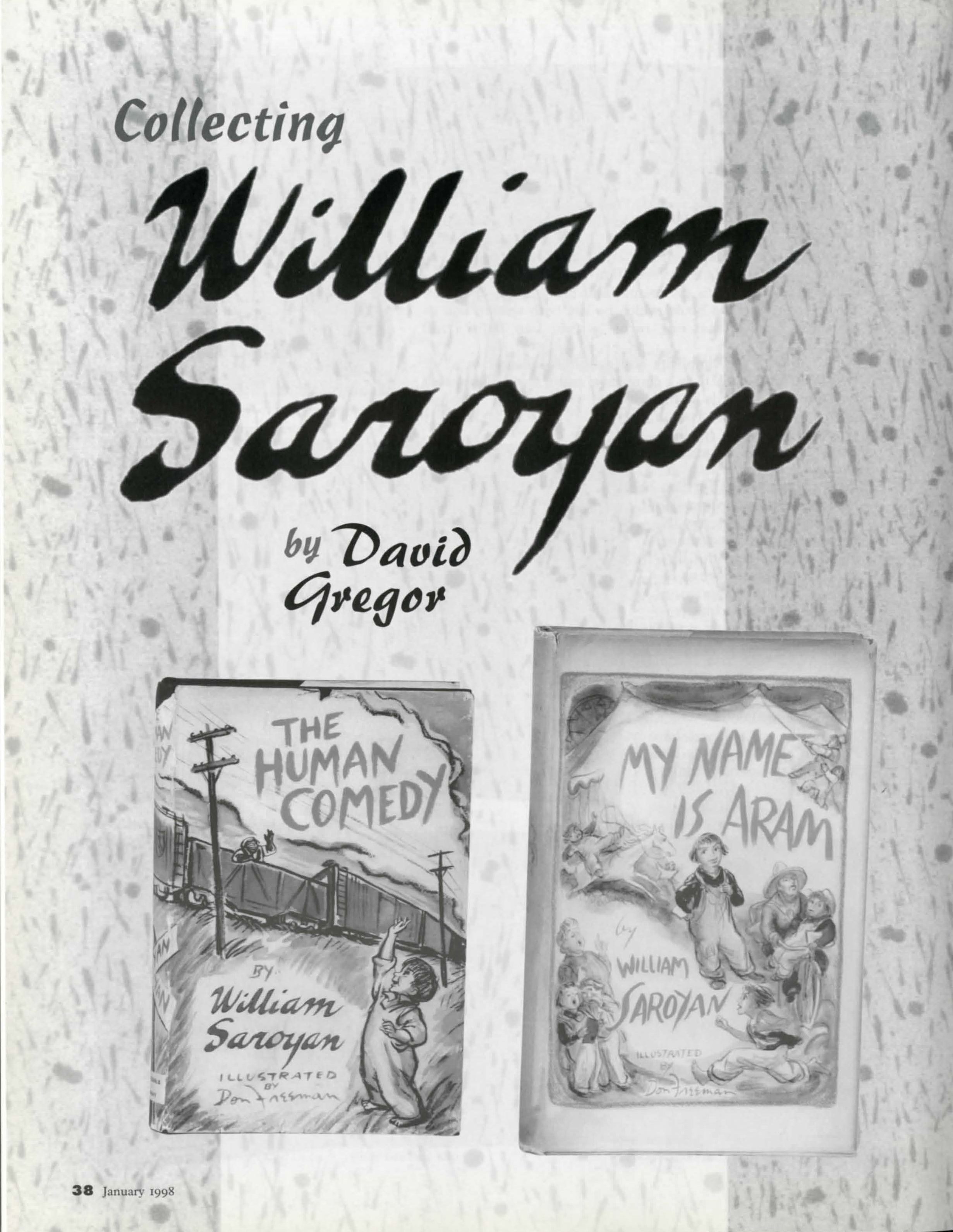 There are many private collectors who hold some truly phenomenal Saroyan artifacts. Since William was such an active correspondent, often sending several letters or telegrams a day, there's a great deal of material that is currently in the hands of collectors or held by the original recipients' families. In addition, book collectors and antiquarians love Saroyan's work for the variety of editions and the number of inscribed copies. These are prized, and sometimes hoarded, by collectors. Private collections have a way of being broken up before they can be acquired by a collecting institution. The combination of eBay, Craigslist, a burgeoning online collection network, and ever-increasing prices for antique books, has led to piece-mail sales of much of Saroyan's work. Several public collections also started out by the acquisition of one or more private collections. Getting a hold of materials in private collections can be a very difficult matter, and pretty much requires a personal connection to discover.

The largest single collection of materials is the massive collection that William Saroyan himself had overseen and was used as the basis for the William Saroyan Foundation. During Saroyan's lifetime, he had deposited material with the Bancroft Library at UC Berkeley, and eventually the entire collection came to the University. This amounted to almost 200 boxes worth of material, one of the largest single-author collections in any American university library at the time. The library cataloged and conserved the material for several years until 1996. The Saroyan Foundation, who owned the materials at Berkeley, was approached by Stanford to see about arranging the transfer of the entire collection. The Stanford libraries, under the leadership of Michael Keller, had set a goal to acquire several significant collections to cement Stanford as "an institutional curator of culture." The wheels were set in motion, quietly at first, but eventually an agreement was struck between Stanford and the Saroyan Foundation, and filings began to finalize the transfer. The initial filings gave the impression the Foundation didn't seem particularly sure the move would be go unchallenged -

A petition was prepared to obtain Superior Court approval of the transfer to Stanford, “to the extent it might be considered inconsistent with the terms of the will of William Saroyan.” 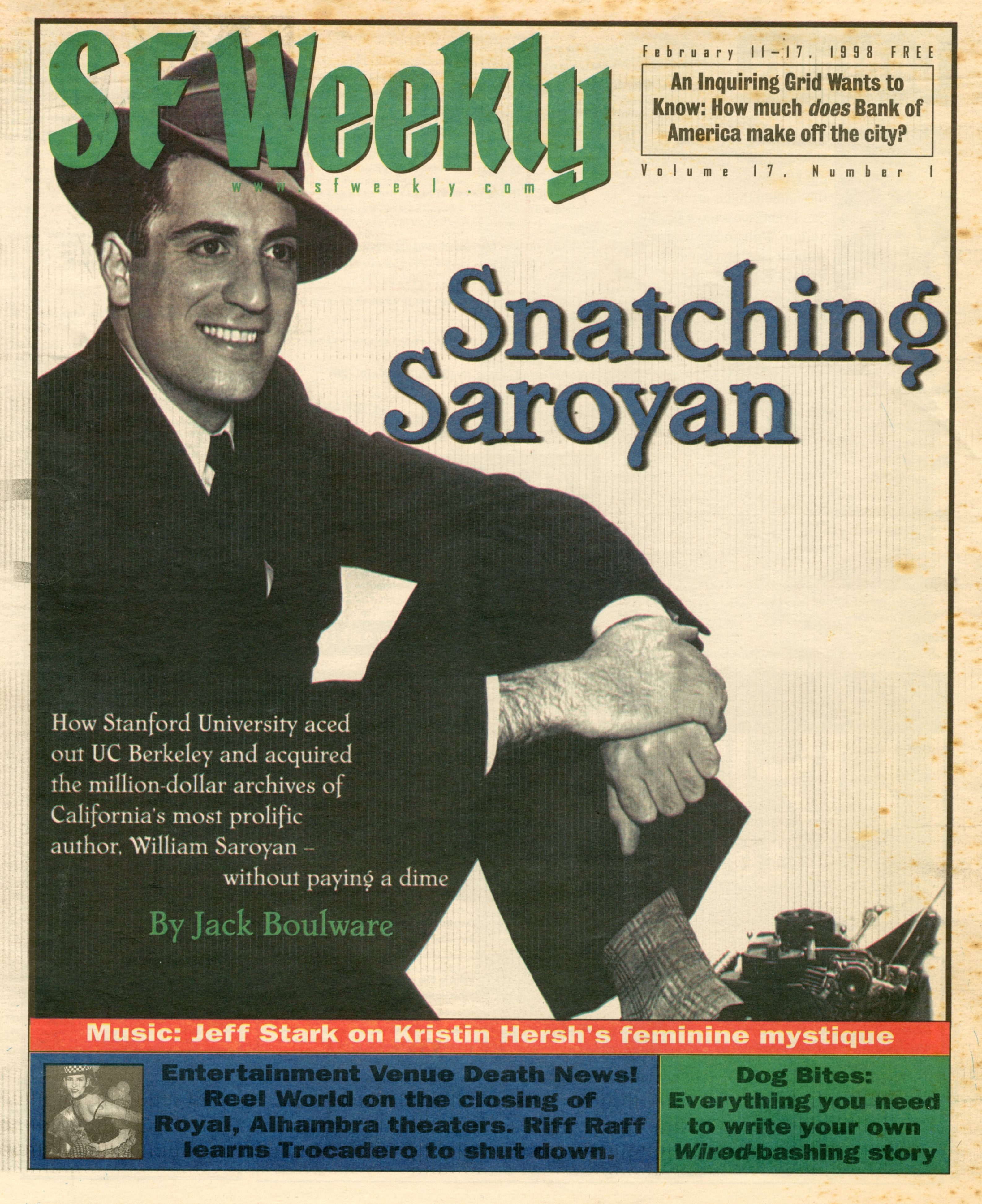 Stanford received the entire collection, as well as the stewardship of the copyright to all of Saroyan's work. This, along with Stanford's acquisitions of large collections relating to Allen Ginsberg, John Steinbeck, and many others, certainly made the university's libraries the expected cultural dynamo that Keller had set out to create. The Saroyan Collection today represents the single largest collection of his material, and one of only a few collections of its kind that also handles the full copyright of an author's published works. Little of the collection is currently available online, though a thorough finding-aid is available. The library can be contacted by researchers and journalists for access. The matter of the Saroyan collection's disposition is still discussed in library and museum studies classes as a case study in the difficulties of how to weigh what's best for large collections when it comes to preserving material, working with third party organizations, and honoring a creator's wishes.

For the most complete telling of the events, read the exceptional SF Weekly article Snatching Saroyan from 1998.

The Bancroft Library still holds some Saroyan materials, including a large collection of documents and photographs from his niece Jacqueline Kazarian. This large collection was donated after the Saroyan collection moved to Stanford and sits alongside other items that had come in from other sources as well.

Forever Saroyan is lucky enough to have a strong collection of materials covering nearly every period of Saroyan's work, and at least some representation of every medium he worked in. The hundreds of books and magazines cover his authorial work from start-to-finish. Manuscripts cover his published, as well as several unpublished and hand-annotated stories. Recordings and videos cover his work and his appearances on television and radio. Letters help us look into the ways he communicated, both personally and professionally. It is a collection largely compiled from several smaller collections acquired over the last decade. We are also lucky enough to be the collection that looks not only at William Saroyan's life and works, but are also able to put that into context with a large amount of material detailing the life and work of his family members. On our site, you'll find everything from scanned letters to music, video, and scans of manuscripts. In-person research can be arranged by emailing .