William Saroyan’s star rose and shone beginning in the mid-1930s. He was certainly the most prolific mainstream writer of the decade, winning awards, publishing stories in the top magazines, and selling large numbers of books around the world. This period followed the exciting decade of the 1920s, where Saroyan came in as a cub of 12, and left as a published author at the age of 22. While it would be a couple of years before he exploded, his initial work at the end of the Roaring 20s is not to be overlooked. 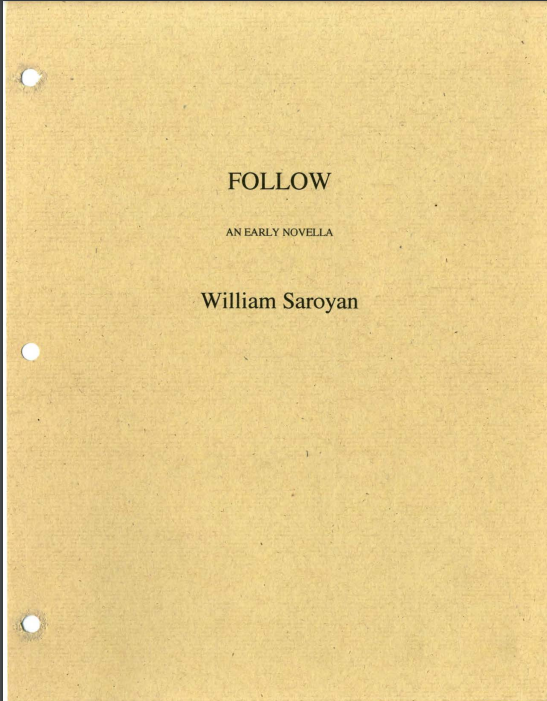 Sometime around 1928, Saroyan wrote a novella-length work called Follow. Follow feels as if it were meant to be Saroyan’s introduction to the world, but it was not published in his lifetime. He submitted it several places, notably to The American Caravan. The story is a largely autobiographical tale of a young man who wishes to escape his family and become a writer. Saroyan would work with this idea several times, and in Follow you see many of the elements that would make him a super-star less than a decade later. It was eventually published, in serialized form, in the Fresno Bee in the spring of 2008 to celebrate Saroyan’s centenary. Original manuscript materials are in the William Saroyan collection at Stanford. 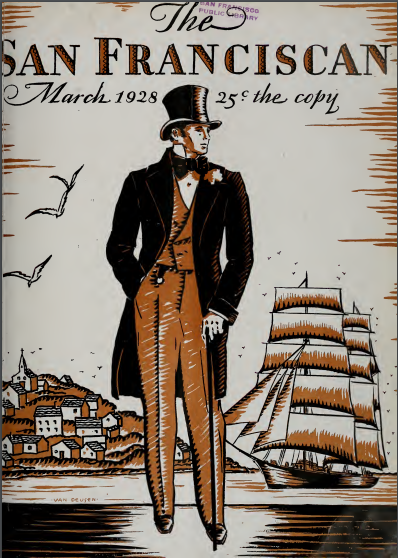 While he had begun writing when he was a teenager, Saroyan’s first publications came around the time he turned twenty. In March 1928, "How to Write" appeared in The San Franciscan. A fascinating little story, it is as much a story about a pair of star-crossed lovers as it is about the process of writing the story of a pair of star-crossed lovers. It’s a light story, a fun story, and one that would not feel out of place in today’s literary marketplace. The prose feels somehow different, less staccato, than Saroyan’s work just a few years later, but there is a sense of playfulness that seems very much in line with his works of the 30s and 40s. It is another example of what we today would call post-modernism, only appearing in the heart of the Modernist movement. While a somewhat forgotten publication these days, The San Franciscan is not unknown. There is also a brief reference to a piece appearing in The San Franciscan made by Saroyan in a letter to Charles Caldwell Dobie in 1929.

In April, 1928, the magazine Boulevardier featured what has been referenced as Saroyan’s first publication – “About a Man who Wanted to be in Love.” The story actually opens with a man contemplating suicide, but then settles into being about his pursuit of love, or more accurately, the pursuit of a woman to fall in love with. His exploits are detailed, and in a way seem to indicate the kind of narratives we read today on involuntary celibates (incel) forums… right up until the last two paragraphs. Then we see exactly the sort of story this is, and perhaps learn a little about Saroyan’s own views on love, sex, and marriage. 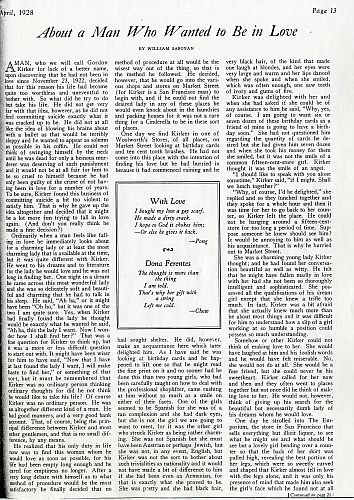 Stylistically, it is very much in line with the work that would be included in his early collections. Perhaps a bit looser than the prose we see in The Daring Young Man on the Flying Trapeze, the story shows that Saroyan had been honing his technique, and here presents something a bit more fluid. His sentences are a touch longer, and there’s more description, and even the use of a stream-of-consciousness third person narrative, not an easy thing to pull off. It is also a story that is built around a character turn. We see the man as somewhat hapless, and perhaps even hopeless, but then are turned on to the fact that his story is actually one of selfishness and denial. That makes this a heavier story than one might have thought, but also one that is telling of where Saroyan’s eyes will eventually rest: on stories of the contradictions between life as it is lived, and life as we present it to others.

The December 1928 Boulevardier also featured a story by Saroyan. “The Big Midget and a Lady,” though a title that would never fly today, is an interesting story that actually feels more like his later works, especially Boys and Girls Together, than those he would publish early in his career. The prose is taut, largely unadorned, with the clarity of expression that he would become known for. While more slice-of-life vignette than actual story, it tells us of an unhappily married couple. In that way, it appears that Saroyan’s vision of life is far ahead of his then-twenty years, and certainly foreshadowed his own take on marriage following both of his periods coupled to the former Carol Marcus. There are aspects of the story that are troubling to a modern reader, as is often the case reading magazine writing from the 1920s. The relationship between the characters appears at least somewhat abusive, and the writing presents material that may be read as misogynistic in a contemporary understanding. Several of Saroyan’s major themes when it comes to personal relationships, including the way that individuals can use their own roles in them to bolster their own views of themselves, pop up here before emerging again in several of his stories, plays, and novels.

Until more recent scholarship uncovered these early stories, they were almost completely forgotten. Why? The clearest reason would be the publications themselves. Both The San Franciscan and Boulevardier were regional publications. The San Franciscan would have been very difficult to find until recent years when sites like eBay created a market for long-folded publications. The fact that there were at least two other magazines called The San Franciscan, one of which being an important artifact of the Beat movement, probably didn’t help. Archive.org does have scans of many issues, apparently formerly held by the San Francisco Public Library, including the March 1928 issue. Boulevardier, a Detroit-based magazine with little circulation beyond the metro area, is also fairly obscure. Boulevardier is little-known today, and there’s often confusion with a contemporaneous magazine called Boulevardier that was published in Paris as an outlet for American ex-pats. Few libraries or archives hold any copies, or even microfiche, of Boulevardier.

The late 1920s and early 30s saw an explosion of localized magazines. The New Yorker’s spectacular success from its introduction in 1925 inspired many new publications that attempted to bring a local flavor to a general-interest magazine. Boulevardier and The San Franciscan were joined by publications such as The Coast, another San Francisco publication, and Inland Topics, out of Chicago. This growth in the number of magazines helped young authors like Saroyan find homes for their writings, but at the same time, likely hindered many from finding a large, nation-wide audience. Saroyan made good use of this flowering of publications, publishing stories, essays, and poems in many of them. 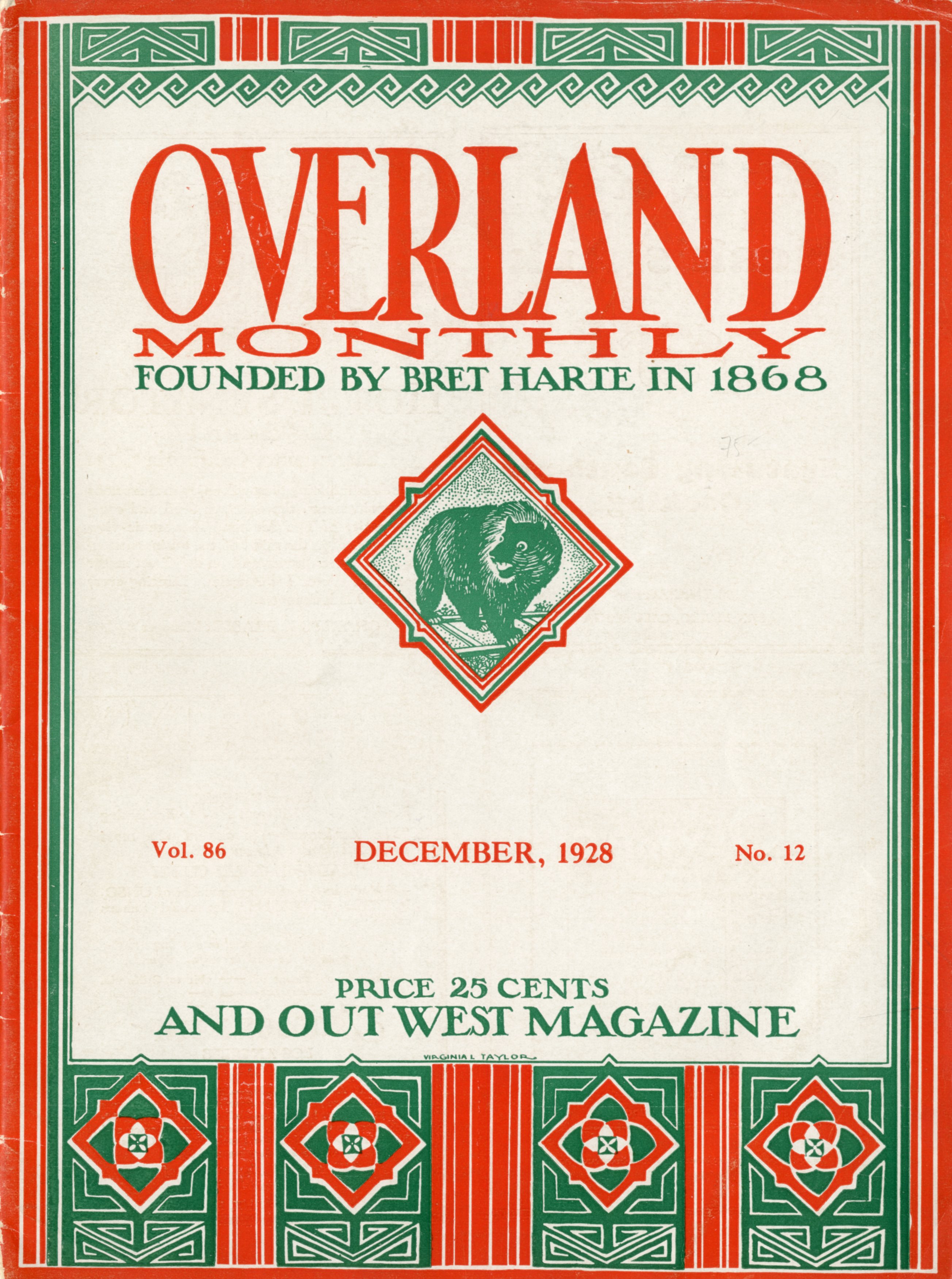 Most point to The Overland Monthly and Out West Magazine’s August 1928 issue as Saroyan’s first publication. This is at least somewhat understandable because Saroyan himself said that Overland had been his first in the 1960 anthology My First Publication, compiled by Book Club of California. Overland Magazine, founded in 1868, was initially edited by legendary Californian writer Bret Harte, giving it a cachet the other early publications just didn’t hold. Overland went through many editorial changes over the decades that followed, including merging with Out West in 1923, leading to a considerably longer name. By 1928, it was being edited by Arthur H. Chamberlain. It had certainly changed direction by that point, moving into the role of a magazine focused on integration of Art Deco-tinged art and writing primarily by California authors.

The first story of Saroyan’s to appear in Overland was “Preface to a Book Not Yet Written.” It is another entertaining piece where Saroyan looks as much at the process of publication as he does the act of writing it. He is writing a preface to a book that he has not only not yet written, but also not even plotted or conceived of yet. He notes in the work – “But the principal reason I am writing this preface first is that I prefer prefaces to books any day.” This may go a long way to explaining Saroyan’s frequent appearances writing prefaces and introductions to books, as well as liner notes for albums.

It’s a highly conversational piece, and one that is doing what comics call ‘selling to the folks standing in the back.’ It’s a piece that is best received by writers who will understand the desire to set the cart before the horse, literarily speaking. Looking at it through today’s eyes, connections to present-day authors' Tweet-streams talking about why they’re not writing their current work-in-progress are obvious.

“Portrait of a Bum” appears in the December 1928 issue. Saroyan’s work in Overland tends towards scenario over plot. His prose is slightly denser than that in his other early works, certainly, but he gives some indication of the direction his writing will go in. The sentences are clean, and he shows a distinctive set of choices in beginning many of them with the word ‘to’ which adds to the staccato nature of his writing. He makes good use of word order, giving an initial active push through his use of infinitive statements, like “To be idle, to do anything he liked,” which provides an immediacy of thought and impression while working with the beat.

While Overland may not have been the first to publish Saroyan’s work, it was certainly the most significant publication to publish his work in the 1920s. Harte’s early involvement, as well as having published many of the most important literary figures of the late 19th and early 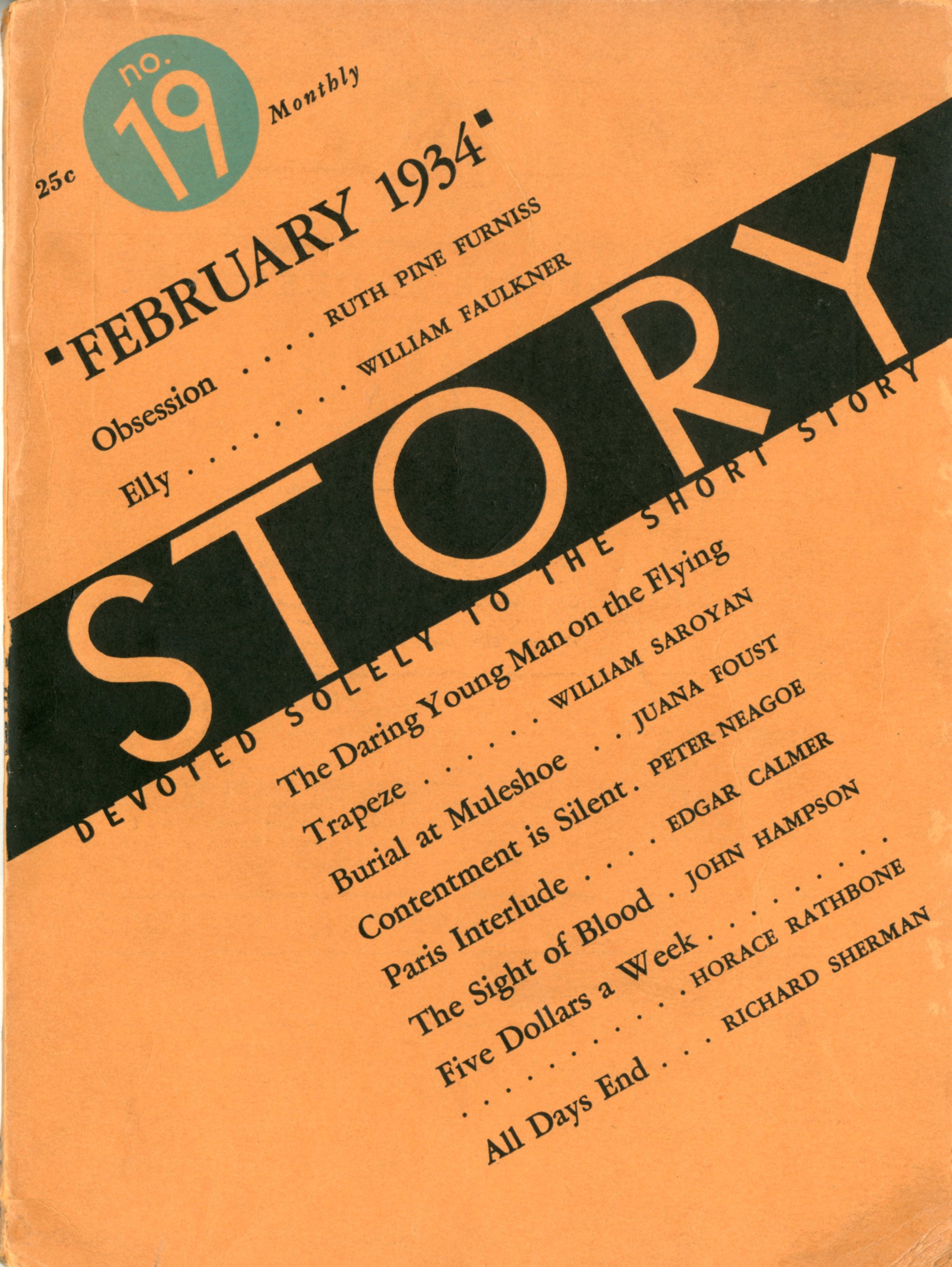 20th century, such as Ambrose Bierce and Willa Cather, gave Overland a sense of gravitas, as well as a strong national readership. It is easily the most well-known of the magazines Saroyan published in prior to his most famous early works appearing in Story starting in 1934.

Saroyan became one of the most famous American authors following Story publishing "The Daring Young Man on the Flying Trapeze", which led to his first collection in 1934. The work he undertook and published in the last years of the 1920s may not have been as Earth-shatteringly important, but it certainly shows the directions that Saroyan was looking towards.

Forever Saroyan, LLC holds the physical originals of The Overland Monthly and Out West Magazine issues of December 1928 and March 1929. Also in our collection are photocopies of the Boulevardier stories, and scans of the San Franciscan piece. Two copies of Follow, and the full run of original issues of The Fresno Bee where it was first published in 2008, were donated to Forever Saroyan, LLC as a part of the Charles Nelson collection.